Effect of Technology on Children and Teenagers

Everywhere you go, teenagers and children appear to be attached to their phones, tablets, or computers. Teenagers will spend up to seven or eight hours a day on their devices. This generation has an addiction to technology, and it does not seem like it will be getting better any time soon.

“The influence of the media on the psychosocial development of children is profound” (Impact of Media Use on Children and Youth). It is important for physicians to talk with parents about their child’s contact to media, along with television, music, and the internet.

Don't use plagiarized sources. Get your custom essay on
“ Effect of Technology on Children and Teenagers ”
Get custom paper
NEW! smart matching with writer

Studies show that 56% of teenagers go online multiple times a day, and 12% go online just once a day. Most of this access is from a mobile device, such as a smartphone. Close to three-quarters of teenagers either own or have access to a smartphone, 30% have a simple phone (such as a flip phone), and 12% say they do not have a cell phone of any type (Lenhart).

Proficient in: Impact Of Technology On Communication

“Technology has a negative impact because it is an attention deficit, it can cause depression, cyberbullying, and it does harm to the physical health of a teen” (Brewster). Teenagers try to multitask, they will be doing their homework then continually go back to answer a text, look at the computer, or watch a show on the television. Children and teenagers are not giving their full attention to their schoolwork so they are not doing the best that they can. Technology is an attention deficit because it makes children and teenagers not want to focus on doing just one thing (Brewster).

Even though technology can be very beneficial to some people, it can also lead to some serious mental issues like depression and anxiety. People who use Facebook daily can see that their mood often will turn negative. Scrolling through Facebook can often make you compare your life to someone else’s and make you envy or jealous of that person. If someone envies the life of a friend on Facebook, they will more than likely show signs of depression (McFadden). Another example of how technology can cause depression is, “Social media shows things such as what the “perfect body” looks like so many people get picked on for being too fat or too skinny” (Brewster). “Technology can cause depression because it convinces teens that there is this such thing as the ‘perfect body’ and it makes teens struggle with communication person to person” (Brewster). Teenagers will think there is a certain way they should look, and some will do whatever it takes to get that “perfect body.”

Another negative aspect of technology is cyberbullying. Although technology is a great way with keeping up with your friends and family members, cyberbullying has become more common, especially for teenagers. The thing that makes online gossiping and harassment so cruel is that it can be done anonymously. It allows these posts to be read by anyone and anyone can join in (Vitelli). “Research studies of young people who report experiencing verbal, physical, or emotional harassment have shown that 18 percent had also reported being cyber-bullied. This same study also showed that 95 percent of cyber victims experience offline as well as online harassment” (Vitelli).

In conclusion, technology has had more of a negative impact than a positive impact on children and teenagers these days. Even though we cannot completely abandon technology, we can be sure that it does not control us.

Effect of Technology on Children and Teenagers. (2021, Feb 06). Retrieved from http://studymoose.com/effect-of-technology-on-children-and-teenagers-essay 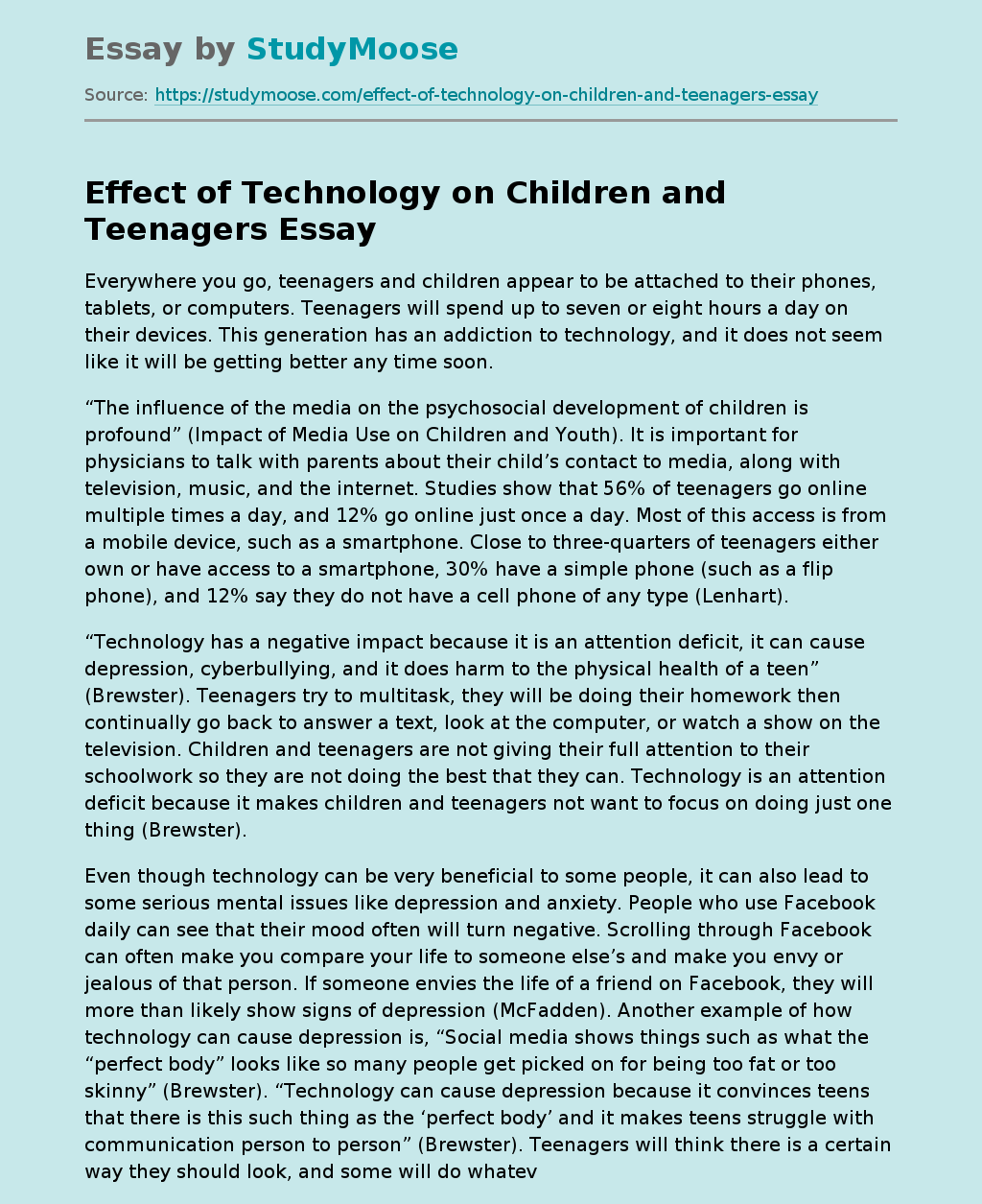