It seems like everyone has a tattoo or piercing these days. In the past, this type of permanent artwork or body ornaments were reserved for outlaws, sailors and biker gangs. Now these body decorations can be found on teenagers. In Dr. Andres Martin’s article “On Teenagers and Tattoos” he explains the significance and function of tattoos and piercings for teenagers. Dr. Martin explains the reasons that teenagers are so attracted to this form of permanent marking on their bodies and why they are getting these adornments.

Don't use plagiarized sources. Get your custom essay on
“ Teenagers and Tattoos ”
Get custom paper
NEW! smart matching with writer

Adolescents are getting tattoos for several reasons, to fit in with a group, to create an individual persona or to create a sense of stability or control over their bodies. Parents and their children are usually at odds over the control of their bodies. This is a explainable cause of such permanent placement of tattoos. Adolescents like to have a sense of stability. They are getting tattoos and piercings to commit to a certain time or event in their life.

These dermal embellishments, like tattoos and body piercings, are set apart by their permanent nature, this is the reason for the appeal to teenagers.

Dr. Martin explains that adults should look at the reasons for the tattoos, instead of immediately judging the teen, to discover and uncover the reasons behind these body decorations. The goal of Dr. Martin’s argument is to get parents and adults to see the reasons why these teens are getting tattoos and piercings. His audience are the caregivers of these teens, as well as the clinicians that help families with teens.

While parents and adults see these teenager’s tattoos as “oppositional and enraging affronts to their authority” (Martin, 1998). Dr. Martin explains that this is not the case, that if parents and clinicians would just show interest in why these teens are tattooing and piercing themselves, they would open a door to communication with their tattooed teen and make a connection to that teen. Dr. Martin’s extensive knowledge about teens along with his credible and logical reasoning is effective for communicating with the audience.

This way of communication creates a trong moral competence conveyed to the audience through the ethos component of his argument. He uses his credibility to show the audience that he is an experienced physician and can be a trusted source that is dedicated to teens and young children. Dr. Andres Martin has performed some extensive research with these adorned teens. He specializes in impatient child and adolescent psychiatry and psychopharmacology. Dr. Martin has written two monographs and three books. Two of the books written by Dr. Martin have been recognized as standard textbooks in the field of child psychiatry.

He primarily serves as medical director of the Children’s Psychiatric Inpatient Service at the Yale Child Study Center (Yale, n. d. ). Dr. Martin is a widely known authority of the behavior of adolescents. He has also served as associate trainer director for Yale-New Haven Hospital’s traditional child and adolescent psychiatry program. Dr. Martin has also helped develop an innovative integrated program that has been adapted by several other institutions (Yale, n. d. ). He has referenced multiple teen interviews in his essay.

He cites interviews from adolescents as young as 13 years old. One 16 year old girl explains the reason that she has facial piercings and that her social connection does not depend on the outside of her body “If I don’t’ fit in, it is because I say so. ” (Martin, 1998, para. 5). With his credibility and knowledge, Dr. Martin logically explains that different teens get tattoos and piercings for different reasons. Using Dr. Martin’s logic, he lists different times and reasons in a teen’s life and why they would succumb to such permanent scarring.

As parents and clinicians, the audience should care about understanding the meaning behind these outcries. He also states that teens are worth asking why, or what is the reason behind the tattoos. Dr. Martin wants his audience to understand that the reasoning or logical explanations behind the tattoos and piercings are more important than the sight of such a tattoo or piercing. One logical explanation or the logos argument method that Dr. Martin uses is that some teens are getting these tattoos and piercings because they have no control over their bodies.

He states “teenagers feel prey to a rapidly evolving body over which they have no say, self-made and openly visible decorations may restore an adolescents’ sense of normalcy and control” (Martin 2013). By marking their bodies, these teens are gaining more confidence and control over a natural uncontrollable condition, like puberty. This is a symbol of their power and independence during the pubescent stages. These tattoos and body piercings are seen as personal and beautiful statements, to the teens (Martin, 2013).

Some adolescents are permanently modifying their bodies for logical reasons as stated in Dr. Martin’s essay. They are using these colorful methods of communication, wanting people to ask what they mean. Teens want people to listen. Using evidence like an interview or case study can pull the audience emotionally using the pathos elements of an argument. By using statements made by tattooed teens, he makes the audience see examples on why these teens get tattooed. Dr. Martin uses his own clinical experience to guide the audience into his thesis statement.

Sometimes teens get tattoos and body piercings for independence, “Tattoos and body piercings can offer a concrete and readily available solution for many of the identity crisis and conflicts normative to adolescent development. ” (Martin, 1998, para. 4) This is explained by Dr. Martin stating that teens today are looking for reasons to fit in, and if they do not fit it, its on their terms (Martin, 1998). This argument for emotional ownership of the teen’s body is effective for the audience because they are the people arguing with teens over that control.

The teenagers are trying to gain control over their ever-changing body and parents are trying to keep control over their teens. With all of this, pull-push struggle for control, teens are naturally striving for stability. Adolescents are looking for and determined to find consistency. They are listed in the article as getting tattoos for a stable foundation or a sense of belonging to an emotion, person or event (Martin, 1998) The examples are contracted by the significance of the tattoo, at a certain time period of a teens life.

For example, something extremely important today may not be of much importance tomorrow, or next week, or next year. Teens are becoming more independent and gaining more control over their bodies by creating artwork on their bodies with piercings and tattoos. There are many ways to appeal to the understanding of the parents to these tattooed teens. Dr. Andres Martin uses a combination of credibility, individual stories, and reason to create an effective argument. The audience of parents and clinicians should be convinced by the knowledge that Dr.

Martin has on the subject of teens or adolescent psychiatry. He uses his ethos principles by quoting various case studies and extensive experience to solidify his claims. Dr. Martin uses the pathos elements of the argument to ask the audience to not judge a teen by the colorful use of art on their bodies, but to ask why and to become sensitive to the internal reality that is going on inside the teen. This can pull to the emotional side of the audience. There are many different reasons why teens get tattooed and pierced.

They are looking for independence or control over their bodies. They can try to signify a certain emotional time period or event during their lives. Teens also get tattoos and piercings because they do not want to succumb the cliques of everyday teenage lifestyles. They want to be an individual. Dr. Martin is successful with his audience by giving them the significance for, the reasons behind and explanations on, the emotional behaviors of these teens. This is important to his readers as they move forward in the care of these teens. 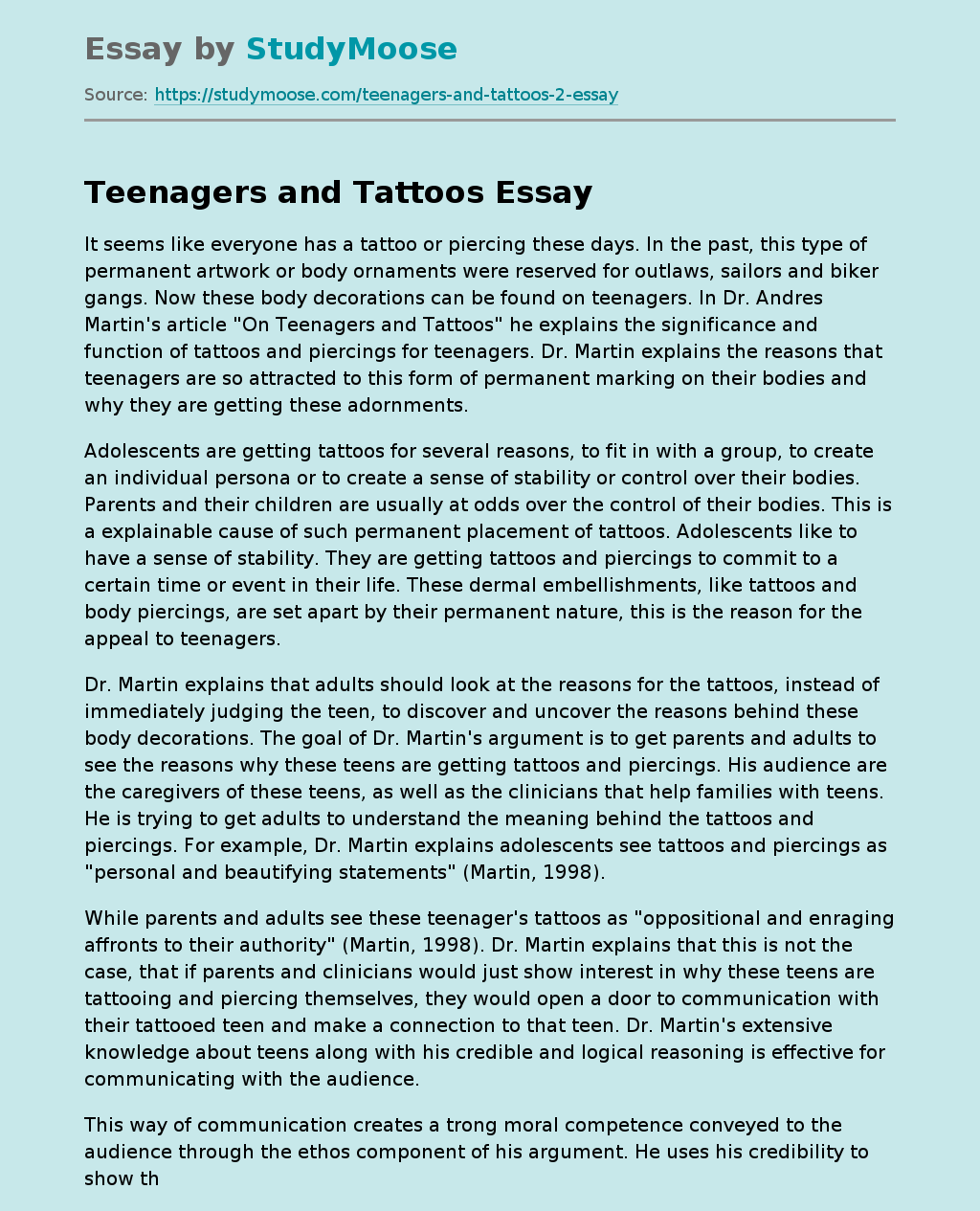