Compare and contrast essay on Teenagers

There are a lot of disparities between the every day lives of modern teenagers and those of a century ago. It is impossible for teenagers to recognize the differences exclusively, except when they are told by their parents. The mindset of teenagers keep changing so that they can accommodate both the technological and other changes that occur since people live in a dynamic world. The differences can also be explained on the fact that individuals have their own beliefs and thus teenagers should be allowed to make their decisions.

Don't use plagiarized sources. Get your custom essay on
“ Compare and contrast essay on Teenagers ”
Get custom paper
NEW! smart matching with writer

This is a compare and contrast paper between the every day lives of modern and a century ago teenagers.

Technological development has boosted both industrial production and mobility levels, while globalization has improved communication across the globe as well as enabling swap over of socio-political beliefs. For instance, there are a lot of political revolutions around the world such as upheavals in Syria, and the Arab Spring.

Taking into consideration these among other factors, it is easy to conclude that there are a lot of differences between the social procedures today and those of a century ago. Concurrently, certain social groups such as teens get exposed to the effects of technological, social and political changes. This can easily be identified when evaluating modern teenagers’ hobbies, preoccupations, utilization of leisure time as well as their behaviors as compared to the teenagers of a century ago (Connors, 2011).

Modern teenagers rely on social networking to communicate their opinions.

They interact socially and can discuss schoolwork on video calls. Modern teenagers can also hold house parties among other indoor parties which is completely different from the way the teenagers of a century ago conducted their parties. The modern teenagers are thirsty for change and are globally aware in most cases. Modern teenagers have partial access to acquaintance and can communicate their opinions in impartial areas through the anonymity of social network. There are various dramatic changes since there are various latest forms of media such as internet and television. The emphasis of values and family structures today are very different from how they used to be a century ago (Seth, 2005).

People’s outlook and goals are different and due to these among other changes, the life of modern teenage is harder than it was a century ago. A century ago teenagers lived in a sheltered life as compared to the modern teenagers. Present day teenagers hear and experience various instances of violence within their societies, they also understand occurrences across their country and the world (Haag, 2000). Modern teenagers use various technological devices such as smartphones, tablets, computers and television sets at home and school. Technology has taken the place that was traditionally assumed by teachers and parents. This can be identified by evaluating the teaching materials as well as the communication and social skills. Teenagers are the major targeted audiences of social media, where they waste a lot of time instead of utilizing it constructively (Connors, 2011).

Teenagers of a century years ago lacked access to present technology. They attained acquaintance through extensive reading, from parents, they also spent their leisure time helping their parents with house chores or playing outdoors. A century ago, education was an aspect of society though it was not highly stressed. Male children were given privilege to access education, however many faced financial constraints. Century ago social norms did not allow girls to assume similar roles with their male counterparts. Girls were left to attend household chores and thus they were mostly restricted to domestic field. Movements across the world in present times are very significant since they have helped to improve the plight of women. Modern female teenagers can liberally explore same careers and opportunities as young men (Connors, 2011).

In conclusion, there are a lot of differences between modern teenagers and century ago teenagers. Present youths are used to technology as compared to teenagers of a century ago. There is also improvement in gender due to gender equality where modern teenagers have equal access to opportunities. There are major differences in traditional values and family structures. The major cause of these differences between modern and century ago teenagers is social-political and technological changes. Today’s teenagers entirely depend on social networking for communication and as a way of acquiring knowledge while century ago teenagers got knowledge from their parents and extensive reading. Today’s teenagers also tend to test the social norms unlike their counterparts of hundred years ago who were conservative to social norms. There various changes in fashion, styles and technology.

Abstract
Developments in the world throughout the years have greatly impacted the world in various ways. These developments include technological and socio-political changes. These changes have made social activities today to become incomparable with those from a hundred years ago. In this case teenagers as a social group have fell victim to these changes as. This fact easily unveils itself when evaluating the social activities of the youth today. Their behavior and the use of their leisure time are also compared to that of their colleagues a hundred years ago. Keywords: technology, behavior, social activities.

The daily life of teenagers today and that of young people 100 years ago. Teenagers today make use different types of technological devices, such as TV sets, smartphones and tablets-both at home and school. They also acquire education with the aid of technology. The help of technology in education has replaced the role that parents and teachers used to play in the education of their children. Not only does this refer to the teaching material and method but also to communication skills. Connors (2011) explains that the main target audience for social media is young people. They waste an insanely huge amount of their time on social networks rather than using it for wise constructive activities (Connors, 2011, p. 45). Presently, teenagers are more educated than they were a hundred years ago. Education that is easily accessed makes the youths more socially active.

As a result, they tend to question the traditions of society. By so doing the young people have become great contributors to change in society, as Silling (2010) describes (Silling, 2010, p. 256). A hundred years ago were conservative and followed customary traditions set by society. This made them inactive since they lacked access to quality education. Connors (2011) explains that teenagers in the old times lacked technology that is available to teenagers today. Their knowledge was not only acquired from their parents but also through extensive reading and used their free time to help their parents around the house and played outdoors (Connors, 2011, p. 67). Back then, education was a part of society that was not highly embraced. Financial challenges that faced many families hindered parents from taking their children to school hence education became a privilege, mostly, for male children.

The culture of the people a century ago did not view females as equals to males. As a result the girls were hardly allowed to take part in the same activities as the boys. Domestic management was an activity fit for women so girls were limited to activities within the domestic sphere. On the other hand, female teenagers today are freely entitled to the same opportunities as their male counterparts. This has been made possible by female movements around the world. It is significantly evident that there is a great difference between the present teenagers and teenagers a hundred years ago. Presently the youth are more used to technology than their colleagues a century ago. They are also more educated compared to their counterparts a hundred years ago. All over the world there has been gender equality in terms of entry into various opportunities unlike a century ago.

Compare and contrast essay on Teenagers. (2015, Oct 14). Retrieved from http://studymoose.com/teenagers-essay 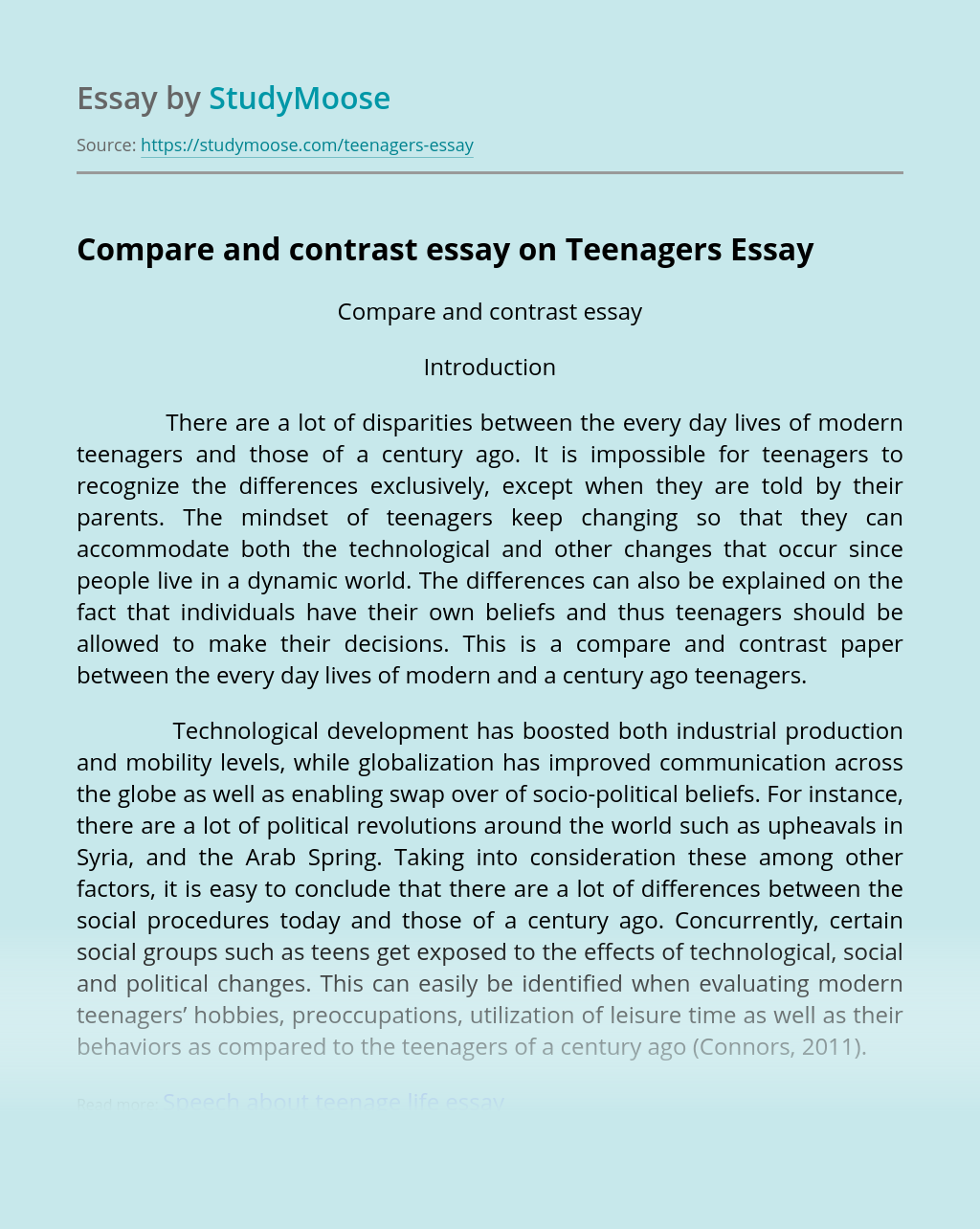