Language Analysis the Power of Ink

Helen Day is a part-time journalist and blogger. She maintains her blog entitled Street beat on a variety of current social issues. This blog entry, The Power of Ink, is about tattoos and it has drawn a variety of responses from readers of her blog.

In recent years, the practice of ‘inking’ your body, or having tattoos indelibly imprinted on your skin has become almost ‘de rigueur’ for many in our society, especially the young. There is a wide variety of views about this practice and Helen Day, a regular blogger, has her say in her entry ‘The Power of Ink’.

Don't use plagiarized sources. Get your custom essay on
“ Language Analysis the Power of Ink ”
Get custom paper
NEW! smart matching with writer

Rather than lecturing her substantial audience of followers, Day chooses simply to trace the stages of the history of tattoos, focusing on the changes in their meaning and significance. Her use of examples and language with negative connotations is effective in arguing that people who choose to ‘adorn’ themselves with tattoos are just as much victims or prisoners as those for whom they were originally intended.

Her blog attracted four extremely varied responses within the next twenty four hours, showing that this is indeed a contentious issue. Helen Day begins by establishing the ubiquitous nature of tattoos. In a light-hearted, humorous fashion, she mentions that people from all walks of life, including ‘suburban housewives’, ‘newsreaders and sitcom stars’ have words and pictures ‘draw[n]’ on their skin.

Even at this early stage, she mentions ‘prison’ and readers may feel uncomfortable with this reference, which is just what the writer intends.

She clearly states her contention that ‘the power of ink has diminished’. Day begins her argument by clearly establishing the original purpose of tattooing, using examples from ‘millennia’ as support. She mentions the origins of the practice where the ‘unconsenting backs of prisoners and slaves’ were marked to show that they were owned, ‘deviant’ or ‘incarcerated’. She goes further to remind readers of the literal and metaphorical ‘indelible cruelty’ of the tattoos forced upon inmates of the Nazi concentration camps during World War 11. Her words are carefully chosen at this stage of her argument to create a feeling of unease and repulsion in her audience at the idea that tattoos represented ‘ownership’ or ‘control’ and that those on whom they were imposed were considered to be ‘somewhere between property and machine’.

By associating tattoos with lack of free will or self-determination, she predisposes her readers to think negatively of the practice of tattooing, even before she considers what it represents in contemporary society. Day goes on to provide an illustration of how those forced to wear tattoos resented this imposition and how they showed their refusal to be controlled, satirising their ‘owners’ by adopting their own version of an owner’s mark. She connects this act of ‘defiance’ to the motivation behind her decision to demonstrate her ‘feminist’ principles in the 1990s, wryly remarking that her attempt to protest and be unique fell flat because now ‘even’ the British Prime Minister’s wife has an ankle tattoo. The language the writer uses here is quite mocking of her young self. She separates herself from the young Helen, representing her actions as cliché and immature, in an attempt to position her readers to view it in the same way. The comment from young ‘Tash’ (written late at night) is a perfect example of such (some might say misguided) youthful impulsiveness.

Readers can hear the excitement in ‘Tash’s’ ‘voice’ as she describes how she ‘designed [her] own ankle bracelet’ and how she likes to ‘show it off’. The use of language such as ‘like’ and ‘yeah’, suggests that she is very young and may one day regret her decision just as Helen Day does. The comment from ‘Cleanskin’ also echoes Day’s point that tattoos ‘fade’ and ‘stretch’ over time and may not suit an older person. These responses underline the writer’s message of ‘act in haste, repent at leisure’ and young readers may cringe when reading ‘Tash’s’ enthusiastic comment. Day concludes her blog entry by redefining the social meaning of tattoos in today’s society. She describes them as having been ‘commodified’, that is, just something else to be bought and sold and with no real significance. She uses the expression ‘try hard’, suggesting that people who have tattoos are doing so to create a false image of themselves in order to find acceptance. Readers would certainly not like to be included in this category. By describing tattoos as ‘fashion’s proprietary mark’, she is claiming that those who decide to tattoo themselves are just as much slaves and prisoners as the original bearers of these marks, it is just that their owner is now ‘fashion’.

In suggesting that tattoo wearers are still under the control of an outside force, that fashion trends are dictating their actions, she hopes that readers will review their attitude to the practice. The contrast between the two accompanying images starkly demonstrates the writer’s argument that the meaning of tattoos has changed. The Ta Moko on the arms of the three Maori men clearly mark them as members of the same clan. The three tattoos are identical to each other, suggesting that the design is traditional and has a particular significance for the wearers. ‘Kiwi’s’ indignant description of non-Maoris imitating the ‘sacred’ Ta Moko as ‘identity theft’ would act as a strong disincentive to readers to undertake such a ‘disgraceful and immoral’ action. The other shoulder tattoo of a star, shown on the front cover of Sam de Brito’s 2006 book, might well have been designed by the wearer, but it has none of the cultural ‘weight’ of the Ta Moko designs.

The images reinforce the idea that it may be fashion that is dictating the current trend to tattoo one’s skin. This blog is certainly cause for thought. Although Helen Day sets out to argue that ‘the power of ink has diminished’, she actually argues against this. In establishing the contention that tattoos are still just as powerful a message about ownership, but that the ‘owner’ has changed from government and slave owner to the tyrant of fashion, she prompts her online audience to rethink whether in deciding to ‘ink’ themselves they are actually being a ‘unique’ rebellious individual or just another fashion victim.

Language Analysis the Power of Ink. (2016, May 08). Retrieved from https://studymoose.com/language-analysis-the-power-of-ink-essay 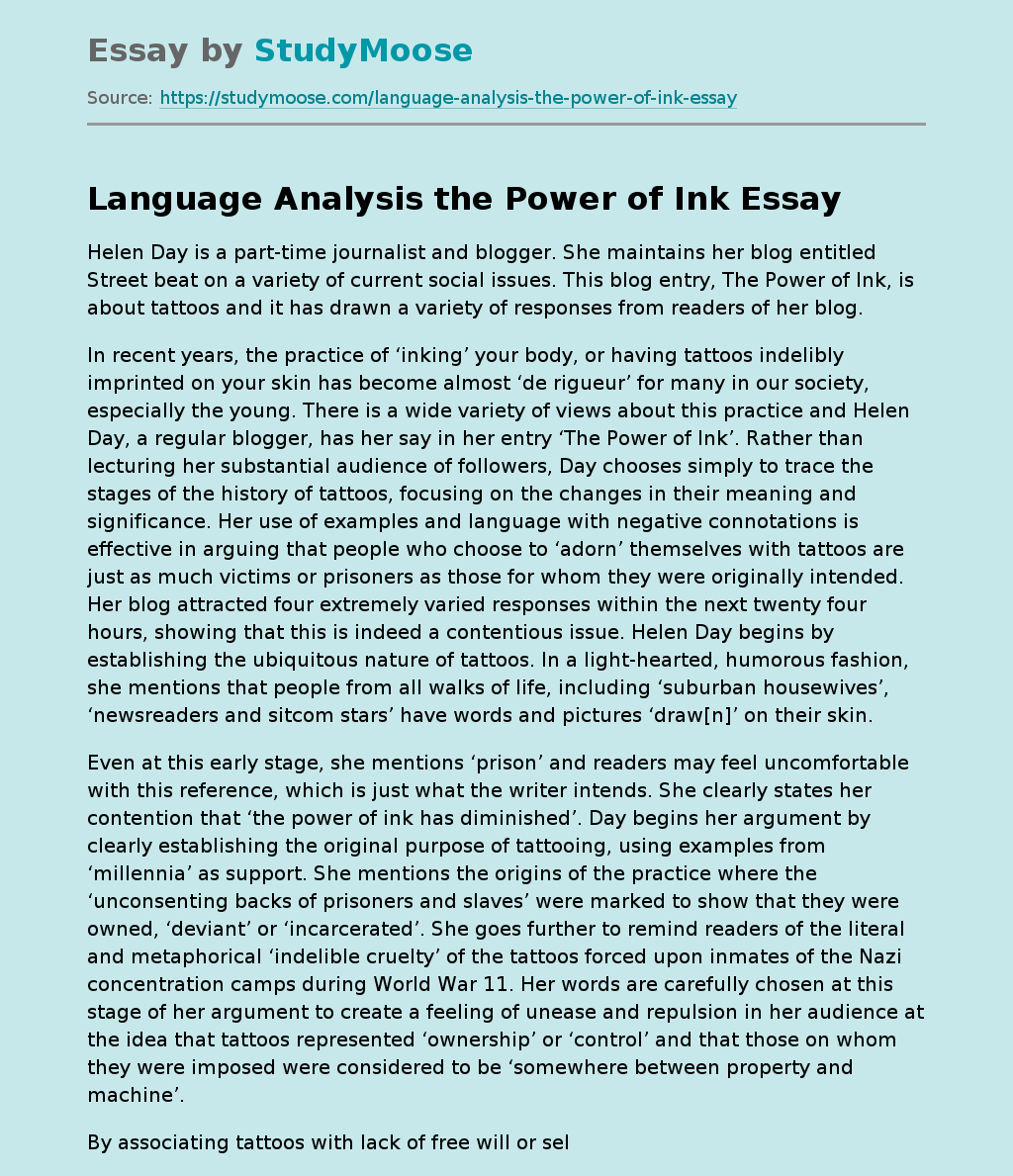