Teenagers Should Be Given Freedom and Ruels

Many Parents set up rules, and other boundaries in which their teens must follow. These rules are usually placed over their teens to control, protect, and teach their teen. Even though most parents mean well, and some rules are necessary it’s easy to overwhelm teens with regulations. First of all teens are not going to follow all of the rules, and secondly there are some things that certain teens will not do with, or without a specific rule on that subject.

Don't use plagiarized sources. Get your custom essay on
“ Teenagers Should Be Given Freedom and Ruels ”
Get custom paper
NEW! smart matching with writer

For example, there are many teens who would never use drugs, but by placing a rule on this, the teen might not feel trust worthy, and might be more likely to try drugs. This is not always the case though, some teens need every rule stated, or they might test your patients. Parents should remember that they know heir teenager best, and they need to set rules according to their own teen.

Drugs and other illegal things are often a problem with certain teens, but some teens will never try drugs. Teenagers will turn to drugs for answers to problems. To avoid having problems with your teen, spend time with them and talk to them. In dealing with a teen who has taken illegal drugs, you as a parent need to try to understand why you teen has committed the crime. Only when you understand the child, then you can give the appropriate punishment. Another important factor in discipline is to make sure that the teen understands why what they have done is wrong, and show them scripture to explain it.

If a child does not know why what they have done is bad, they will likely do it again. A parent needs to make sure that their rules do not contradict each other. It is easy to restrict one bad influence, and not another. Many parents feel that they need to whom their teen hangs out with because of their friends’ language, and general behavior. This is often the wise thing to do, but if you restrict this, but still allow your teen to curse or watch improper movies, and TV the restriction of certain friends will just confuse your teen. Curfews are often needed to prevent teens from getting into trouble late at night. A curfew should slightly vary depending on where the teen are, what they are doing, what they are planning for the following morning, and who they are with. If your teen is with responsible adults whom you know , a curfew should depend upon plans for the following morning if there are any. When your teen is with his friends a curfew should depend upon how trustworthy your teen is. If your teen has broken curfew rules in the past, then an earlier than usual curfew would be reasonable, but if your teen does not have a bad record and if they are trustworthy they should be given more freedom, and take their opinions into context when giving a curfew. Some well-behaved teens can be given almost full responsibility when comes to curfews. Curfews are usually most necessary for dating. Parents cannot always give their teen permission to stay out all night on a date. Teens can get into too much trouble when on a date late at night especially if they have a car. It is best for a parent to make wise decisions based on each individual teen. When a teenager takes a car the teen should have a responsibility to take care of the car, and respect other drivers. Some parents find it effective to require their teen to help pay for gas, plus insurance, or buy their own car, and pay for it themselves. This way the teen feels a sense of ownership, and is more responsible for what is theirs. Teens often spend many hours on the telephone. I used to spend a lot of time on the phone. One solution to this problem is to get a separate telephone line for the teens in your house, or at least a separate telephone line for the computer. When setting up rules and regulations the best things to do are make sure your teen understands the reasons for the rule, remember to follow God’s standards when making rules, and be fair. Proverbs 24:3,4 Through wisdom a house is built, And by understanding it is established; By knowledge the rooms are filled With all precious and pleasant riches.

Teens Should Be Allowed More Freedom

Do you feel like your parents restrict you? Not only that but do you feel like your friends are allowed to do so much more than you just because your parents don’t let you do the stuff you would like to? Sometimes you need to put yourself in your parent’s shoes and see how they feel. But, do you do that and you still feel like it’s unfair and your constantly never able to do anything? I think some parents don’t allow their teens to have the freedom they should, and doing that just smothers not only their freedom, but their well being as well. When you are about 9 months old, your parents let you try and pull yourself up and to stand. At about 16 to 17 months your parents give you the freedom to walk.

Your parents give freedom by letting you attempt to stand and take those first steps. If you were held at all times and not given the freedom to stand and learn how to take those steps, you could not learn to walk. As we grow older they seek freedom and more independence. But sometimes along the way we can break our parents trust. Depending on the parent and the teen, because everybody is different, the consequences are different and the adult or parents usually tightens up their grip with the rules.

What does that do? We need to make small mistakes to learn for ourselves and not just from what our parents tell us. For example, you ask to go to a party that you know there will be alcohol at. Your significant other or parent says no because they were a kid once too and know how parties turn out at your age. How is this fair? Most likely they got to experience what parties were like when they were a kid but they put their knowledge of when they were young up against our freedom.

What does it really mean to you if you don’t get to experience something for yourself? It’s like when somebody tells you about this one time they saw a mermaid. Do you believe them, and does it even mean anything to you? Studies show that if a teenager is given more freedom they are more than likely to respect that freedom and make the right choice.

Teenagers Should Be Given Freedom and Ruels. (2020, Jun 01). Retrieved from http://studymoose.com/teenagers-should-be-given-freedom-and-ruels-essay 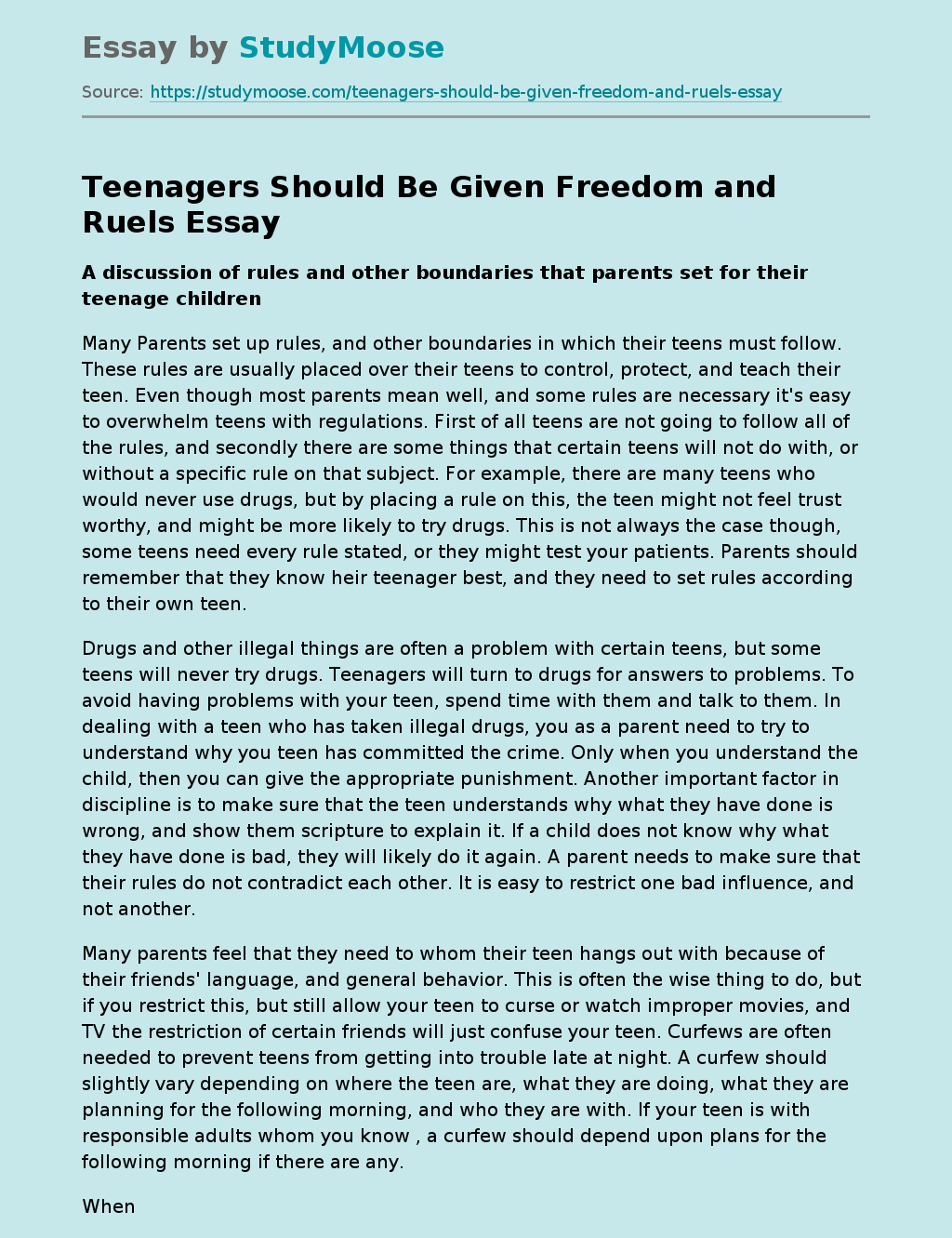