The Effect of Social Media on Teenagers

Contrary to what many people think, Social Media actually has a negative effect on teenagers. Social media is a medium of communication shared by most adults and children, but most especially teenagers. It is sometimes helpful, entertaining and within the reach of the general public. It has become an important mass media around the world. Sadly, this resource is abused and taken advantage by most teenagers, and not used in a way that they could get the best benefits from.

Don't use plagiarized sources.
Get Your Custom Essay on The Effect of Social Media on Teenagers Just from $13,9/Page

It can have negative effects on teenagers like addiction, psychological problems and cyber bullying which can decrease their self-esteem that can lead to depression and possibly self-harm. Many teenagers love social media because of its wide connectivity and function that people can receive it for free; it does not require money to make an account and use it. Facebook is the most visible among various social media. What’s impressive about this site is that you can easily connect with your long lost friends and see how they’re doing, or vice versa.

Though this could get addictive and may divert our attention away from the real world. Like what Cornell University’s Steven Strogatz said; “Social media sites can make it more difficult for us to distinguish between meaningful relationships we foster in the real world, and the numerous casual relationships formed through social media.” I strongly agree with this statement. Also, people become a whole new person, because it’s the Internet. People can be anything or anyone in the Internet. Another issue is the psychological problems it can affect the teenagers. Social networks like Twitter and Facebook also show another problem to one’s emotional development and maturity, according to one study from the University of Southern California.

This study monitored the development and expression of admiration and compassion in response to persuasive, actual-life stories in volunteers. Brain imaging was used to verify the responses. Social networks also messes with their ability to think independently. They’re more likely to change their mind about “liking” some things and posts if they see that it is popular or whatnot, because of course people like going with trend and they want to blend in like the rest.

The Effect of Social Media on Teenagers. (2016, May 24). Retrieved from https://studymoose.com/the-effect-of-social-media-on-teenagers-essay 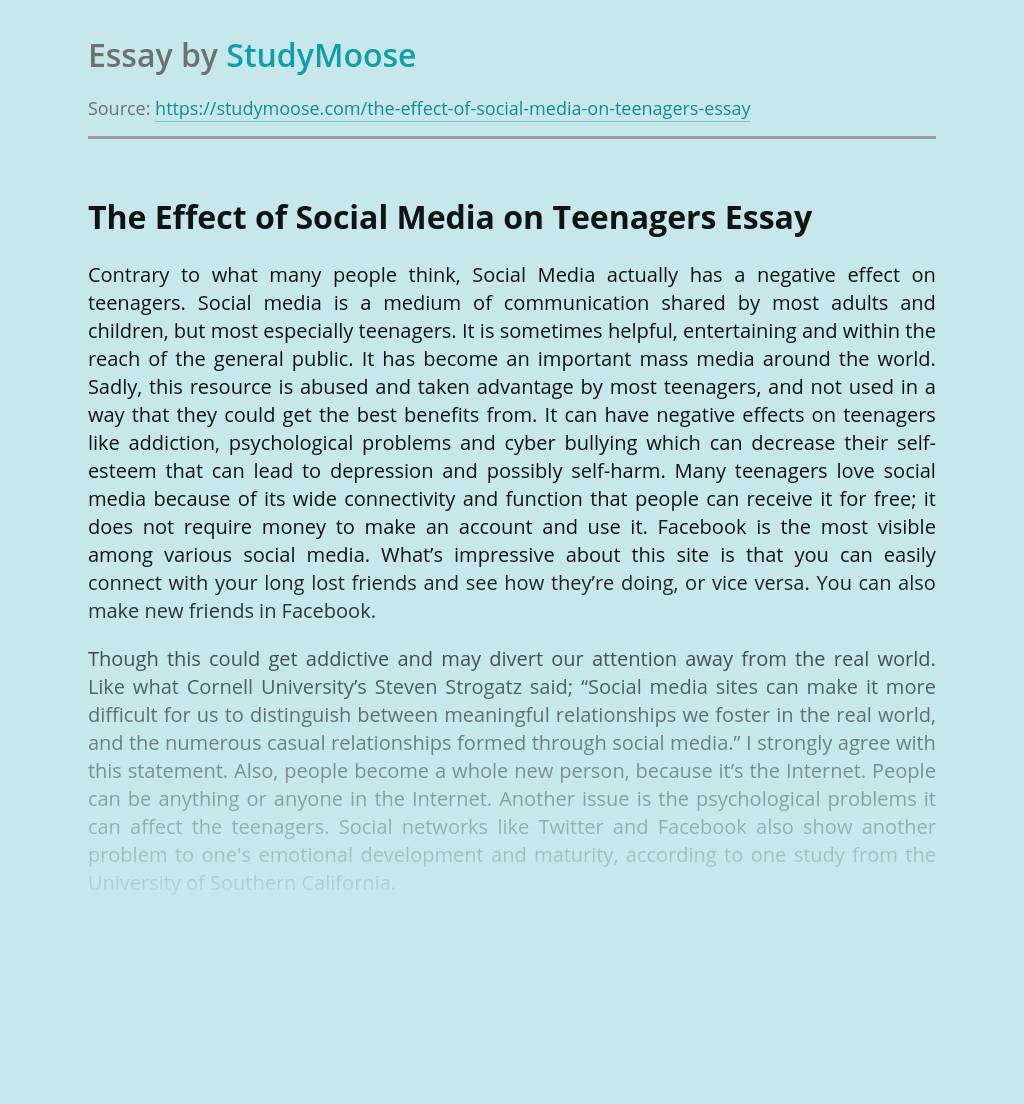 Rate this post Introduction Hasn’t everyone at some point in their life been peered pressured. Teenagers all across America face it every day. It ranges from cheating on a test to robbing a convenient store. Peer pressure is a serious life situation that everyone encounters at a certain point in their life. And let’s face...

Essence and Types of Bullying

Rate this post The definition of bullying is widely agreed on in literature on bullying. 1-4 Bullying is a specific type of aggression in which (1) the behavior is intended to harm or disturb, (2) the behavior occurs repeatedly over time, and (3) there is an imbalance of power, with a more powerful person or...

Get Essay
Bullies Should Be Held Legally Responsible

Rate this post We all know what bullying is. We usually tend to think of it as some huge kid threatening to beat you up if you don’t give them your lunch money. But sometimes, bullying goes so much further than that. Sometimes bullies go too far, and their victims make the unfortunate choice of...

Rate this post Education is the most important factor for the development of human civilization. It is one of the ways that can help us to achieve our goals in the future. However, there have been many problems raised throughout the year in regarding to what our school system should be practicing to improve education....

It Was the Most Wonderful Day of My Life

Rate this post It was the most wonderful day of my life! Maybe it did not mean a great deal for others as it came naturally to them, but for me, it was a bliss. Yes, bliss; I had completely lost hope until Dr Hurree came in my life as a ray of light, enlightening...