The Effect of Social Media on the English Language

Abstract:
Giving the popularity of social networking sites lately, it has made an effect on the English language either in a positive way by adding new words to the dictionary a negative way by misusing the grammar and using incorrect abbreviated words like turning “you’re” to “your’. In this research proposal I would like to investigate what the effect of using social networks has on the English language and see if it was more positive than negative and vice versa.

Don't use plagiarized sources. Get your custom essay on
“ The Effect of Social Media on the English Language ”
Get custom paper
NEW! smart matching with writer

I will be making a survey page to collect data on the way people use these sites. Furthermore, we will see if people know the importance of using proper English and try to make social networking sites improve our way of using the English language.

Introduction:
Technology has changed rapidly in the past five years, we became more reliant on our smart phones and it completely changed the way we communicate with each other in our everyday life, it made it easier for us to interact with people across the world with a single touch through social networking sites, such as Twitter, Facebook and YouTube.

Technology is clearly having some impact on the English language and the words we use. Recently we saw how some Internet words have made it to the Oxford dictionary this proves the impact it made, for example the word “Tweet” which means according to the dictionary: “a posting made on the social networking service Twitter”.

However, some people think that it is okay to misuse Grammar or word spelling on social networking sites, for instance, using “your” instead of “You’re”. So do these sites make a positive or a negative impact on the English language?

Literature review:
A research titled “5 Ways That Social Media Benefits Writing the English language” written by Mallary Jean Tenore in 2013 mentioned some ways that social media benefits writing and language, such as how it increases the awareness of mistakes, when people make grammatical or spelling mistakes people will point them out via these websites therefore we become more aware of our spelling and grammar thus improving our language. She also talked about how it creates new words and meaning, such as “googled”, “tweeted”, “Friended”. She said that it also spotlight short writings meaning it valued short storytelling with Vine videos where you have just six seconds to give a message and in twitter you only have 140 characters to use which forces you to make every word count.

Another research called Social networking: teachers blame Facebook and Twitter for pupils’ poor grades written by Andy Bloxham in 2010, it talked about how teachers blame Facebook and Twitter for kids’s poor grades, he said kids spend too much time online which makes it harder for them to concentrate in class, they become more distracted and have shorter attention spans as researchers found. Teachers also are very unhappy that students are replacing words like “Tomorrow” to “2mor” or “message” to “msg”, it also discusses how the kids with the poorest grades are the ones who spend more time on social network sites. This research discusses how social media affect the student in school.

Significance of Research:
This research is important because it casts a light on how people use the English language in these sites some of them are more aware of using correct English and some of them are looking to save some time by shortening words and phrases. We have to keep track of which way it is going so we do not lose our beloved English language.

Ethical Considerations:
The participants will no be in any kind of danger, it will be a simple survey that they will take in the comfort of their own home, it will be a group of people who use these sites regularly, they will be aware that it’s for research purposes and it will be completely anonymous, it will be safe and easy for both parties.

Limitations of the study:
There is a lack of reliable data on this subject; there are no books that discuss this topic. I think that is because this is a new study matter and
not many researchers have looked into it yet.

Expected results:
I expect to find out if this phenomenon of social media is both good and bad and that it depends on the person using these sites. I also expect to find some data concerning this issue and if it is more good and beneficial to the English language or not.

Conclusion:
Nowadays English has changed so much so fast, some of it is good and positive change and some of it is not. The question now is how English is going to be different in 10 years? Will it be like how we speak now? Or will it change even more? One thing for sure is that the English language can adapt to change so easily unlike other languages, I think we will see some huge changes in the future.

The Effect of Social Media on the English Language. (2016, Mar 09). Retrieved from https://studymoose.com/the-effect-of-social-media-on-the-english-language-essay 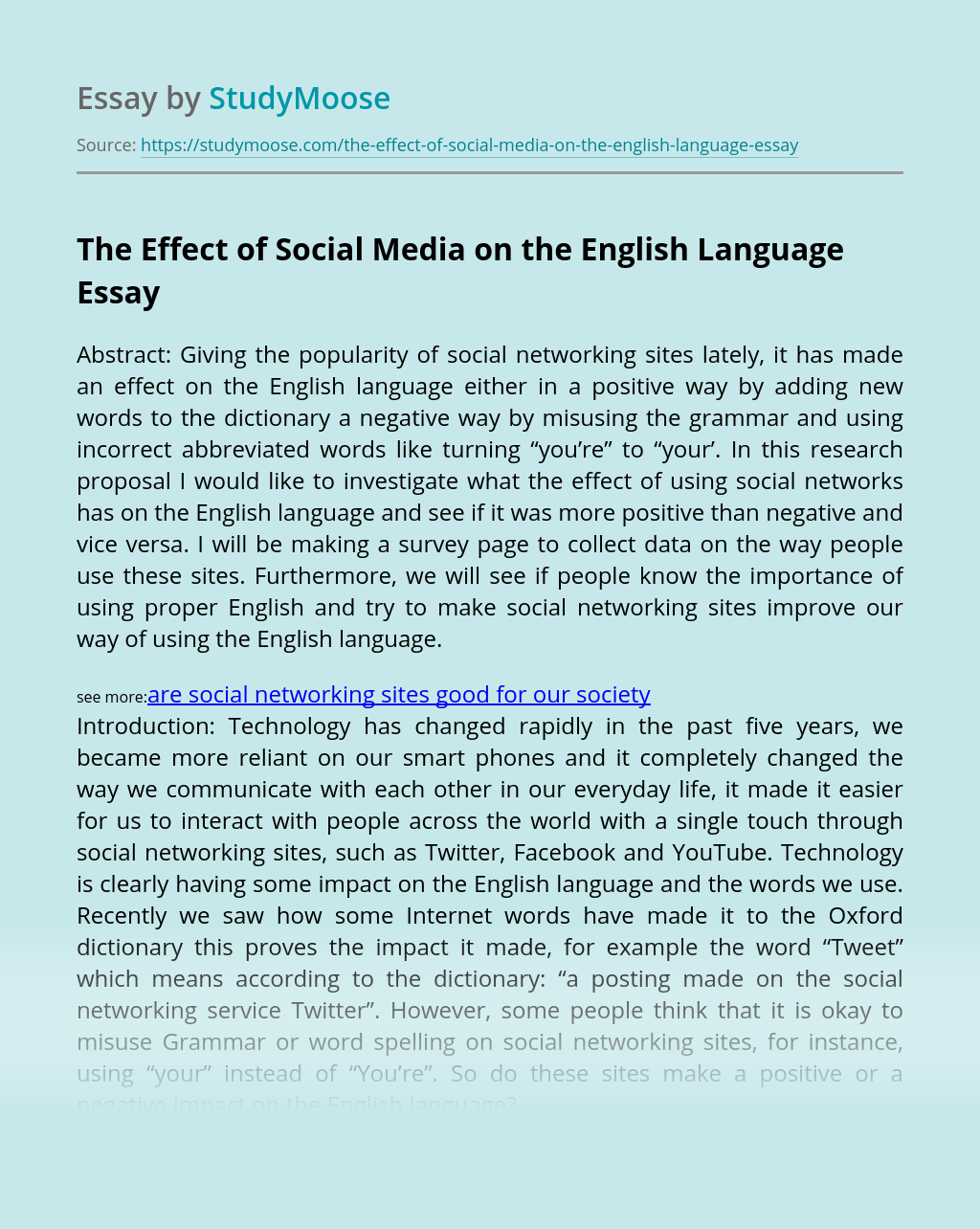