The Globalization of English and the English Language Classroom

The term ‘the globalization of English’ can be interpreted in at least three ways. It can refer to the increasing intrusion of the English language into the lives of town and city dwellers all over the world. This is a worrying phenomenon. Not only does it threaten to contaminate or wipe out local languages and cultures, but it also skews the socio-economic order in favour of those who are proficient in English. How should the non English-speaking world react?

The globalization of English can also refer to the rapid spread of English as a second and foreign language.

Don't use plagiarized sources. Get your custom essay on
“ The Globalization of English and the English Language Classroom ”
Get custom paper
NEW! smart matching with writer

The world’s non-native speaker (NNS) to native speaker (NS) ratio for English is estimated to be between 2 to 1 and 4 to 1. With this preponderance of NNS speakers of English, it seems clear that NNS–NNS communication is far more common than NS–NS or NNS–NS communication; in other words, English used as a lingua franca (ELF) is by far the most common form of English in the world today.

Should learners in expanding circle countries therefore continue to look upon NS English as their model? Or should they follow the example of outer circle countries and confidently develop their own standards of English based on effective NNS–NNS communication? How much should English teachers around the world know about and even participate in this development? Finally, the globalization of English can refer to changes taking place in all varieties of English due to contact with other varieties.

Does this mean that English will become more homogeneous, unifying around one world standard? Or will it perhaps lead to NSs losing their role as custodians of the language? Some consequences of the globalization of English in two rapidly developing countries, South Africa and India: South Africa is often counted as an inner circle country, yet the majority of its citizens are not native speakers of English; in fact, it would be more accurate to locate South Africa in the outer circle.

Poverty can condemn speakers of English as a second language to low English proficiency, which in turn blocks access to better-paid jobs. Those who, through language, are excluded from the chance to improve their socio-economic position naturally prefer to become more proficient in English rather than preserve their mother tongue. This spread of English to other social classes has nothing to do with linguistic imperialism, which is ethnically based, but is part of a class-based struggle.

People need the opportunity to become high-proficiency bilinguals before they can become concerned with preserving their L1. A similar situation in India exists in India: global English and IT ensure that economic (and political? ) power belong to the ‘whiz kids’ of the new elite, whose parents can afford to send them to English-medium schools. Research on English words assimilated into the German language showed that this phenomenon had been going on for some time, but had recently intensified. The German language is in no way threatened by borrowed English words.

An analysis of Aviation English, the formally prescribed and artificially restricted lingua franca used by pilots and air traffic controllers, shows that NNS pilots and controllers also need to be able to understand spoken NS English, and that their NS colleagues should be made aware of communication difficulties caused by deviation from Aviation English phraseology. The nature of the global English lexicon can be imagined as the product of verbal interaction in the Englishes of speakers from the inner, outer and expanding circles.

Since the newly developed lingua franca varieties of English have not yet been codified, Standard English (i. e. NS English) should continue to be used as the linguistic model for ELT in Europe, although ‘teaching models will have to become as tolerant of errors as possible’. Standard English is in fact something linguists find rather hard to define. NS English does not always provide a model for NNSs, reporting on how international students become disillusioned in their desire to imitate NSs when they encounter local dialects during studies in Britain.

As a result, many students change their goals from sounding like a NS to understanding NSs and being understood in their own NNS variety. The extensive and easily accessible presence of English in many European countries, both inside and outside schools, is leading to different groups of learner-users creating ‘their personal language environments according to their individual needs and capacities’. This situation, as well as differing attitudes to learning English, helps to explain differences in teenagers’ English proficiency.

For many Europeans, English is often learnt as a third language, facilitated by previous language learning and contributing to general language awareness. But what model of English do proficient European learners feel most comfortable with? Students are fairly open to teaching materials that include a variety of NS and NNS accents, and generally receptive to the notion that the main pronunciation objective should be international intelligibility as opposed to near-nativeness. However, when survey questions become concrete (e. g. hether or not to correct ‘s’ for ‘th’ or ‘if you would be’ for ‘if you were’), the majority vote for correction towards the NS model. This only reflects the fact that future teachers have not been adequately exposed to the concepts and related decision-making implied by an acceptance of NNS English as a suitable model for German pupils. NNS teachers admit that they rely on textbooks, apply their knowledge of the differences between the L1 and the L2, use the L1 as the medium of instruction, are sensitive to the needs of students, know the students’ background and have exam preparation as the aim of teaching.

The Globalization of English and the English Language Classroom. (2020, Jun 02). Retrieved from https://studymoose.com/globalization-english-english-language-classroom-new-essay 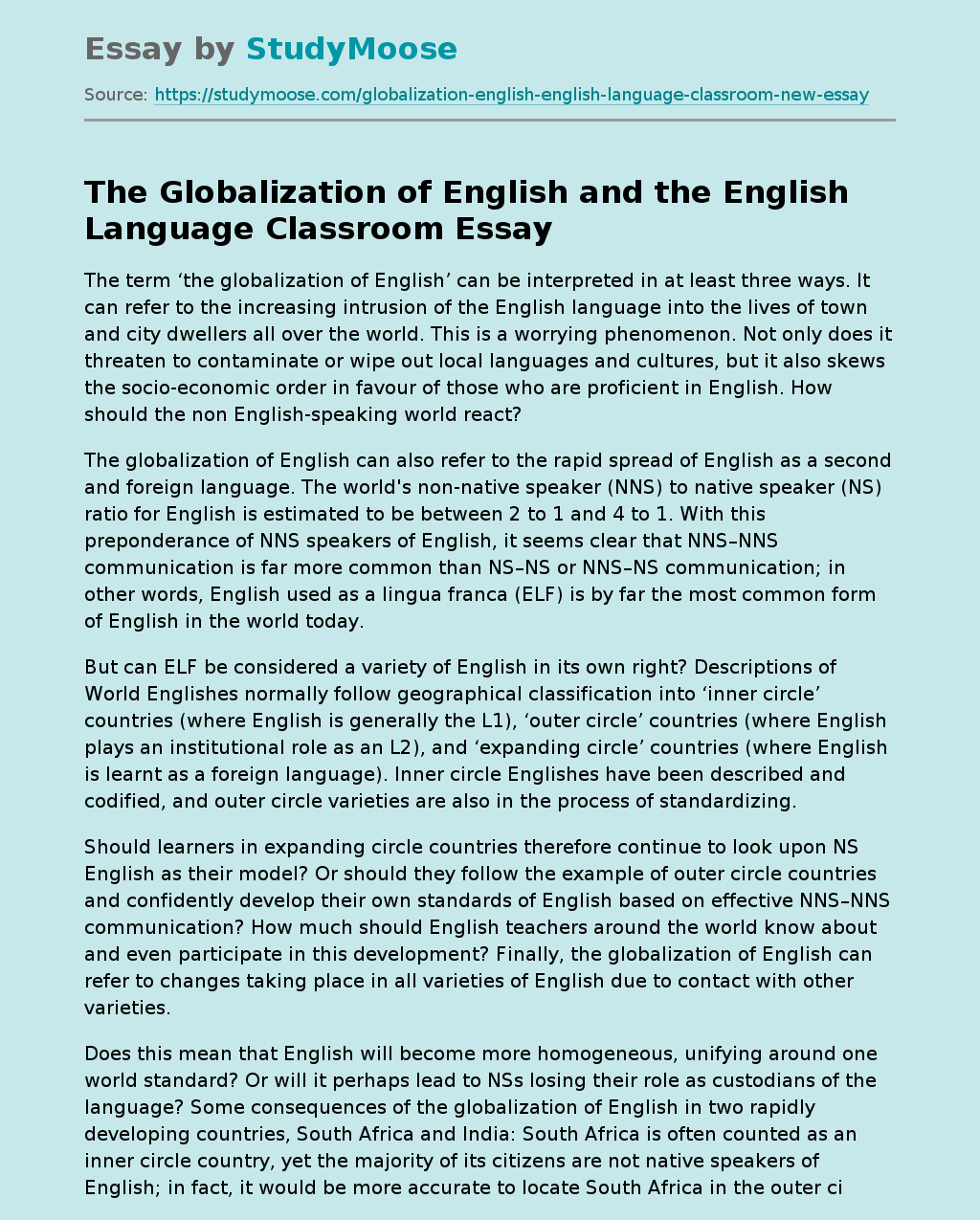