Advantages And Disadvantages Of Social Networking

The world of technology and communication has changed rapidly during this millennium era. We can not avoid that and as a matter of fact we will be lag behind if we do not follow it. Information Communication and Technology or ICT has become the major role to bring the world into a more modern and develop. ICT has also shaped the world to be more dynamic than ever before. The world of education get the effect on the rapid changes of ICT.

Turn in your highest-quality paper
Get a qualified writer to help you with
“ Advantages And Disadvantages Of Social Networking ”
Get high-quality paper
NEW! AI matching with writer

Education now have to adapt with the ICT, if not then there will create gap within education and the society. The education world now is also getting more improve by using ICT. Social Networking or Social Media such as facebook, twitter, WhatsApp and other alike is also product of the development in ICT. Not many people realise that social media that are used by so many people in the world can be used for language learning. Social media provides the learner with the possibility of participating in actual, real-time, relevant conversations taking place online, and practicing the target language with or without the help of an experienced teacher by his or her side.

Though, there are many opinion regarding the topic, this article would like to limit on the advantages and disadvantages of social networking in english language learning.

The social networking sites focus heavily on building online communities bound together with common interests or activities. Thereby provide them with tools that help them to do so. In the field of education social networking sites encourage students to engage with each other and to express and share their creativity. Social media is also one good way for students to gain knowledge which can be from outside their classroom activities. So many social media they can share and discuss many things related to their need of particular knowledge with others practically. With Social networking can create a better English communicative environment for students, they do not have to go to the country where the mother tongue of English is, they just connect to the internet and interact with people from English speaking countries. And they do not need to meet physically, and it also improving the efficiency of class teaching. English teaching can make the lessons more effective and efficient. Many social networking sites offers the users many applications that make them easy to get any benefit including in english language learning.

The most important feature of the social networking site is the ability to give and receive feedbacks. If this feature was not there, the world of social networking would not what it is today. Any content that you post instantly starts receiving comments, likes, reviews, opinions, and additional information on that topic . By doing this, it can create discussions, sharing ideas and other communicative skills which use english as the language in the discussion. Social networking can encourage students to upload images or videos related to the courses. Some teachers even ask their students to upload their essays and assignments on the net, analyse the feedback, and write a better one for the final class essay. It is very good activity and the process or learning and teaching will run smoothly without any barriers of place and time. Beside advantages of social networking in education, there are also some advantages of social networking in language learning. Many researchers has conducted research on this matter and many of them conclude that social networking can be subjected to crime especially to the youth or students.

Because social networking offers the users to communicate each other without any boundaries that will be used by the bad people to to do crime to the others. By using social networking people who is next to us because we are too busy with online internet or people who are far away becomes near because of this social networking. It means that, though the students are sitting close to each other but they are busy with their gadgets so, it is lack of social interactivity in the real life. Networking websites can make people or especially students become very addictive. People spend more and more time at computer with makes them isolated from real life. They are wasting time at checking purposeless posts and informations. Thinking just about virtual world they can’t focus on anything and have problems at school or work. In the term of language proficiency, many young people write broken english words which are not found in English dictionary. Some of the use abbreviation which sometime confusing to the others. Such as they use ‘text language’ in their normal day to day vocal, saying things like ‘lol’ (laugh out loud). Because mostly social networking using written context message, so sometimes students face many problem when they are told to speak correct and professional English. Some are not able to form correct sentences on the spot and after making a mistake, the whole flow of the sentence and conversation breaks apart.

Social networking sites, “can be a potential risk for teachers as some applications allows users to communicate” and “the content can lead to discrediting or slanderous messages”. It can be happens to the teacher when they are not so aware with the threat of social networking to them. The teacher need to concern and sometimes the teacher are not so well understand about the use of social media and its advantages in the teaching and learning. And the teacher should be good in selecting the content materials if not the learning process will be just useless. Social networking can also be subjected to an on line bullying. It may happens when a students make or post bad things, and he does not realize that it can be used by other friends at school to embarrasse him. Of course it will create bullying among the students.  There are some advantages and disadvantages of using social networking in education including in English language learning. It can encourage students to engage with each other and to express and share their creativity and can create a better English communicative environment for students. Oh the other hand, social networking is lack of humanitarian aspects and create confusing language because using slank words or abbreviation which are not found in English dictionary.

Advantages And Disadvantages Of Social Networking. (2016, Apr 08). Retrieved from https://studymoose.com/advantages-and-disadvantages-of-social-networking-2-essay 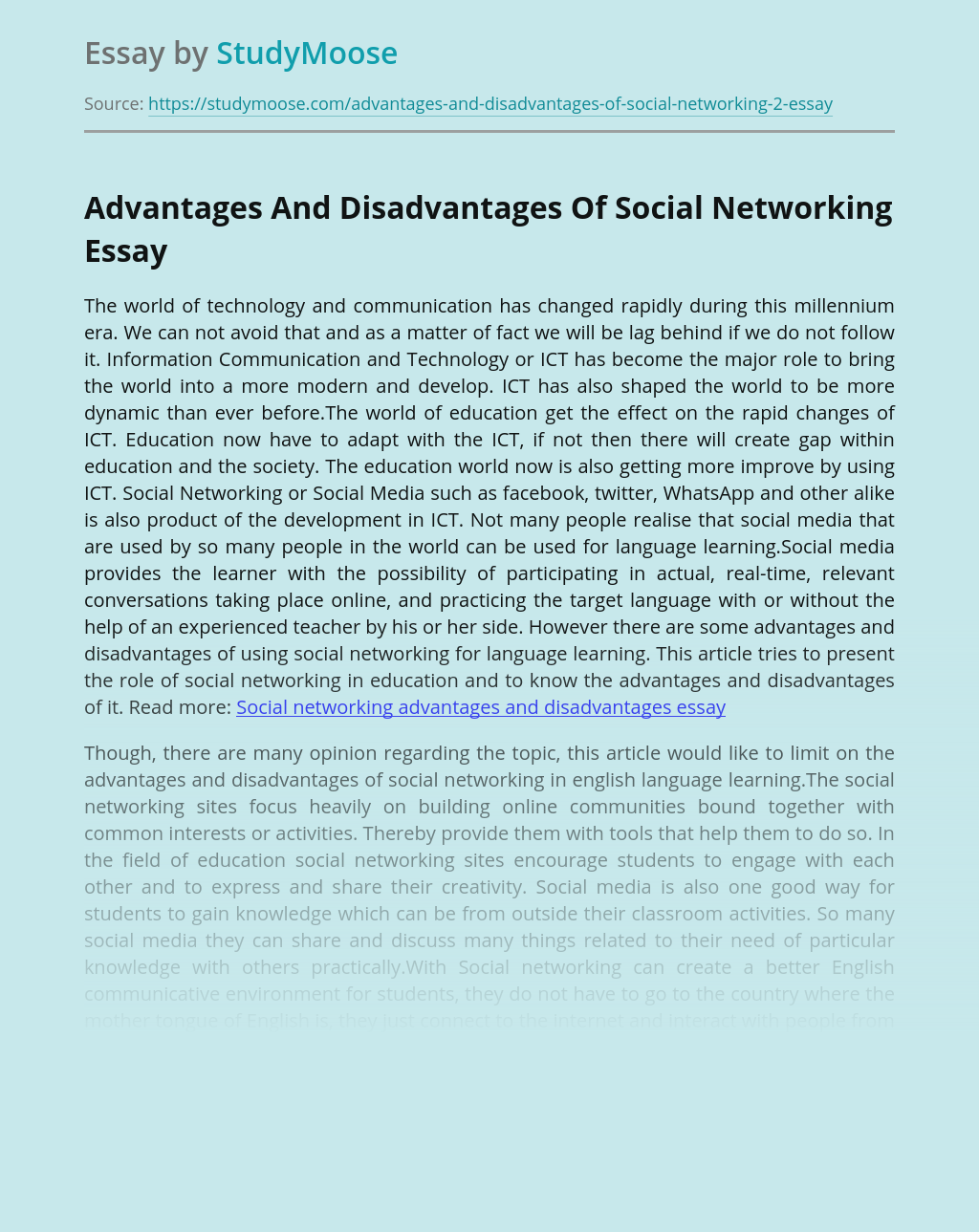 Turn in your highest-quality paper
Get a qualified writer to help you with
“ Advantages And Disadvantages Of Social Networking ”
Get high-quality paper
Helping students since 2015
Stay Safe, Stay Original