Rogerian Argument: Does Facebook, Twitter and other social networking websites do more harm than good? Twitter and Facebook are only two of the online connections people use today to stay in contact with friends and family. The internet is a place to interact with new people and a way to be exposed to strangers. The partial anonymity available online can be used as a mask for sexual offenders and psychos; they can appear to be ordinary normal people, and you have no way of really knowing what is the truth and what is a lie.

Don't use plagiarized sources. Get your custom essay on
“ Rogerian Argument ”
Get custom paper
NEW! smart matching with writer

Too much personal information is at risk on these social networking sites. You can’t really build a relationship with an online friend because on the internet you can become whoever you want to be. Many people tend to agree that the socializing network can be either harmful or helpful. Many like the respect they receive from their online “pals.” It builds some peoples’ self-esteem and confidence.

Rather than speaking verbally with a person, you could easily message them. Some people like to build fake relationships rather than real ones because real relationships are difficult for those who “lack communication skills.” Some people will agree the social networking sites have a beneficial effect on our way of life. They believe that social networks increase our social interaction and give us more ways to make social connections.

As long as the individual remembers and accepts that a decrease in privacy comes with that increased social interaction, then it is a benefit.

It stops being a benefit when people forget about the decrease in privacy and do things through social networking sites that they may not want everyone to see. More importantly, social networking has increased the opportunities for businesses. The increasing trend for everybody to be on a social network has been recognized by several businesses, which then adopt these social media websites to promote and advertise their products. With social marketing being cost effective and brands having huge audiences, this proves to be a prolific method to advertise.

Social media can be just as harmful as it is helpful in the wrong hands. There have been many people who use these sites to cyber bully people. Take for example the Steubenville rape case. The 16 year old victim is constantly being bullied by her peers. They send her tweets and Facebook post saying that they are going to cause bodily harm to her. One girl, the cousin of one of the charged suspects tweeted to the girl “you ripped my family apart, you made my cousin cry, so when I see you b***h it’s gone be a homicide”. The effects of social networks can really be used for good or bad. Social media is constantly in our faces thanks to the advancements in technology.

Many fail to realize how harmful social networks can be. Social networking sites are nothing more than tools for narcissists. These sites are increasing in popularity but are really destroying natural and healthy interpersonal relationships and foster ignorance of the human condition. Social networks are just a horrid distraction for everyone. Why do we need a mediator for relationships we currently have? Why do we always use the excuse for these sites: It helps me stay more connected to people? How? By poking them on Facebook, or simply retweeting their tweet. The introduction of social networking sites has created a massive shift in the defining of the term ‘socialite’. From my personal experience, social networks can be very harmful. People feel as though they can tweet everything that comes to their mind, even if it may be seriously inappropriate. People fail to realize that everything you post on the Internet will stay with you. Just because you delete something it doesn’t mean that it is permanently deleted from the Internet. Many should watch what they post on the Internet. Social networking sites encourage people to be more public about their personal lives. Because intimate details of our lives can be posted so easily, users are prone to bypass the filters they might normally employ when talking about their private lives. What’s more, the things they post remain available indefinitely. While at one moment a photo of friends doing shots at a party may seem harmless, the image may appear less attractive in the context of an employer doing a background check. While most sites allow their users to control who sees the things they’ve posted, such limitations are often forgotten, can be difficult to control or don’t work as well as advertised. Anything people say or do online will leave a trace.

Chances are, years from now, a potential employer or college will be able to do a search you and find your profile page. social networking sites affect our health tremendously. Obviously, sitting in front of a computer requires zero physical activity. If users are on these sites throughout the entire day one can determine that these individuals are eating while also being on these sites. All human beings get hungry. Clearly, this will affect our weight greatly. Statistics show that sitting in front of the computer all day causes poor posture, eye strain, poor circulation, and causes individuals to eat way too much, severely affecting one’s health. Since our new computerized interaction involves zero face to face interaction, there is no motivation for individuals to leave the house or to go exercise, creating health risks we can’t afford to ignore. Upon examining the many effects of social networking, one can clearly see how potentially dangerous these sites might become.

Being a college student, I know that almost every fellow student engages in some type of social networking site—whether it is Facebook, Twitter, etc. Personally, I love Twitter and find it very beneficial while trying to stay in touch with old friends from high school; however, I am aware of the negative aspects of social networking sites and keep that in mind while using them. In high school at Dr. Henry A. Wise Jr., High School, I had difficulties with my ex best friends. We had a disagreement about a lot of things. After not talking to them for two weeks, I found my life was much more at peace without them. A few days later, my ex best friends began tweeting about me and harassing me through Twitter. Taking the appropriate actions, I took the messages to my parents and the following consequences were taken from there. Would this have happened if Twitter was not available for quick, seemingly consequence-free interaction? Probably not! It is clear, then, that these social networking sites can be very beneficial for keeping up with family members, friends, etc.; however, one must be aware of the possible dangerous scenarios that can occur and know how to handle these situations. Users of social networking sites should take advantage of the option of making their profiles private—what is it hurting? Think how much trouble you can save yourself with a few clicks of a mouse! I also encourage users to use these sites for the advantageous reasons but to also not let the sites hold you back. Go out in the real world, meet people, and take the time to get to know someone in person rather than through computerized interaction. All in all, users of these sites need to be aware of the obvious and not so obvious effects of these sites and use them with their utmost caution. 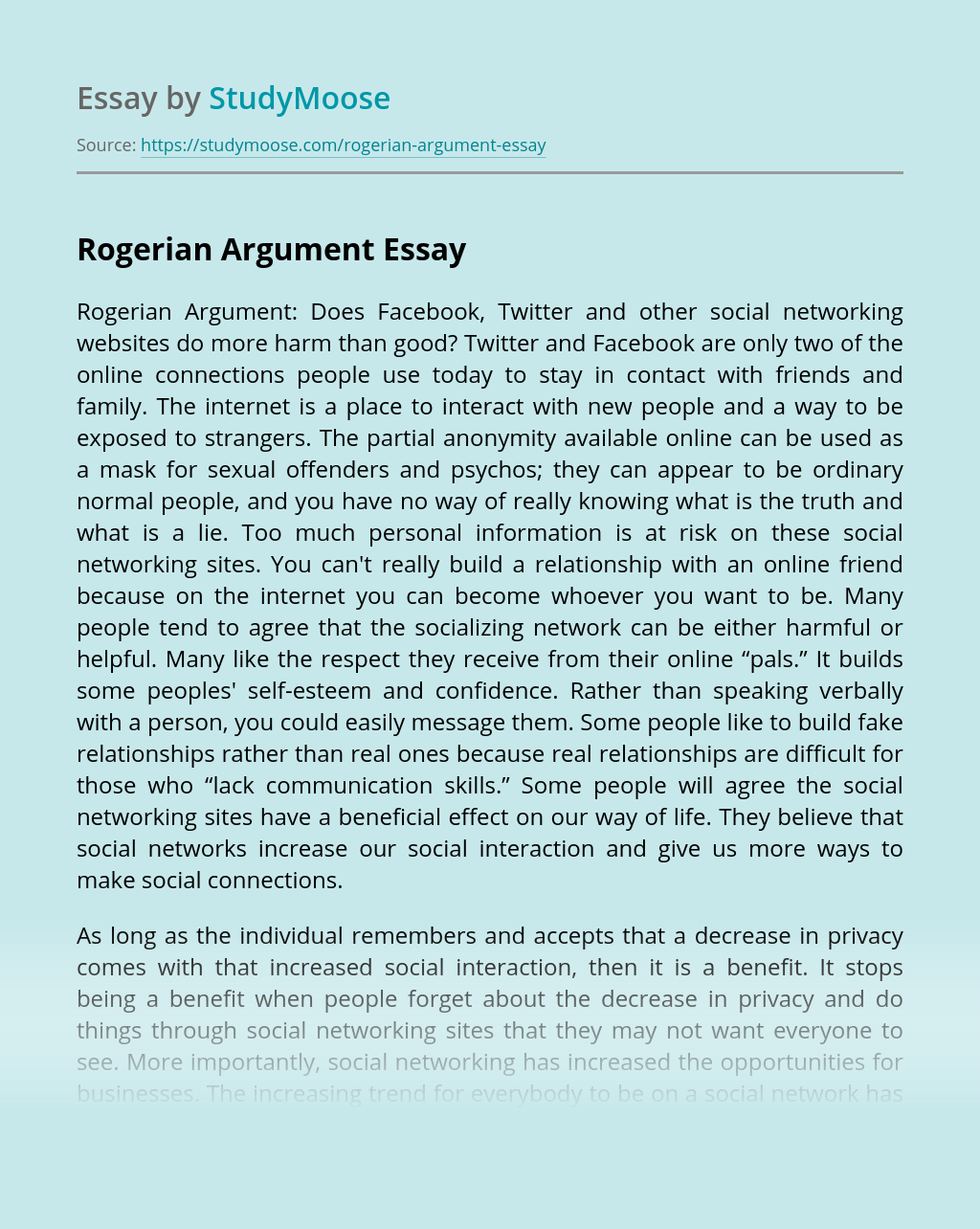