How to get young people vote?

The youth form the biggest number in the country’s population and are the large percentage of voters (about 60%). All decisions and services made by the government and the parliament affect largely the youth. The youth are not satisfied by the current political leaders, government officials and the members of parliament because they are not making sound decisions with regard to the wellbeing of the country. The politicians are selfish and greedy (Ed Gillespie, October 13, 2004). These issues have brought the need to elect elegant people who can best address issues of the youth and the country at large.

Don't use plagiarized sources. Get your custom essay on
“ How to get young people vote? ”
Get custom paper
NEW! smart matching with writer

The country is facing many issues such as HIV/Aids, unemployment, constitution review and education (to eliminate illiteracy levels among the youth and the adults). The current government is not addressing these issues and many others fully and therefore there is a need to elect the most appropriate people who can address the country’s problems correctly. The decision to elect vests in the voters card and therefore the youth need to be actively involved in the politics of the country so that they can make good choices during elections.

This requires the youth to be encouraged to be actively involved in politics so that they help form a government for the people, by the people, and of the people. The youths should be taught to be active in politics at an early age of 18 years at which they can obtain national ID’s and the voters cards. Many youths are not actively involved in politics meaning many votes go to waste, helping incompetent, selfish, and greedy politicians to have an easy way to the parliament and hence the government.

Therefore great emphasis should be on the active involvement of youth in the politics (Ed Gillespie, October 13, 2004).

The government should be on the forefront in encouraging youth involvement in politics. The government should allow the youth to form parties, fund the parties’ aspirants in their campaigns, discourage violence incited by greedy politicians and support youth participation in all activities geared towards peaceful elections and national unity. Youth violence has been associated to greedy politicians who intend to do anything to get to parliament even at the expense of those who vote them in, and this should be discouraged. Political parties are also a big player in youth politics.

They should encourage and support those young people aspiring to fill top political seats countrywide (such as civic and parliamentary seats). The parties should discourage tribe oriented politics that tend to contribute a lot to violence prior to and even during elections. Youth groups associated to certain politicians should be discouraged since the youths in each group only consider their wellbeing forgetting the wellbeing of their communities and of the country as a whole. Politicians should bear in mind that powers vested in them by the voters should enable them to unite the people and help in solving common problems.

Campaigns done by the politicians and youth should address country’s unity, youth empowerment and solutions to most pressing issues. The Electoral Commission of Kenya (ECK) is the body that is trusted with the power to co-ordinate, promote, and drive peaceful campaigns and elections. So, ECK should encourage the youths’ active participation in politics by enabling and educating the youth to register as voters, support and enable registration of youth leaders and parties, use its powers to control and cop-ordinate campaigns and finally elections, and educate the youth on the importance of voting.

The media should have advertisements that encourage the youth to register as voters, withdraw from violent politics, be responsible and accountable, know their rights as eligible voters of the country, be involved in peaceful and non- tribal campaign activities and ensure they elect the most suited candidates whose vision is for the community and country’s wellbeing and not self centered. Activities that encourage youth participation in politics The youths should form sports academies where all youth can meet to play and at the same time exchange different ideas and visions for the country.

Such sports activities like football will also promote unity and peace without bias to tribe. The ideas will involve the youth in active political participation in trying to provide solution to the country’s problems. Music gatherings or rallies will also bring youth together. In the meetings the youth are entertained, learn about different cultures, promote unity, get different ideas and perspectives about promoting country’s wellbeing and get educated on peaceful campaigns and elections.

Political parties should have slogans that are shouted by the youth and help encourage political involvement, peaceful campaigns and elections. The media through televisions are using intensive campaigns such as ‘rock the vote’ that encourage the youth and all voters at large to make sound decisions in choosing whom to vote in. This will increase the number of youth voter turnout so that the youth can vote for most appropriate people. High learning student bodies involve a lot of politics by those vying and those campaigning for them.

From here, the students are encouraged to participate in the country’s politics and try to vie for top civic and parliamentary seats. Conclusion The youth are the majority in both total population and voters percentage and they are affected by most decisions made by the government and parliament. Therefore, they ought to actively participate in the politics through encouragement by the government, political parties, ECK and the media. Ed Gillespie (October 13, 2004). Republican national Committee letter to rock the vote. 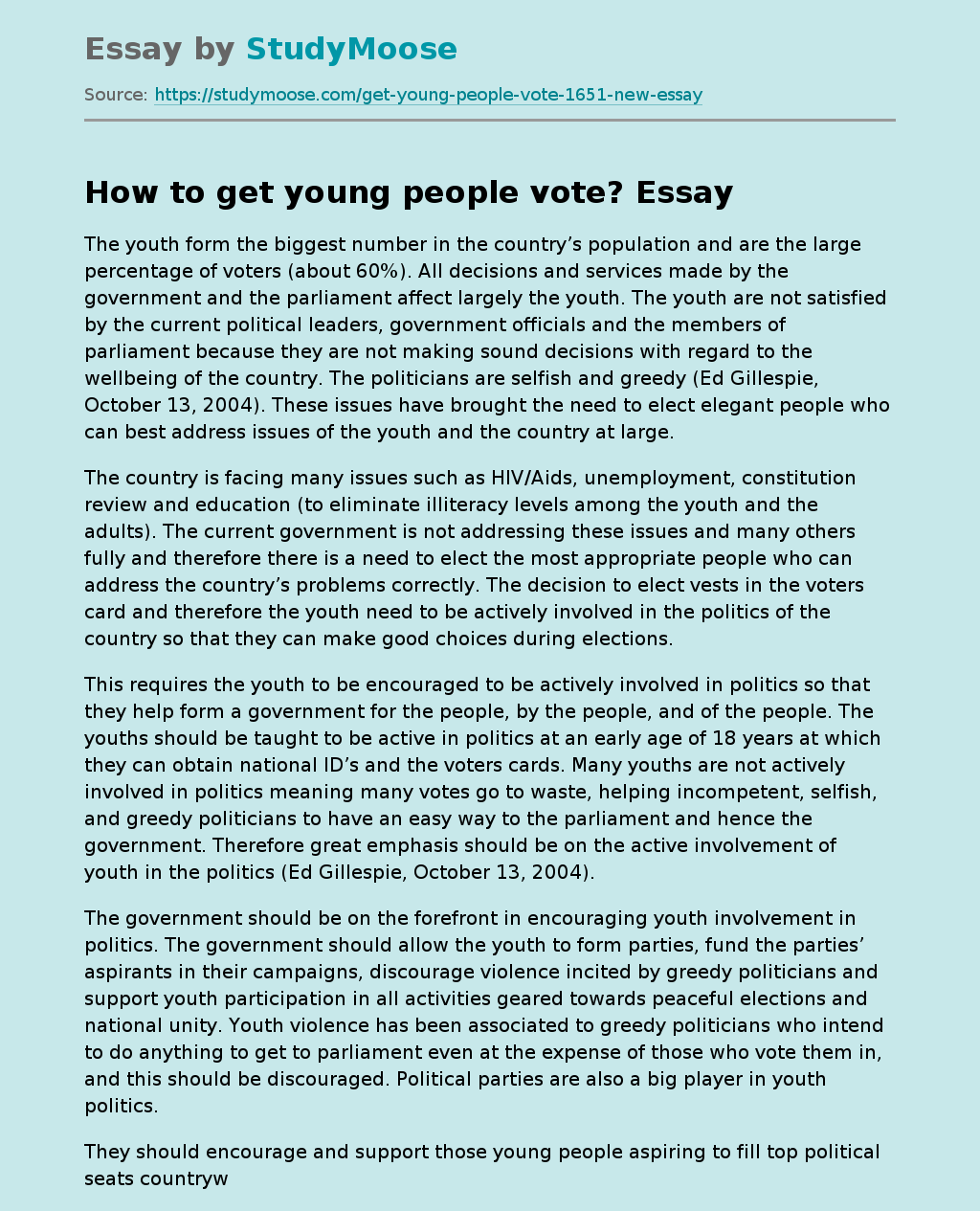