Our Kids Have the Right to Vote

People have died to establish this right to be heard, to have a say in social, political and economic matters and to leave the best administration for future generations. People who do not vote but complain about how the government is run are hypocrites. You have to earn your right to complain. Complaining about something that you personally did not even participate is effortless. The opinion you have becomes invalid to everyone who did their deed to go and vote and it is an insult to them.

Don't use plagiarized sources. Get your custom essay on
“ Our Kids Have the Right to Vote ”
Get custom paper
NEW! smart matching with writer

The right to vote is not guaranteed to everyone, so take the advantage given to the citizens of America which should be held as a great responsibility for those before you who couldn’t. In America, there were men and women who fought in all types of different ways for the right to vote. Voting isn’t just the process of choosing who you want to be in office it is something greater. Voting represents the community and gives you a direct chance to impact your community in the eyes that others may not be able to see.

Proficient in: Power Of Youth

It allows the spread of diversity from not one group or area in any society but many. Youth voting specifically has been calculated to have an account for over half of the population and those are only the ages of 18 through 24.

​As of today, with midterms elections just passing the millennial age has started its impact of voting. New claims have been made that the youth will become the biggest group of people to decide future elections.

In my opinion, the youth definitely have the potential to make an impact on how future polls will be decided. Even though the youth has enough of the number of people to vote, it is that will the youth go out to exercise that right and vote. Poll results will continue to be the same if they do not go out and vote. My friends and I have convinced each other that registering and preparing on who to vote for is of great importance but in order to see true opinions of societies, interest groups and the public everyone must vote. Some vote for the purpose of changing the policies we have or change the presence in legislation from Republican to Democrat but personally the true purpose is to have a voice in government. The term democratic obligation explains the efforts of the people who fought for there right of the Voting Rights Act of 1965. The Voting Rights Act of 1965 prohibits all discrimination against people in voting.

During this time discrimination against minorities was used to prohibit certain races from voting. When registered to vote certain races were given a test that were difficult for even scholars to pass. The people before us recognized the importance of voting and the need for it, so as a nation we need to stride to get the fire and passion back. From research and conversations, it is known that the youth were the most affected in the late 2000’s. In the 2000’s the high amount of lost jobs and debt forgiveness affect the youth the most. The situation won’t be changed by sitting idle while others make major political decisions. Youth voters who want to inspire change need to show their support for the candidates whom they feel best to represent their needs. No one else is going to vote in the interest of young people except young people. In 2008, during the presidential election, young voters made its first impact on society and government. This election put the first African American president in office. Whether people back in 2008 agreed or disagreed during that election, history was made. While personally, I believe that was our first glimpse of what could happen if people could go out to vote, especially the youth.

In America, the youth have the power to make history for the better through our right to vote. The options for ways to vote can come in many ways and if you, the potential voter, don’t know anything about this process then you should ask a close friend or mentor. Even before you hear about elections get involved with a group in your community who is trying to make a change. It is best to learn as much as you can about politics and as a citizen of this nation, it is your civic duty to exercies your right to vote. The process should come across fun and having great pride for your country because you are doing something that others before you could not do. Some may say, “my vote will not make a difference”. Elections have known to end out in very close results. For example, Democrat Marcus Morton won his race to become governor of Massachusets by just one vote. A single vote does make a difference, not for only the many voters who put their opinion into the ballot but you as well because in ways you may not be able to see at the moment will come into perspective later on. We can show the nation that we are worth the investment and change the habit of thought that we are just of individuals known as the “millennials”. Yes, that may be the characteristic of the year we were born in but it does not define us and distinguish how we all think. I believe if we exercise our right to vote as the youth of this country and the up and coming age to make unbelievable things reachable we can change that perspective and give the world the new jolt it needs. We, the youth, have all the cards in our hands now we just need to use them.

Our Kids Have the Right to Vote. (2021, Dec 10). Retrieved from https://studymoose.com/our-kids-have-the-right-to-vote-essay 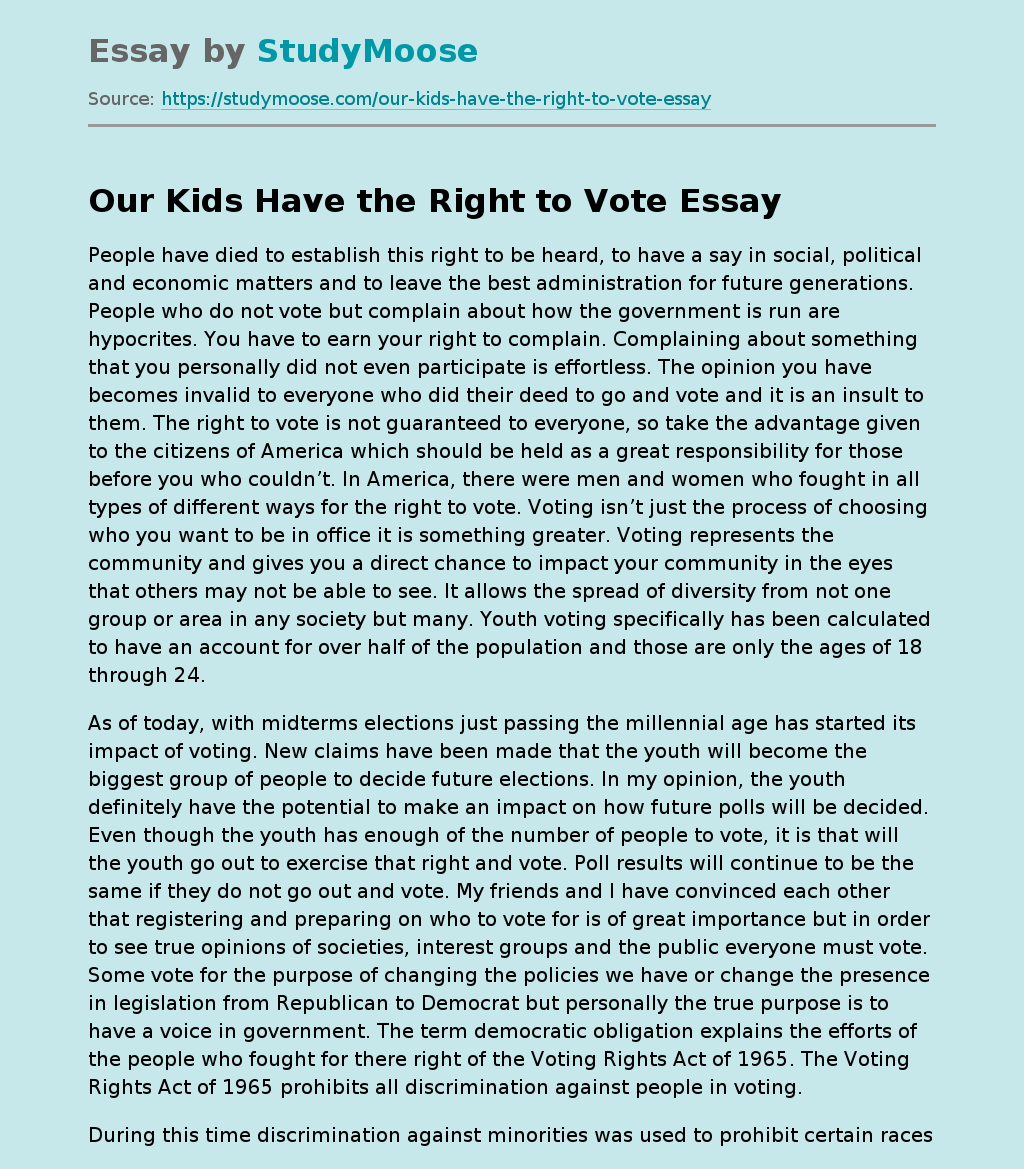