Are My Kids Watching Too Much TV?

In a society, where most individuals have at least two television sets in their homes and are fixated on sitting in front of the TV, it is difficult to disregard the idea of the unsafe impacts of watching a lot of TV. Television has many to offer, and without a doubt is an excellent innovation; however, when it comes to relying on it, either to be informed or entertained, it can influence people negatively. Winn’s claims in her essay television addiction, 1977, that television addiction is considered as harmful as drugs and alcohol.

Don't use plagiarized sources. Get your custom essay on
“ Are My Kids Watching Too Much TV? ”
Get custom paper
NEW! smart matching with writer

The first reason why television should be restricted is that the content of most TV programs lack any educational value but make us live in an unrealistic world.

Nowadays, we can see several movies and programs that show scenes of violence, war and drugs which has influenced audiences negatively. In many instances, viewers might feel obsessed towards a certain character they might admire. In addition, excessive exposure to violence on television may affect the brain and may cause a person to show violent behavior in their environment. In certain extreme cases, children might dissociate themselves from reality and believe that they are living the same fantasies that they view on television. An instant of this is the story of a Russian teen that ”leaped from his apartment building committed suicide just like his favorite cartoon character on television’’ (mail online, 2012).

This is one of the many extreme examples of how television can cause people to dissociate themselves from reality.

Instead of effectively communicating with our direct surroundings, television has become a tool to divert our minds from active living, acting as a substitute for a healthy lifestyle. As opposed to going out to play football, for example, we are so fixated in viewing football games on television and appreciating our most loved football players as if they are legends. Instead of going to our kitchen and cooking a solid dish, we are choosing to sit on the couch viewing uncommon cooking shows where individuals are relishing various sorts of flavorful foods, while we fill our bodies with processed and unhealthy foods. As opposed to going out to meet and interact with our friends, we decide to encase ourselves inside four walls and be isolated from society in order to watch films.

Besides that, another negative effect of television addiction is that students tend to spend too much time on TV and forget their responsibilities. Students will not be successful in their school or their life when T.V time has filled nearly all of their time. According to American Academy of Child and Adolescent Psychiatry study that ”Children who watch a lot of televisions are likely to have lower grades in school”. (2011, p. 3615). Television uses up a significant part of our time during the day, making it difficult for us to concentrate on other activities while a TV on in the background. ”Spending time watching TV can take time away from healthy activities” (Gavin, 2013). Instead of spending excessive time watching television we can use it to practice useful activities like doing physical exercise, reading, and interacting with friends and family which are all activities that are crucial for a healthy lifestyle.

Another disadvantage of television addiction is its link to obesity. There is a relationship between watching T.V and obesity which comes as a result of poor physical exercises and therefore the individual is not in a position to reduce cholesterol in the body. This problem is worsened because children accept the negative messages portrayed in television advertisements made by unhealthy food and drink manufacturers. ” Men watch television more than three hours a day are twice as liable to be large than men who look for 60 minutes” (Tucker, 1989). In fact, people will eat anything in front of them while watching exciting shows without realizing the volume of the food they are eating. There is a vicious cycle between excessive television viewing and excessive intake of unhealthy foods. Satcher and Watkins, the Undersecretary of Agriculture for nutrition, food and consumer services in the US said that ” TV increases obesity, stifles creativity, and shortens attention spans among young people” (1999). The more people are watching television the more obese they will gain. As Dr. Klesges in a psychologist at Memphis State University, believes that ”Watching TV just 30 minute lowered Body metabolism rates 14 percent more than resting rate or lay on your bed”(1992, p.338). In other word, If you laying in bed without the television on and staring off into space burns higher calories than watching Television does, since your mind is going to be more active without TV on. Sitting in front of the TV shuts you down; it decreases brain activity with decreased movement. All this adds up to reducing calories burned and extra pounds around the midsection. Obesity is one of the negative effects produced while an individual watch TV too much.

Another negative aspect of television is that watching too much TV leads to a decreased ability for self-learning in children hindering innovation and creativity. The majority of television programs, including those entertaining children such as animation, are not educational in the broad sense. These programs do not develop the ability of self-education in children. This is also seen in so-called educational programs because these programs often offer the solutions to problems for their child viewers leading to passive learning. Such passive learning hinders a child’s ability to actively seek and learn information and weakens the child’s potential to build new knowledge and skills. In addition, the perception of what is seen to be a solution in one setting may not be the solution on the other hence, no innovation to get new solutions for different problems.

While some people believe that there are examples where television can be beneficial to children, the disadvantages of television addiction outweigh the benefits. Indeed TV is a bad influence towards teens, adults and children, in particular. TV makes kids behave in an aggressive and violence way. As stated in 1982 by the National Institute of Mental Health, there is a consensus among members of the research community that aggressive images on TV do lead to forceful conduct by children and teens who watch such violent programs. Moreover, TV programs may encourage undesirable conduct, such as the use of drugs and alcohol.

In conclusion, watching television has several negative outcomes and has to be limited. These negative results hinder the evolution of a person’s thought process, lead to a harmful lifestyle and are time-wasting. Television should not be the way children entertain themselves. Instead, children should be encouraged to exercise and engage in activities both indoors and outdoors. Instead of television, people can choose to participate in activities such as reading, sports, hobbies, and household chores/activities. More importantly, parents should set a good example for children to spend their free time reading, exercising, and interacting with peers. All these measures should be taken to minimize the influence of television in our daily lives. Consequently, I believe that watching television produces more negative effects than positive effects and therefore should be discouraged as much as possible.

Campaign for America’s Kids (2011). Children and TV Violence (13). the American Academy of Child and Adolescent Psychiatry.

Tucker, L. (2013, May 28). The Human Body: A Gift and a esponsibility. Speeches. Retrieved May 9, 2014, from http://speeches.byu.edu/?act=viewitem&id=2123Webb, S. (2012, November 1). Russian teen leaps from apartment block after seeing his favorite Japanese cartoon character die on television . Mail Online.

Are My Kids Watching Too Much TV?. (2015, Nov 24). Retrieved from https://studymoose.com/television-addiction-essay 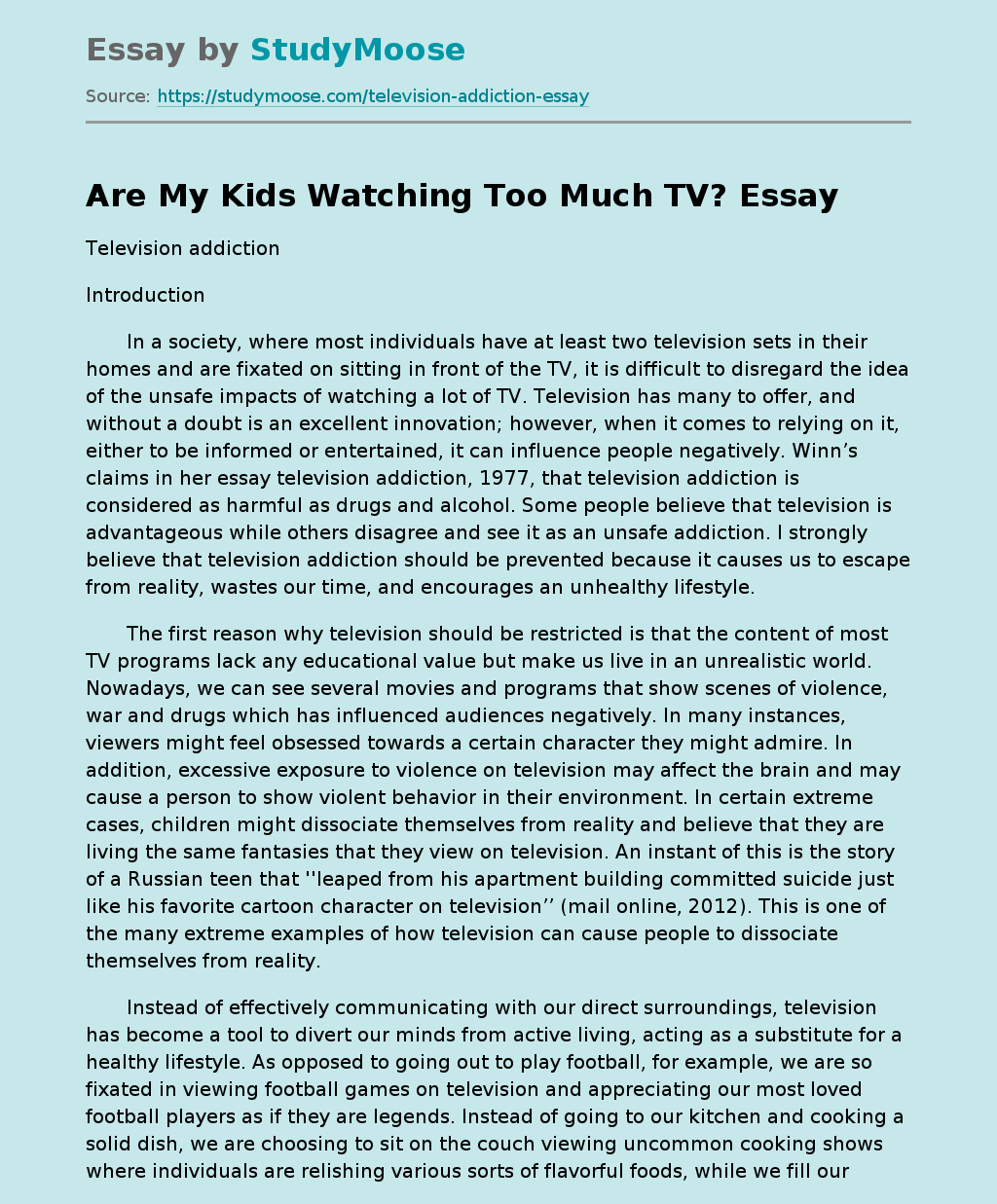