How Do People Get Along with Others?

“Social skills are the ultimate determining factor in the child’s future success, happiness and acceptance.”- Richard Lavoie wrote in his book, it’s So Much Work to Be Your Friend (Lavoie, 2005). Interpersonal relationships is an important aspect of life and by socializing with others, this goal will be met. In this paper, the importance of getting along with others, obstacles to relationship building and ways to build good interpersonal relationships will be discussed.

Firstly, building interpersonal relationships is important in that it is the avenue for fun and entertainment, it is used to build and maintain friendships and it is the key to healthy and fruitful life.

Don't use plagiarized sources. Get your custom essay on
“ How Do People Get Along with Others? ”
Get custom paper
NEW! smart matching with writer

Secondly, being afraid of rejection, catering to others and lack of understanding in oneself are obstacles that one may face when trying to socialize and build relationships. Lastly, changing attitude and behaviors, practicing communication skills and starting in a familiar environment are general, but effective ways in building interpersonal relationships.

Introduction It is often assumed that people with strong social skills loves meeting new people and hanging out with friends all the time.

The reality is, even a shy is going to have to communicate with others at some time or another. The truth is, everyone is social, but it is expressed at different levels and in different ways. Having strong social skills doesn’t mean one will succeed in life for sure, but what it does mean is that one is very capable of creating networks and communicating with others.

Social skills are an avenue for fun and entertainment. It is developed through daily interactions. Instead of watching television or youtube at home, go out and hang out with friends. Interact with other people! Developing one’s social skills should be something one finds enjoyable and fun (The importance, 2010). Building and maintaining friendships

Social skills are the support system of building and maintaining friendships. Philosopher Aristotle once said, “In poverty and other misfortunes in life, true friends are a sure refuge. They keep the young out of mischief; they comfort and aid in their weakness, and they incite those in the prime of life to noble deeds” (Collingwood, 2006). Friendships are a vital aspect of our lives- but how do we develop and main friendships? The answer lies in social skills. We are constantly influenced by the people around us, in both negative and positive ways. True friends however, lead us away from the bad and acts as a guide to in our weaknesses (The importance, 2010). Key to living a healthy and fruitful life

Social skills are the key to a healthy and fruitful life (Collingwood, 2006). People with support from friends and family members have a greater sense of self-esteem because they know that they are loved and cared for (Thompson, Bundy & Broncheau, 1995). They will also adopt a healthier lifestyle due to the influence of others around them. A strong social network of people will also reduce stress and other mental illnesses. A research was done and published in 1984 in the January-February issue of Psychosomatic Medicine. It was found that “patients who scored above the median level on loneliness tests had significantly fewer active natural killer cells-cells that attack germs” (Life of the Party, 2005). Obstacles to relationship building

Life is like a hurdle race. Everyone starts around the same but not everyone will finish. Whatever one faces in life, there is bound to be stumbling blocks and hurdles that may seem impossible to jump through. Some people will be able to jump over a certain hurdle, while others will stumble through it. For some people, social skills can be one obstacle that they have yet to overcome. Bring afraid of rejection

Adolescents may be afraid that other may not accept them, and that they might be criticized or rejected because of their unique features or actions. This might be owing to their physical and psychological development. As a result, they will keep their thoughts to themselves, which prevents others from understanding them. Catering to other

In order to meet a certain standard or expectations from certain groups, one may compromise their own interests or moral principles (Harter, 1999, p. 677). One classic example is if our friends use coarse language, even though we consider them rude, we may hide our disapproval and copy them in order to gain acceptance. Building a relationship by pleasing others will only lead to a superficial interpersonal relationship. The lack of candid communication will make it hard to build a strong relationship in the long run (Harter, 1999). Lack of understanding in oneself

Adults often describe teenagers as lazy, ignorant and inconsistent. This is in fact quite true. Teenagers don’t often understand themselves, let alone accept and appreciate themselves. Guys are constantly lifting weights whereas girls are putting on more and more makeup each day. Some indulge themselves with electronic games and comics and become even more self-absorbed. This distances them from people around them, resulting in a vicious cycle (Thompson, 1998). By understanding and accepting as who one is individually, one can voice their need or dissatisfaction appropriately, clearly communicate well and build good interpersonal relationships. Ways to build good interpersonal relationships

There are many ways to build good interpersonal relationships. Below, are just three main points of thousands of ways they will work for different people. The best way to find methods that best suites oneself is to try many and see which one is the most comfortable and convenient for one (Yaughn, 1999). Generally however, changing one’s attitude and behaviors, practicing and improving on interpersonal communication and starting in a familiar environment will be the major steps in developing good interpersonal relationships. Changing attitude and behaviors

“Character matters. Good character is central to individual and societal well-being. Good character is not simply the absence of deficits, problems, and pathology, but rather a well-developed family of positive traits (Park, 2009).” First, learning to appreciate the uniqueness of ourselves and others is crucial in helping one express themselves, understand other people, and communicate and establish relationships with them (Croissant, 1996). Second, one needs to be respectful of others. “Respect means taking account other people’s situations and encouraging them to fulfill their potential rather than forcing them to change (Merrell, Gimpel, 1998).” Lastly, understand yourself. “Take part in various activities and build relationships with different people (Croissant, 1996).” This way, one will learn to know themselves better by knowing their interests, disinterests, areas they are skilled at, shortcomings etc. In the same way, understanding and facing up to one’s emotion is important. Try to solve them in different ways.

How Do People Get Along with Others?. (2017, Feb 01). Retrieved from https://studymoose.com/how-do-people-get-along-with-others-essay 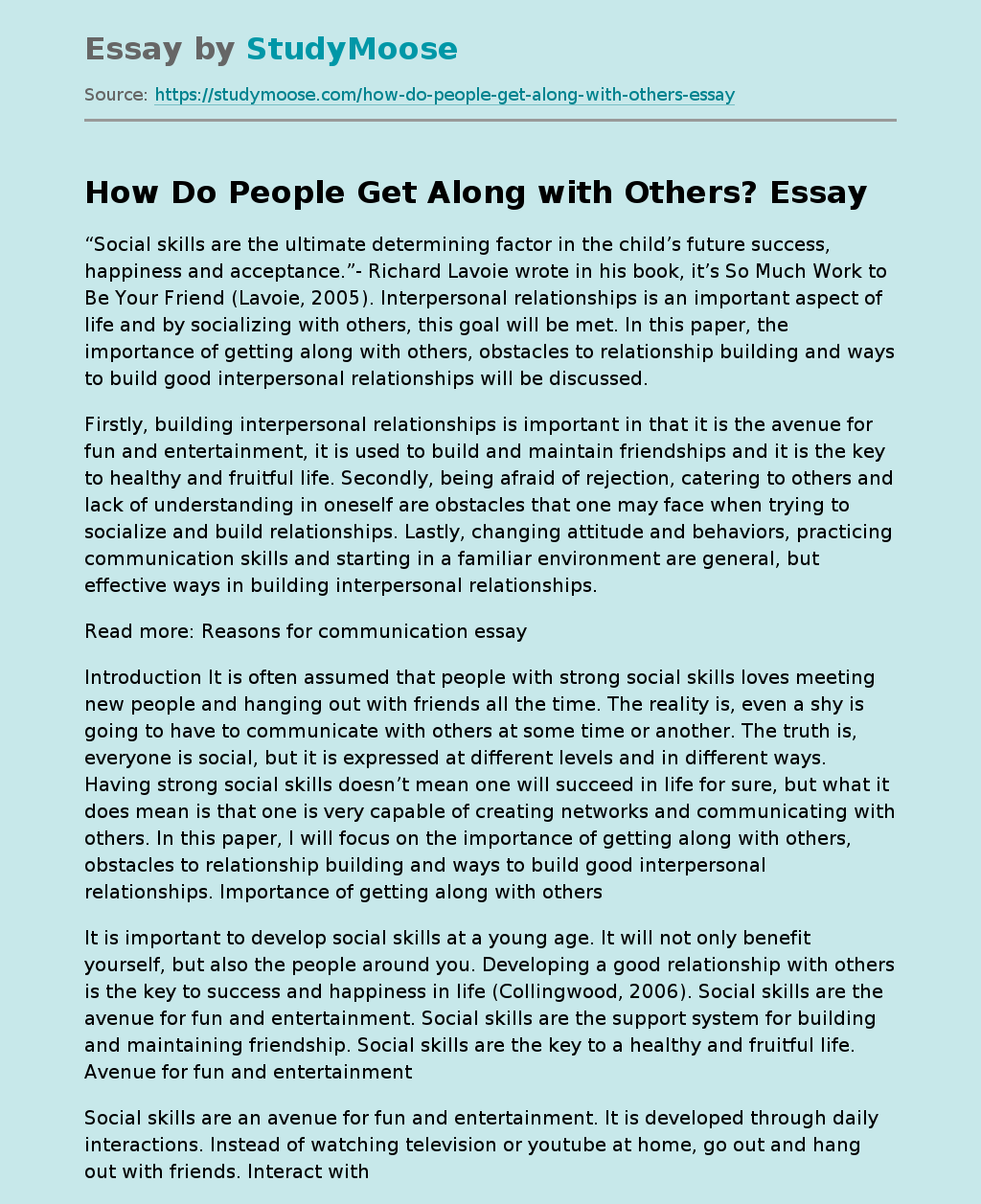