George Orwell’s satire, ‘1984’ draws inspiration from post WW2 ideologies such as Stalin’s red flag which swept across all of Europe giving rise to the terrifying spectre of Britain’s democratic socialism being eroded by a wave of communism as well as the aftermath of Francisco Franco, Mussolini and Hitler’s fascist movements resulting in a catastrophic Spanish Civil War. 1984 conflicts with the fundamental human need to understand purpose and generate an individual identity while dealing with the peril of one’s existence living amongst a world of repressive collectivism.

Don't use plagiarized sources. Get your custom essay on
“ George Orwell’s Satire in “1984” ”
Get custom paper
NEW! smart matching with writer

The impenetrable paradox is comprehensively explored throughout Orwell’s depiction of the complex human experience as the forceful isolation assigned on individuals by the Party is faced with the need for human connection, igniting both empathy and terror in readers who seek to find glimpses of hope within a hopeless society.

The human experience of the loss of personal freedom and the overt use of power is established in a world where the importance of humanity is stressed, through the exploitation of humanity as a collective.

Acting as a cautionary tale, 1984 explores the unavoidable result when the collective obtain power, examining the associated human experiences. Influenced by his context, Orwell represents WWII totalitarian regimes such as Nazism and Fascism through the over-ruling party, through the continuous methods of surveillance through microphones, telescreens and propaganda, developing a sense of paranoia, brainwashing Oceania to that ‘BIG BROTHER IS WATCHING YOU. By mirroring WWII, Orwell explores the desolate living conditions of the societal collective under the repressive dehumanisation of the Party within Oceania, as the wellbeing of the people is surrendered to the maintenance of the Party.

Represented through Winston’s persistent metaphorical ‘varicose ulcer’, Winston attempts to ‘escape the vile wind’ but ‘not quickly enough to prevent a swirl of gritty dust entering along with him’. This inescapable oppression provided the path to the corruption of the collective, as they seek to destroy all opposing physical and mental barriers, eliminating the utopian illusion. Likewise, through the mass media of the ‘‘Two Minute Hate’ and ironic slogans such as ‘War is Peace. Freedom is Slavery. Ignorance is Strength.’, the party utilises all forms of human life to force compliance which weakens the strength and independence of the public mind, forcing them to live in a continues state of propaganda induced terror, affirming the aspects of manipulation inflicted upon them. The irony of the ‘Ministry of Truth’ re-iterates the corruption of the collective as the Party’s use of manipulation represents the oppressive society and the corruption inflicted, causes the audience to reflect on the political corruption in their current world and the relating human experience.

The subversion of human relationships and trust serves as an important form and example of a human experience which consequently represents human qualities and emotions associated with a need for human connection. In the novel, Winston and Julia’s sexual relationship sparks emotions that ultimately began with love, however, transfigures to become a rebellious act. Orwell employs Stalin’s ideologies of asexuality and the annihilation of emotions in order to maintain political orthodoxy evident through the verbal irony “No emotion was pure, because everything was mixed up with fear and hatred….it was a political act” emphasising the suppression of intimacy, highlighting how sex in the world of the novel is an act of rebellion against the Party as the sexual intention is replaced with a sense of duty to the party. The party’s sexual puritanism is brought upon the idea that “the sex instincts develops a world of its own” and therefore must be eradicated and hence the Party’s elimination of ‘pure love’ and connection amongst individuals, plays into humanities deepest fear of isolation, constraining the need for love onto the collective. The Party represses natural human sexual instincts by likening sex to “a slightly disgusting minor operation, like having an enema”. And restricting love “except the love of big brother” and hence limits the intentions of love and is characteristic to the current debates concerning same-sex marriages in contemporary society which may be seen as a political act, similar to Winston’s and Julia’s relationship and the role of governments role in regulating romantic relationships. Hence by outlawing sexual relationships between party members, the party has made every sexual act have political significance and hence succeeded in eliminating human interactions and featuring Stalinist order.

The human experience of a culture of fear and mistrust portrays the way in which human beings yearn for freedom of expression and the lengths they will take to achieve it. In 1984 Orwell presents humanity as divided into two sides- the dominant, and the submissive, establishing various anomalies, paradoxes and inconsistencies in human behaviour. Winston’s rebellious inconsistencies in behaviour first sparked when he bought the diary and started writing in it, exemplified in ‘His pen had slid voluptuously over the smooth paper printing in large neat capitals: ‘DOWN WITH BIG BROTHER”. Repetition of the axion provoking a resistance to conformity, committing thoughtcrime which ultimately establishes a culture of fear provoked by a sense of longing for the freedom of expression.

Similarly, the telescreens are designed to permeate a constant fear of discipline and, most importantly, to serve as a reminder the all-pervading, all-knowing state of the Party. “The instrument… could be dimmed, but there was no way of shutting it off completely.” Orwell employs the constant surveillance of the telescreen ‘unable to be shut off’ upon Winston’s wall as a metaphor for the absolute power of the Party- for it hardly matters if the telescreens work, their power lies in their presence. The hyperbolic metaphor allows the audience to visualise the danger of totalitarianism and to ultimately consider the role of technology and surveillance in their own lives. 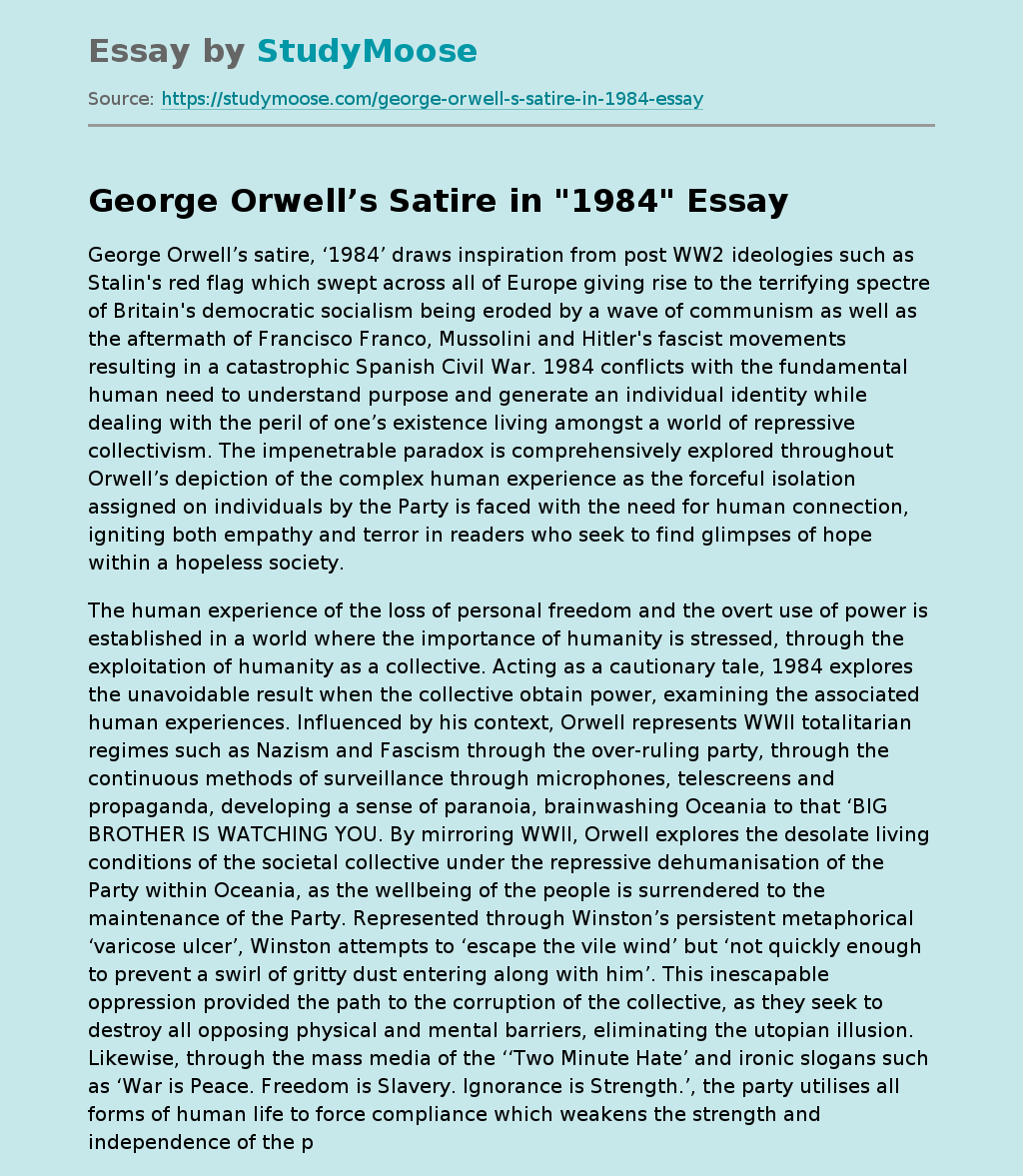