Francisco Goya’s Third of May Painting

Francisco Goya’s ‘The third of May’ was an 1814 painting of Francisco de Goya depicting the execution of the Spanish citizenry resulting from the fighting in the Puerto del Sol area of Madrid. Don Gray in his article Art Essays, Art Criticism & Poems pointed out that, the subject of the painting is the dreadfulness of the execution in which Goya has grouped his picture in four different sets namely, those about to be shot, those already dead, the firing squad, and those about to be shot.

Don't use plagiarized sources. Get your custom essay on
“ Francisco Goya’s Third of May Painting ”
Get custom paper
NEW! smart matching with writer

The painting was done in the context of the aftermath of the popular uprising in Madrid with its background against the French invasion and the monarchic crises it provoked between Charles IV and his son Ferdinand. The title “The Third of May” simply refers to the fateful days of 2 and 3 of May 1808, which was a Spanish uprising against French invaders. As the riots cleared up, French executioner rounded up the ringleaders for execution but as it may be inevitable, many civilians were said to be included in the infamous firing squad of more than eighty peasants on the predawn of the third of may in 1808 at Principe Pio hill, in Madrid.

Historical Issues that may have Influenced the Context of the Work

Francisco de Goya was one of the greatest Spanish painters along with El Greco and Diego velasques. Goya’s Third of May depicts the brutal picture where the Spaniards who fought against French-led were executed on the Principe Pio, a remote hill just outside of Madrid.

Mary Connell describes the uprising that took place on the second of May. The Spaniards were armed with scissors, spoons, knives, and a few firearms .

By mid afternoon the revolt was over but the French were determined to set an example so that the Spanish would not again attempt such a revolt. French soldiers executed eighty-three peasants during the pre-dawn of third of May. This disgusted Goya, feeling that the French liberal reform he had been so pleased at first, had accomplished nothing lasting, as many people had died and suffered as a consequence of the war. Thus, according to Connell, Goya’s work was not meant to be beautiful, but is supposed to be horrifying to frighten the viewer.

Connell emphasized that Goya’s purpose within the painting was not to blame the French but to point out the faceless and mechanical forces of war blindly killing people. The painting also depicts how war is horrible and the impact of violence on humanity, which demonstrates that war is always wrong and generate all kinds of evils. Thus, Connell aptly stated that Goya was hoping to persuade people to resort to war in no way at all .

The impact of the brutality of the war had made great influence on the “Third of May” as the painting clearly conveys the horror of war through violence and death. There are some other interpretation of the characters of the painting such as the man in white whose both arms stretched out, said to be resembling Christ sacrificing his life on the cross, the man on the white seemed to be bravely welcoming death by sacrificing himself which seem to portrayed good and evil, with the French troops representing the evil and the dark side of the war.

Social Issues that may have influenced the Work

Among the social issues that confronted Goya prior to his magnificent work, The Third of May was his loyalty to the French during the occupation. James Voorhies of the Department of European Paintings, The metropolitan Museum of Art, noted that when Goya was questioned about his loyalty to the occupiers, he demonstrated his loyalty to Spain by commemorating Spain’s uprising against the French rule in two paintings: The Second of May and The Third of May. Thus, the social pressure on Goya was that his allegiance to Spain was under question.

His desire to prove his allegiance to the Spanish monarchy has led him to commemorate the fateful days two days of May 1808. Regarding the commemoration of that particular incident, Christopher John Murray pointed out that, Goya’s paintings were designed as part of the celebrations of the return of Ferdinand VII to Madrid. As mentioned earlier, the Third of May was painted by Goya to prove his allegiance to the Spanish Monarch in view of social pressures questioning his loyalty to Spain. Murray however, goes deeper than this issue of loyalty.

He stated that although the painting has become an iconic image of repression, popular martyrdom, and the horrors of civil strife, in which, Goya intended the message to remind the people of the horrors and violence that war brings, but in modern times, Goya’s work has been viewed being not officially commissioned, but he proposed it as a project, as he was in precarious financial situation, and he wanted to gain favor with the regime of Fernando VII to escape being prosecuted for having collaborated with the Napoleonic occupation.

To sum up the social issues that may have influenced the making of the ‘The Third of May,’ are, first, is the issue of collaboration with Napoleonic occupation in which Goya has to prove his allegiance to the Spanish Monarch. The influence of this is seen in Goya’s depiction of good and evil. The good is represented by the martyr and those who are about to face their death through firing squad, while the bad is portrayed by the French soldiers. By this Goya is trying to prove that he is willing to highlight the evils of the Napoleonic occupation.

The second is that he intended to paint day two and day three of May, which was for the commemoration of the horrors of war, but it was also intended to please the newly restored king to gain favor in order to avoid possible prosecution due to his collaboration with the Napoleonic rule. Thus, according to Murray, although the paintings in effect are historical paintings commemorating recent events, they are devoid of the element of heroism. Murray contends that there is no evidence that Goya had witnessed the incident, thus it is clear that the third of May is “a highly imagined and constructed painting.

Regardless of the issues surrounding the painting of the “The Third of May’ Goya has successfully portrayed what he wanted to put on canvas. The Third of May is a powerful reminiscent that war is violent and a waste of life on both sides. The painting is very attractive because of Goya’s brilliant use of colors to emphasize what he wanted the view to read in the painting. What are the Critical issues that may have influenced the context of Goya’s work? There were perhaps a few critical issues that influenced the context of Goya’s work, The Third of May. Among these issues were his deteriorating health and his allegiance to Spain in question.

Kimberly Court cited in her article entitled “Goya’s Black Paintings Harsh, but Honest” that the resulting atrocities on the Iberian Peninsula from 1808 to 1814 forever staining Goya’s insight of Humanity . The uprising that followed after the coronation of King Joseph Bonaparte has persisted through guerilla warfare and continued its war against the Napoleonic armies killing more than three hundred French citizens and capturing French ship. Court pointed out that, the guerrilla warfare was the inspiration behind Goya’s Los Desastres de la Guera or The Disasters of War in English.

Goya was afflicted with serious illness, which according to James G. Hollandsworth the popular explanation of Goya’s illness is that he was suffering from syphilis. Hollandswoth asserts that after this illness in 1789, Goya’s paintings reflected a harsh, cynical view of the world. However, despite of his illness, Polyxeni Potter noted that Goya was an artist opposite and contradiction and his paintings incites horror and gladness, sadness and other images that made potter to comment that Goya’s imagination harnessed the supernatural into a disturbing display of the insensible and unreasonable.

Goya’s allegiance to Spain was questioned in connection to his collaboration with the French. Since this was already discussed above, it is deemed it unnecessary to discuss it further. Conclusion Francisco de Goya’s contribution to arts is now an institution, which benefits sincere students of the arts. Goya was indeed a gifted person whose works can affect a viewer’s mood. His paintings were a powerful reminiscent of the heroism and nationalism of the Spanish people during the Napoleonic era in Spain.

Although his motives in some of his paintings were for personal interest, such as that of The Third of May, it was evident that the painting had left a lasting impression on the effect of war to lives and properties, a lesson that must never be forgotten but to be implanted in the minds of every individual. Francisco de Goya may long been gone, but his contribution in the world of arts will continue to live on especially his use of lights and dark colors.

Francisco Goya’s Third of May Painting. (2016, Dec 01). Retrieved from http://studymoose.com/francisco-goyas-third-of-may-painting-essay 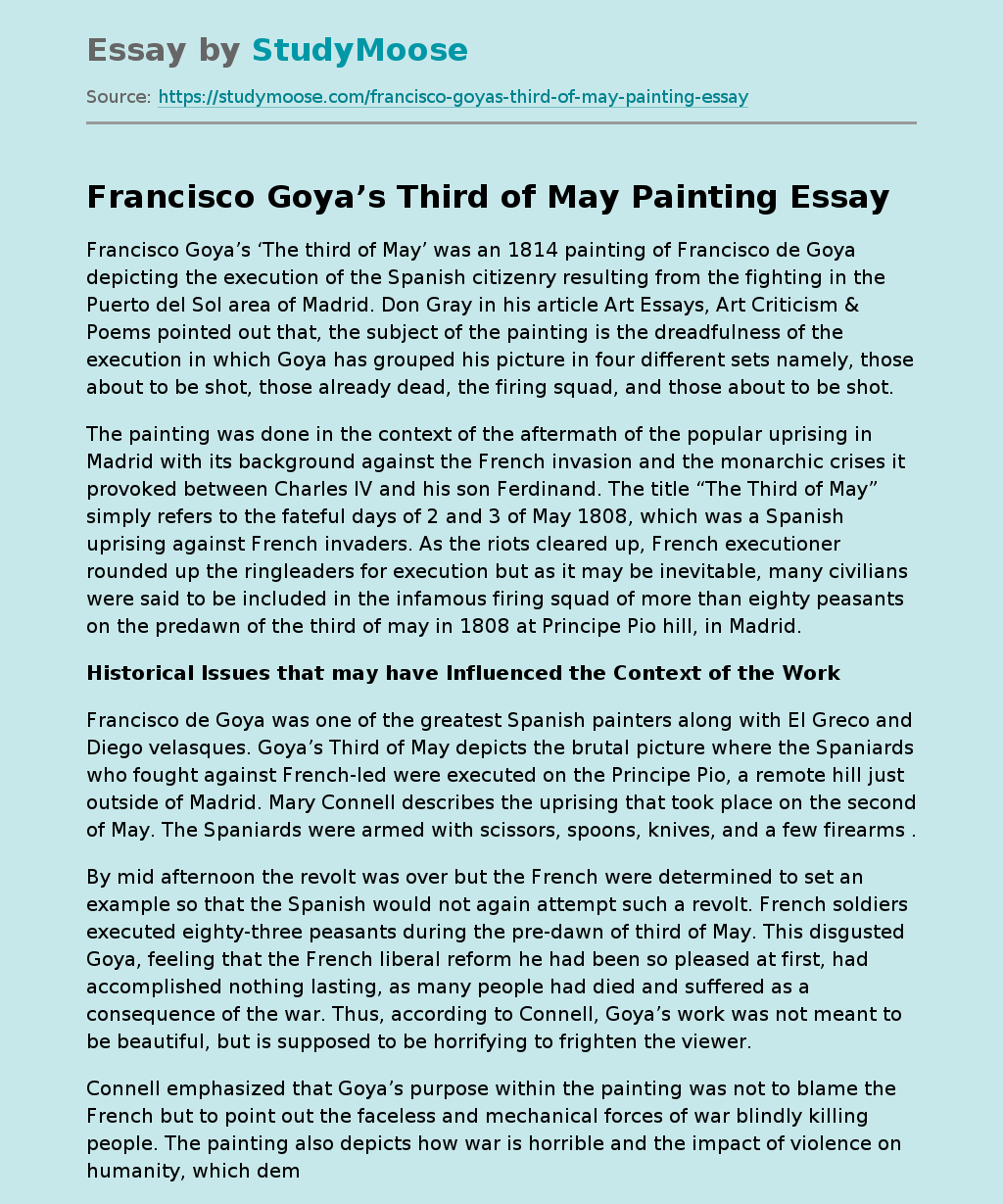