The aim of this paper is to analyze Diego Velazquez’s painting “Las Meninas”, one of the most impressive and controversial art pieces in history. The content and the message of the painting “Las Meninas” provides much food for thought. On the picture we can see the artist himself as he works at a canvas, but we can’t see what exactly he is painting; he is not alone in the studio. A group of seven is situated in the front part of the studio.

Infanta Margarita is in the centre of the group.

Infanta is accompanied by two maids of honour; one is serving her a refreshing drink. We also see Margarita’s playmates – a male and female dwarfs; one of them is teasing a sleepy dog. Two grave adults stand slightly farther than Infanta. The interior of the studio is also rendered with great attention and mastery. Velazquez is an unsurpassed master in light and shadow and delicate harmony of colours.

There exists a variety of possible interpretations of this brilliant picture.

The enigma of “Las Meninas” is connected with the following question: what painting is Velazquez working at? One of the possible interpretations suggests that the royal couple sits for the portrait, because we see them in the mirror on the opposite wall. But such an explanation contradicts some important facts. From history, King Philip IV and her second wife Marianna do not have any portrait where they would be portrayed together done by Velazquez. Therefore we may consider the hypothesis that Infanta Margarita herself sits for the painting.

Velazquez caught the moment when the King and the Queen were entering the room as the mirror restores visibility to that which resides outside our view. Some personages have already noticed them – Infanta Margarita, the maid of honour standing to the right from Infanta and also the painter who interrupted his work to greet the royal couple. The symbolism of the painting is complex. The figures on the painting form a circle which is traditionally considered a symbol of the devotion and service.

Scholars believe that a horoscope is concealed in “Las Meninas” (Vasilakis, 1997). French philosopher and historian Michel Foucault, one of the most influential public figures of the 20th century in European and American intellectual circles, has always been fascinated by the painting. His interest in Velazquez’s “Las Meninas” is associated with the painting’s preoccupation with exploring two philosophical concepts Foucault explored extensively in his works, namely the concept of the gaze and the concept of representation.

The fact that the painter (a self-portrait of Velazquez) is looking at something that is supposed to be invisible to the spectator invites those regarding the painting to apprehend themselves. Thus, spectators are prescribed an active rather than passive role in observing the painting: “We are observing ourselves being observed by the painter, and made visible to his eyes by the same light that enables us to see him. And just as we are about to apprehend ourselves, transcribed by his hand as though in a mirror, we find that we can in fact apprehend nothing of that mirror but its lustreless back.

Foucault’s exploration of the process of observation is based on the interactionist approach to knowledge creation. As O’Farrell (2008) informs, “Foucault uses the word [gaze] to refer to the fact that it is not just the object of knowledge which is constructed but also the knower. ” The painting represents spectacle-as-observation, given that the painter and other figures look at the painter’s models that should remain invisible to the spectator. Yet the spectator can see the painter’s models, King Philip IV and his wife, in the mirror that is placed at the wall in the back the room.

While spectators can see the figures in the mirror, the painter himself or anyone of his posse are not looking at the mirror, so it remain invisible for them. Foucault (1994) notes that “[t]here are, it is true, some heads turned away from us in profile: but not one of them is turned far enough to see, at the back of the room, that solitary mirror, that tiny glowing rectangle which is nothing other than visibility, yet without any gaze able to grasp it, to render it actual, and to enjoy the suddenly ripe fruit of the spectacle it offers. ”

This phrase calls into the question the foundations of solipsism – whether objects actually exist if not regarded, observed, gazed at by a living being. Foucault’s statement that the mirror is not rendered actual by anyone looking at it suggests that the painting implicitly probes the concept of solipsism. The notion of gaze, central to the analysis of the painting, is linked to a variety of other, more substantial philosophical issues. For example, Foucault’s interest in the problem of representation stems from his conviction that representation is inherently linked to knowledge. Las Meninas,” by virtue of its spatial organization, allows application of deconstructive techniques to analyzing the painting itself and critically reflecting on concepts that are employed in this analysis. As Denzin (2007) notes, “a deconstructive reading engages four paired terms:

The painting offers an opportunity to reflect on all these relationship in order to arrive at the correct judgment about the nature of representation. Foucault believes that Classical representation as defined in pre-Renaissance period based on equating thought and representation (i. e. the process of thinking was defined as using ideas to represent objects) was limited in its inability to explore the real meaning of representation. The problem of the relation between reality and its representations is solved differently under different epistemological regimes.

He discusses the sun as an example of interrelation between the two realities: the representation of the sun in human thought is a small two-dimensional circle in the sky, while the formal, or real sun is huge and spherical (Berreitter, 2000). Foucault poses a question of how can humans verify whether representations of objects are adequate. It is an impossible task since for the reason it will require comparing idea with the object independently of its representation. However, humans do not know object – only their representations.

As Stanford Encyclopedia of Philosophy (2008) informs, “[t]he only possibility is that the idea itself must make it apparent that it is a representation. The idea represents the very fact that it is a representation. ” This is precisely why Foucault (1994) believes in the exceptionality of “Las Meninas. ” Due to the spatial organization of the painting, “the necessary disappearance of that which is its foundation – of the person it resembles and the person in whose eyes it is only a resemblance. This very subject – which is the same – has been elided.

And representation, freed finally from the relation that was impeding it, can offer itself as representation in its pure form. ” Therefore, “Las Meninas” is a unique painting that is able to provoke an in-depth exploration of core philosophical concepts. The fact that the painter is gazing at something that is visible to spectators in the mirror which the figures at the painting do not observe implies that the painting goes beyond the limits of Classical representation and calls for a deconstructive reading of the artwork. 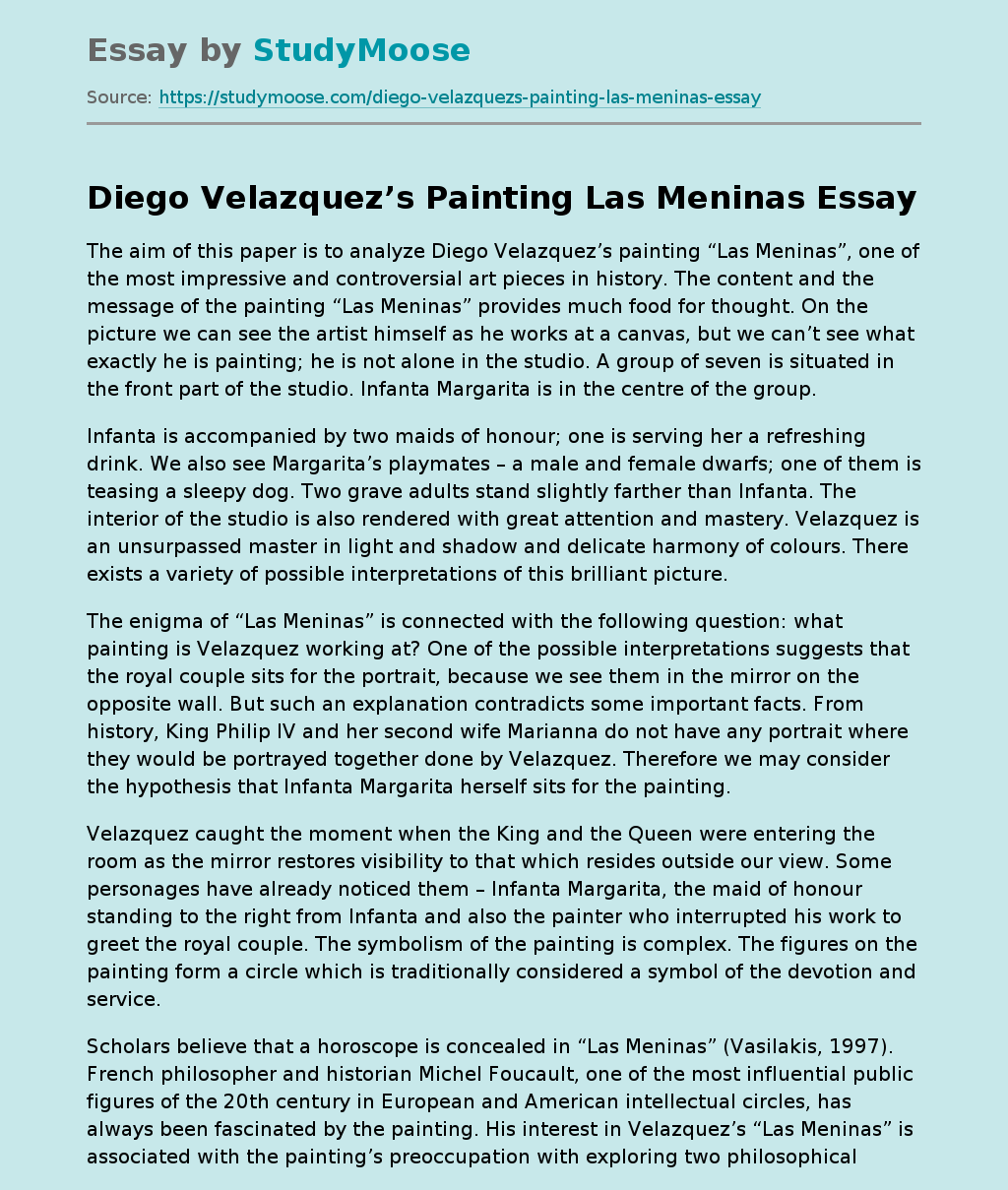