Giotto's Painting The Lamentation of Christ

The “Lamentation of Christ” is one of the most popular subjects in the realm of Christian Art. It became extremely popular from the 11th century to the early 18th century, encompassing vast art periods from the Byzantine art period under the Medieval era of art, to the Baroque period of the Renaissance. Numerous works have been created, centering on this one scene that is of great import, not only to the Christian community but to the art world itself. One of the most popular scenes in Christian history, the Lamentations showcases Jesus Christ, brought down after just having died on the cross.

Turn in your highest-quality paper
Get a qualified writer to help you with
“ Giotto’s Painting The Lamentation of Christ ”
Get high-quality paper
NEW! AI matching with writer

His mother Mary is shown often with Jesus in her arms weeping and mourning the death of her son. Surrounding them are several other mourners, comprising of Christ’s friends and family. As it is also a popular episode in the life of Christ, it is also included in many depictions of the Life of Christ, a form of Christian art that serves as a narrative or an early form of sequential art that tells the story of Jesus Christ from his conception to his resurrection and ascension into Heaven.

This led to many different artists coming up with different versions of the scene.

The numerous renditions of the same scene, scattered from the 11th century to the 8th century, is a good way o gauge the development of art at a fixed period of time. One of the first few examples is a fresco in the Church of St.

Panteleimon, a small Byzantine church in Macedonia. The painting was made by an anonymous artist, known only as “Meister von Nerezi” or “Master of Nerezi”. The piece, Lamentation over the Dead Christ in the Church of St. Pantaleimon, was done in 1164 which was the Middle Byzantine period.

During the time, Christian art revolved around a strict set of rules which restricted many artistic ideas, and as the setting was that of the period of changes to the Byzantine style, the art for the Master of Nerezi’s Lamentation piece was something relatable to “Maniera Byzantina” (Lasareff 279). Lamentation over the Dead Christ in the Church of St. Pantaleimon (1164) Obvious within his work is the ability to evoke feelings of empathy and even sympathy from its beholders, perfectly capturing the essence of mourning and overall sadness of the scene. This despite the image’s adherence to the strict formal rules of Byzantine art.

It also features a more definitive sense of emotion as opposed to other works of the era which tended to keep a more solemn depiction of things. Also of note is the Master of Nerezi’s composition of the piece, having Mary hold Jesus tightly, arms wrapped around the dead body, while a disciple bends over to hold his dead master’s hand to his face. The resulting placement of subjects evokes a spatial setting that proves schematic and well thought-out. Giotto’s “Lamentation” on the other hand, is a fresco showcased at the Arena Chapel in Padua, and is one of the most popular Lamentation pieces created.

It too depicts the mourning of Jesus Christ, portraying him laid on the ground right after dying from his crucifixion, surrounded by friends and family, with Mary at his side, mourning and expressing great sadness in their faces. Giotto di Bondone, or simply Giotto, as he is more widely known, was a famous artist in the late Middle ages who specialized in painting and architecture. His works attributed to his being considered one of the first artists whose works led to the eventual birth of the Italian Renaissance, the period which signaled the end of the Medieval ages and gave rise to Early Modern Europe.

The “Lamentation” is one of the best examples of his work, which was famous for the fuller, more three-dimensional style of painting that would only become more prominent in the Renaissance period, which wasn’t to become popular until around century after Giotto. (Webmuseum 2010) “The Lamentation” (1305 – 1306) Dating back to around 1305 – 1306, Giotto’s work on the”Lamentation” featured Christ being held by Mary, Jesus Christ’s mother, at the head, and possibly Mary Magdalene at the feet as the woman is shown with red hair and Mary Magdalene is known to have washed Jesus’ feet.

In terms of the painting’s composition, Giotto focused on the sad scene of mourning in the lower left area, having Jesus and Mary framed by the six other people who are seemingly spaced appropriately to bing the viewer’s attention to the Mother and Son. Surrounding them are disciples of the fallen savior, as well as hallowed saints – all of them in mourning, effectively conveying the overall mood of sadness about the image. Immediately behind the gathered crowd is a scraggly rock mound – its sharp, downward line leading to the images focal point of Jesus and Mary.

Above them are angels, flying around with sad,mourning, grieving faces, their figures notably foreshortened to denote a deeper, more three-dimensional feel to the piece. Looking back at the fresco done by the Master of Nerezi, the Italo-Byzantine style of art is still most obviously definitive in his work: basically two-dimensional whilst combining elements of the Byzantine art style with those of the natural world, the Lamentation over the Dead Christ in the Church of St. Pantaleimon features a flat-looking image which is iconic in its nature.

Done during the Comnene Dynasty of rule which lasted from 1025-1204, the Master of Nerezi’s Lamentation was timely as due to the Comnenans being staunch supporters of the arts, the general art direction went towards the depiction of emotions, with themes such as the Lamentation and the Virgin and Child being among the most popular of the day. Whereas Giotto’s work was done as a part of a series depicting the Life of Christ, which was part of the Arena Chapel whose interiors were decked with frescoes by Giotti. It was finished in 1306, during that time when the Byzantine style of art was still somewhat prevalent among artists.

Considering the relative gap between the creation of the two Lamentation pieces, it isn’t surprising to find that there is a huge difference between the two art styles used – where one used a more traditional Byzantine style of flatness while the other utilized a more realistic and natural mode which was at the time, a style of the artist’s own – but considering that at the time of Giotti’s work, the style used by the Master of Nerezi was still what was of standard, then it denotes a significant leap forward in the art medium.

Both pieces being of the same topic which is the Death of Jesus Christ, the overall theme of sadness and mourning over a death is reflected effectively by means of expressing emotion on the faces of the characters as depicted by their frowns and sad eyes and faces. Their postures are also indicative of the plight they are going through in the image. Also common is the disciple leaning in to meet his master’s hand,hence the posture of bending over, creating a line that leads to the point within the image wherein Mary keeps her face close to the dead Christ.

In the case of the Lamentation over the Dead Christ in the Church of St. Pantaleimon, despite being tied to the art style of the Byzantine times then which often featured religious pieces in symmetrical compositions, the image remains asymmetrical as is common in Lamentation pieces. Perhaps the major difference in terms of the subject matter for both images is that there are more characters in Giotto’s piece.

Aside from Jesus’ friends family, and disciples who mourn by his side, in Giotto’s version, angels decked in bright colors are flying around above them, sobbing and weeping as well. In general, both paintings clearly get the message across to the beholders, and almost always evokes feelings of sadness and understanding from its onlookers as well. In summary, the analysis of the two paintings which are different renditions of two different artists on the same theme, gives a peek of what the development of art styles was at the time.

From the Lamentation over the Dead Christ in the Church of St. Pantaleimon by the Master of Nerezi in 1164’s Byzantine style of art, to the groundbreaking realism and classicism as well as the incorporation of three-dimensional elements in Giotto’s “Lamentation,” it shows that art, like many other aspects of human culture and society, also develops at a rate that coincides with the development of humanity as a whole.

Giotto's Painting The Lamentation of Christ. (2016, Sep 10). Retrieved from https://studymoose.com/giottos-painting-the-lamentation-of-christ-essay 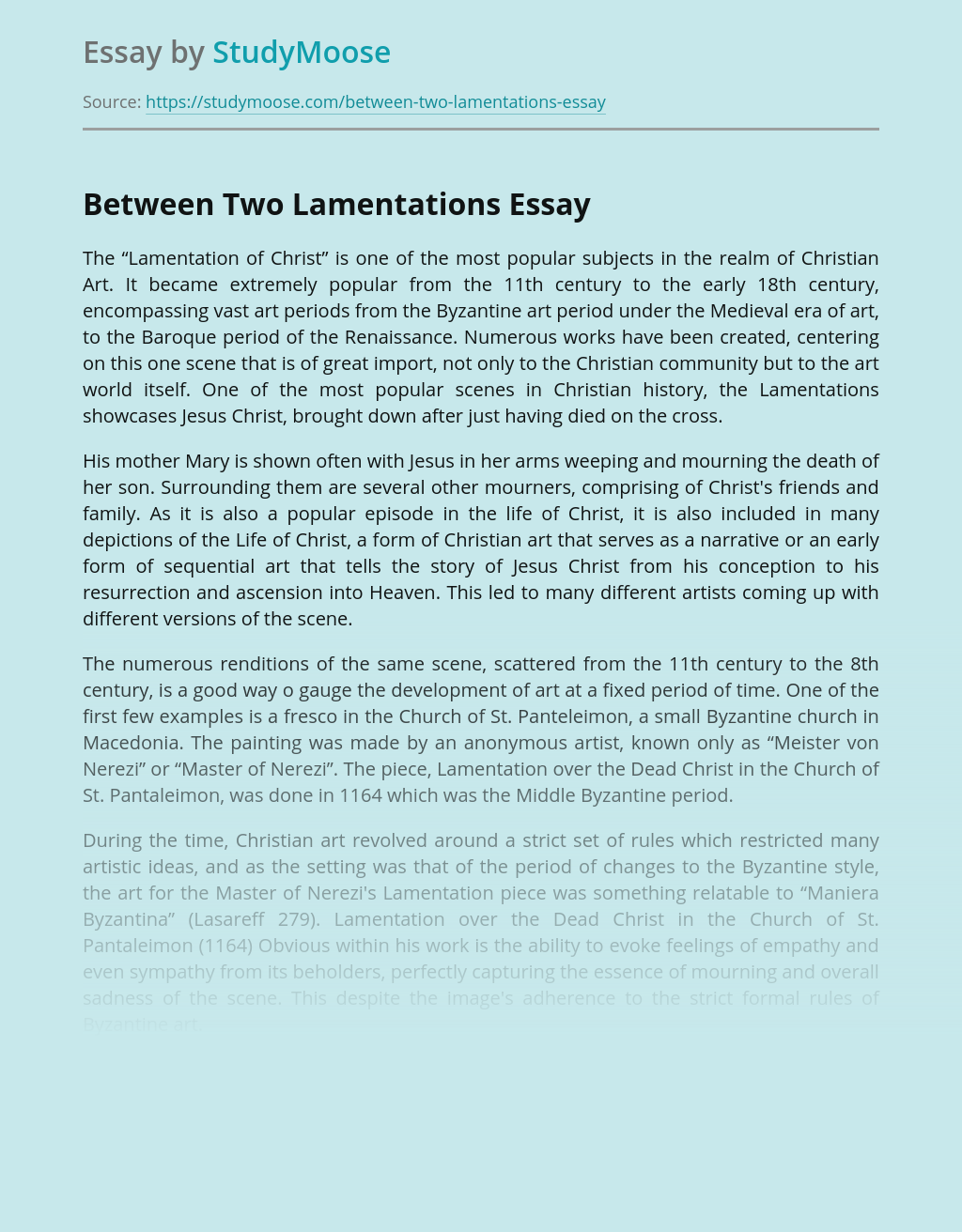 Turn in your highest-quality paper
Get a qualified writer to help you with
“ Giotto’s Painting The Lamentation of Christ ”
Get high-quality paper
Helping students since 2015
Stay Safe, Stay Original