Early Christian art was highly influenced by religious, political, and cultural modifications. In contrast to the classical, idealistic portrayal of guy, Early Christian art took a much more elegant approach to the representation of man, with an overlooked attention to human anatomy. The subject matter of much of the art turned from nonreligious to spiritual; Christianity to be more particular. Constantine was the last emperor of the Roman Empire to hold concentrated power. Under his guideline, Constantine produced the Order of Milan, giving spiritual tolerance to all religions.

This was of specific significance to Christians, who had been previously maltreated due to their spiritual beliefs. Due to the fact that of the Edict of Milan, many Christian buildings were put up in addition to the numerous secular structures that were transformed into Christian buildings. These structures housed countless varieties of invaluable spiritual artworks. One such example is the Transfiguration of Christ mosaic situated in Saint Catherine’s Monastery in Sinai, Egypt.

When Constantine moved the capital of the Roman Empire to Byzantium, which he relabelled Constantinople (contemporary Istanbul), the Empire separated. Upon the division of the Roman Empire, Justinian, The Last Roman Emperor, held power over the Eastern Roman Empire from 527 to 565. Justinian was both a political and religious leader. Under his reign, many Christian buildings were constructed. Justinian typically associated himself with Jesus Christ in the Byzantine artworks that these Christian structures housed as a kind of propaganda. The Orthodox Church now recognizes Justinian as a saint.

Byzantine is a term used to describe eastern Mediterranean art from 330 to 1453, when the Turks conquered Constantinople (Strickland, 1992, p.

24). Mosaics were one of the most common forms of art during this period. They were intended to publicize the Christian creed through their religious subject matter (Strickland, 1992, p. 25). Byzantine mosaics are composed of small, colorful glass or stone squares and rectangles, called tesserae, embedded in wet cement or plaster. These tesserae were arranged in a manner through which they formed images. Typically, Byzantine mosaics are located on the walls and ceilings within a church apse and dome (Strickland, 1992, p. 25). The artists of these mosaics left the tesserae with jagged surfaces to create the sparkling, illuminated effect that distinguishes these mosaics from those of other periods and places (Strickland, 1992, p. 25).

The exteriors of Byzantine Christian structures were very plain in contrast to the elaborately decorated interiors. The awe-inspiring mosaics and icons brought the focus of the buildings to the interiors. Perhaps this was a method to spread the word of God by attracting people to come inside the buildings.

Byzantine mosaics contain many characteristics that distinguish them from the rest. The typical gold background of a Byzantine mosaic creates a sense of weightlessness within the figures, as if they are floating. Byzantine artists depicted sacred figures with halos, separating them from the other figures. With nude images having been forbidden, one can hardly make out the anatomy of the fully clothed figures. Though it is evident that symmetry was greatly appreciated, it is also evident that the mosaics lack perspective. The figures depicted in the mosaics are flat and frontal facing with linear details. They are often slim with almond shaped faces and large eyes. The images depict little to no movement, creating a sense of stillness. These highly stylized Byzantine mosaics show disregard for Greco-Roman ideals.

The Transfiguration of Christ is located in the main church, Katholikon, in the apse over the high altar. The subject of this mosaic was an appropriate selection to portray in Saint Catherine’s Monastery because of its location at the foot of Mount Moses (Watson, 1999). In Christianity, the story claims that Jesus led three of his apostles, Peter, John, and James, to pray atop a mountain. It was here that Jesus transfigured, with his face shining like the sun and wearing bright white clothing. On both sides of Christ, Moses and Elijah appeared. Overhead, a brilliant cloud appeared, and God’s voice emerged from the cloud proclaiming, “This is my Son, the Beloved. Listen to him.” It was then that Jesus spoke with Moses and Elijah about his upcoming death.

The artist of this mosaic is unknown because artists went unrecognized until much later. This mosaic is in the form of a triumphal arch, bordered by medallions occupying the busts of the twelve apostles, fifteen prophets, Longinus the Abbot, John the Deacon, two angels, and a Greek cross in the top, center (Watson, 1999). Jesus Christ is depicted in the center of the mosaic with black hair and beard. He was placed in an oval mandorla with a cross and a bright yellow circle depicting his illumination behind his head. Rays of light are shown coming from Christ’s body. In addition to the mandorla depicting Christ’s holiness, this was done to make Christ the emphasis of the mosaic as well as to distinguish him from the other figures. Elijah is shown on one side of Christ, while Moses is shown on the other. Beneath Christ, Peter, John, and James are portrayed with awe (Watson, 1999).

The Transfiguration of Christ contains all the elements of Byzantine mosaics. It has a bright gold background. The figures are dematerialized and one cannot tell which figures were intended to be floating and which are not. One can hardly make out the figures beneath the clothing and the only skin shown is on the figures’ faces, hands, and feet. All the figures were placed symmetrically around Christ, making him the focus of the mosaic. The halo and mandorla around Christ show his holiness. Only slight movement is shown through the figures’ poses. The figures are very flat, despite the attempts of the artist to show shadow and overlapping. All of the figures are slender with almond shaped heads and large eyes. One can hardly see perspective when observing this mosaic. 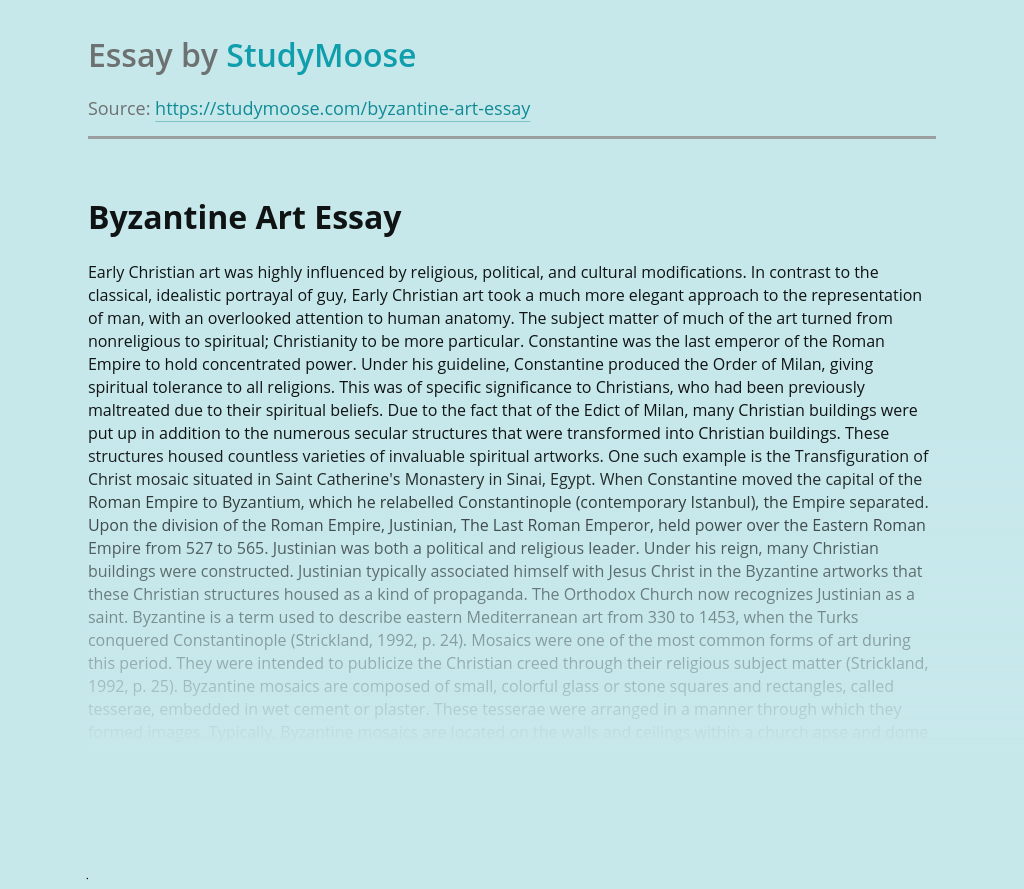