Las Meninas is considered to be Diego Velazquez’s magnum opus. Painted in the 1600s, this 3D painting was ahead of its time. Deviating from his classic bodegon art or genre based painting, Diego created a surreal impression of the royal family that permanently put him above his peers. Originally named “The Family of Philip IV”, the painting creates a picturesque representation of the royal family. And Diego did not see the need to sign his name on it- he instead included himself in it, doing what he does best- painting.

Don't use plagiarized sources. Get your custom essay on
“ Analysis of Painting Las Meninas by Diego Velazquez ”
Get custom paper
NEW! smart matching with writer

Diego Velazquez was born on 6th June 1599 in Seville, Spain. He began his apprenticeship at the age of eleven under Francisco Pacheco and later married his mentor’s daughter, Juana in 1617. After his move to Madrid in 1622, his father-in-law gave him the chance to paint the Count-Duke of Olivares, who recommended him to King Philip IV. His move to the king’s court exposed him to great painters, such as Peter Paul Rubens, who had spent several months at the court in 1628.

One of his notable paintings in this period is The Triumph of Bacchus, in which the Greek god of wine casts a spell on a group of revelers. He was also influenced greatly by renowned Italian artists such as Caravaggio after several trips to Italy. It was during these trips that he got the honor of painting Pope Innocent X, which became one of his finest portraits. After his return to Madrid, he painted his most revered work Las Meninas featuring the young Margarita Theresa in 1656.

Two years later, he was bestowed the honor of a knight of Santiago. He died on 6 August 1660.

The setting of the painting is the cuarto bajo del principe, which was both Diego’s art studio and his dwelling place. Infanta Margarita Teresa (1651-73), the little blonde girl is the focal point of this painting. She is being attended to by two maids of honor. On the left is Maria Agustina, kneeling before the future queen and offering her a drink from a red cup. To the princess’ right is Isabel de Velasco, holding her dress and probably doing a curtsy for the young princess. Slightly in front of the curtsying maid are two dwarfs, Maribarbola with her disfigured face and Nicolas de Pertusato, who appears to be kicking a resting dog.

Behind them is Marcela de Ulloa, who was the ladies’ governess and an usher. Further behind them is an open doorway, where Don Jose de Nieto Velazquez appears to be drawing aside a curtain to allow light to enter the studio. Don Jose was the Marshall of the queens’ palace. To bring realism into the portrait, he meticulously brings into effect the 3D diagram of his studio with paintings on the walls. The portraits highlighted behind Velazquez were done by Sir Peter Paul Rubens. They include the Judgment of Midas and Pallas and Arachne.

There is also a mirror directly behind the young princess reflecting what appear to be images of the king and his queen. Diego uses a contrast of light and darkness to bring focus to the princess Margarita and her two maids of honor- sealing their images as the focal points of the portrait.

The Bone of Contention

The question that has been bothering people since the portrait was made is who does Velazquez paint? Clearly, the painting Velazquez does not cast a glance at the individuals on the portrait. His attention is fixed upon something past the image field. It seems that every one in the portrait is concerned with what is in front of them just like the painter. The answer lies in the mirror behind them, which reflects the image of the King Philip IV and his queen. They appear to be seated and posing as Velazquez does his magic.

Las Meninas is therefore a ‘behind the scene’ representation of what happens during the making of royal portraits. King Philip IV was indifferent to being portrayed as old and he therefore shied away from many portraits. This could have facilitated the artist’s unconventional approach to making this painting. Velazquez therefore concentrates on the Infanta and then gives us a glimpse of the old king through the mirror. It is no wonder it was renamed from ‘The Family of King Philip IV’ to Las Meninas, because it is the maids of honor who are at the center of the drawing. We are actually witnessing art from the king’s eyes or his wife’s.

His apparent love for distracting viewers from the main figures of his portraits is also prevalent in his other masterpieces, notably:
Christ in the house of Martha and Mary, where Christ and his friends are only visible through a serving hatch and the Rokeby Venus, where the face of the central figure is completely blurred in a mirror. While we may never know what he had in mind while making these portraits, theorists believed that he had an unconventional view that life was an illusion. Since he was under the Spanish king- the custodian of the Roman Catholic beliefs, he could not air his sentiments openly and therefore opted to create illusionary art.

Las Meninas remains to be Velazquez’s greatest work, outshining all his other Baroque art works including Christ on the Cross (1632), Portrait of pope Innocent X (1650), The Surrender of Breda (1634) and The Waterseller of Seville (1622).

Analysis of Painting Las Meninas by Diego Velazquez. (2018, May 08). Retrieved from https://studymoose.com/analysis-of-painting-las-meninas-by-diego-velazquez-essay 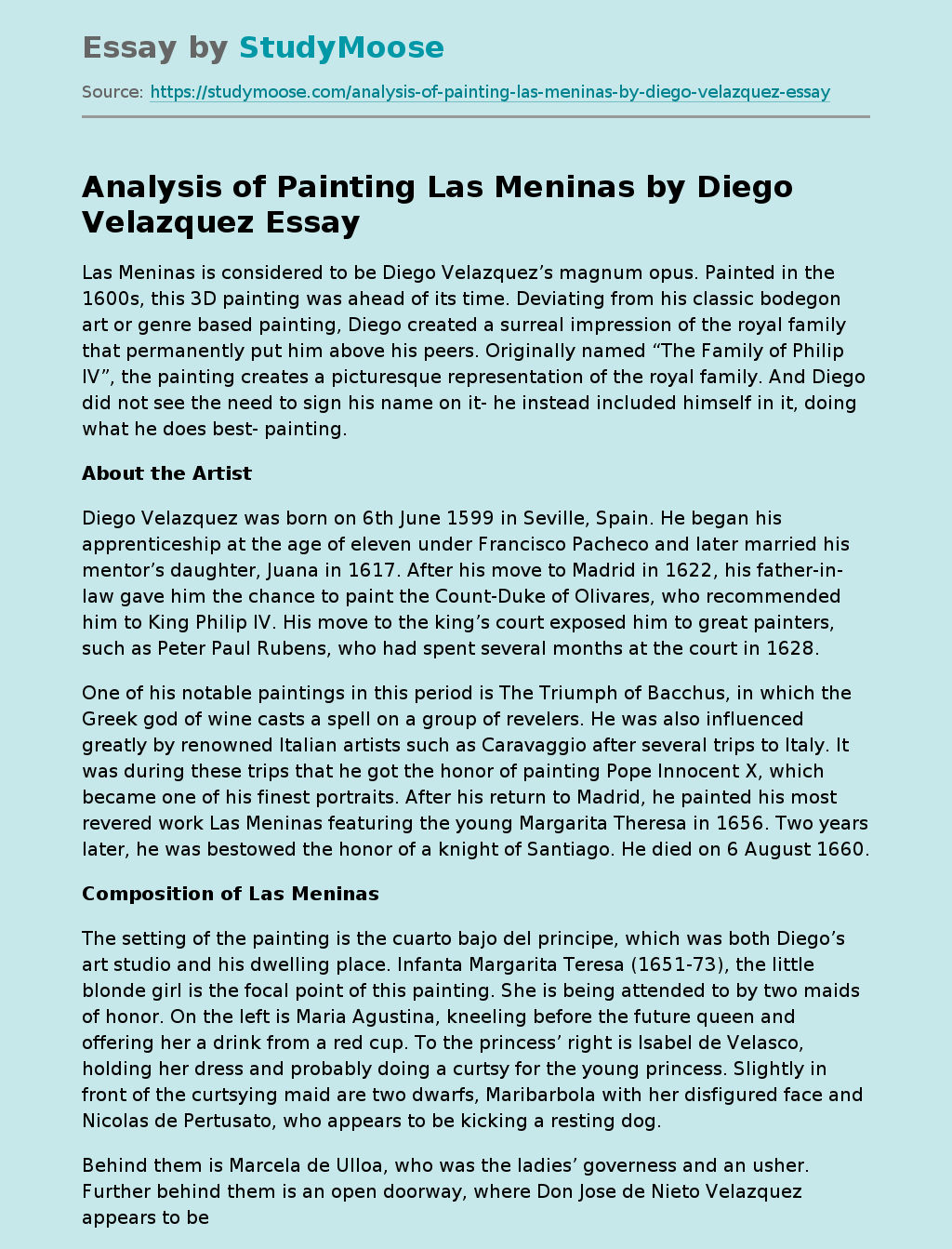