Over the many decades the economic standing of the United States, specifically California, had fluctuated due to many unforeseen factors. One huge factor that cannot be anticipated, and often causes drastic effects on the economy, are geologic disasters. The state of California is notorious for having earthquakes that shake up the state quite often and leave the affected area with a substantial amount of damage. The 1906 earthquake of San Francisco was the largest geologic disaster known to the nation at the time it occured.

Don't use plagiarized sources. Get your custom essay on
“ San Francisco 1906 Earthquake ”
Get custom paper
NEW! smart matching with writer

Destroying about 80% of the city, this earthquake also caused an enormous amount of fires to break out throughout the city. Not only did the state of California have to build up funds to reconstruct the city, but also other states and nations provided economic relief to help rebuild the ninth largest city in the United States. As one of the most metropolitan areas in the West Coast of the US, San Francisco had a humongous task at hand to make this once financial, trade, and cultural center flourish once again.

The magnitude of the earthquake caused widespread destruction due to the geologic setting of San Francisco, but also the destruction of buildings was due to the makeshift quality of the construction of the city. If there were to be a repeat of the quake today, it could possibly be more devastating than the first one. Therefore, the economic affect that an earthquake the same size as the one in 1906 would have on California would be far more disastrous and far more expensive due to the heavily dense population, the many old buildings still in use, and the costly price of real estate today.

California lies between two active plate boundaries known as the North American plate, which moves south, and the Pacific Plate, which moves north. These two plates are connected by the continental transform plate boundary known as the San Andreas Fault. This fault makes up about 1300 km of boundary between the two plates and runs through California’s coastal region for about 800 miles. The San Andreas Fault line extends from the Mendocino Triple Junction in Northern California, all the way down to Salton Sea in Southern California.

According to the California Geology textbook, by Deborah R. Harden, since 1812 California has had four big earthquakes along the San Andreas, all reaching over 6. 9 and at a maximum of 8. 0 in magnitude. On April 18, 1906 the San Andreas Fault intensely made its presence by causing a 7. 8-8. 0 magnitude earthquake to the city of San Francisco. During this time San Francisco was a booming city for all people. Living off the wealth of the gold rush, the city was the ninth biggest in the nation with a staggering 400,000+ people living within the city.

It became a city rich in culture and led the West of the United States in financial endeavors and trade markets. At precisely 5:12am a foreshock occurred that was felt throughout the San Francisco Bay area and lasted for about 20 to 25 seconds, then came the big shake. Lasting about 45-60 seconds the earthquake was felt from southern Oregon to the south of Los Angeles and inland to central Nevada. Surrounding cities like Santa Rosa and San Jose also suffered severe damages from the quake, including the permanent shift of the Salinas River of about 6 miles south.

Within moments of the earthquake the shock caused massive fires due to the rupturing of many gas pipes, sparks from broken power cables, and the warm temperatures claimed to have been unseasonal for the time. Smashed water mains made it near impossible for firefighters to put out fires that consumed mostly wooden buildings. According to California Geology, a reported 3,000 people were killed in the wake of the quake. Some 225,000- 300,000 people were left homeless, out of the 400,000 people in San Francisco.

The damage was reported to be about $524 million, which would amount to over $8. billion in 2009. If an earthquake anywhere close to that magnitude were to occur in San Francisco on the fault line, total devastation of many regions of the city would be destroyed. In the article “Repeat of Quake of 1906 Could Be Even More Deadly” by William Booth of The Washington Post, it states, “As many as 3,400 dead, mostly crushed by buildings; up to 700,000 people displaced or homeless; 130,000 structures extensively damaged or destroyed; and immediate losses exceeding $125 billion…” He later concluded to state that this would nleash mayhem far beyond that of Hurricane Katrina.

Many scientists from the USGS have said that the outcome of the quake would in fact be more devastating than the original one due to how much more densely settles the region is. Running along 300 miles of the San Andreas Fault, the 1906 earthquake was felt in areas where now, over 10 million residents live and 3. 5 million buildings are located, which are valued at $1 trillion. Senior research scientist Mary Lou Zoback inferred how vulnerable the majority of the urban areas of the Bay Area are.

Many residents live in areas where buildings were made previous to the tightening of 1970 building codes, which makes up about 80% of the city’s housing, therefore putting an astounding 400,000 to 700,000 people potentially homeless. As Zoback continues, she mentions the possibility of all those homeless people trying to leave, “where are they going to go, when roads will be impassible, when the major north-south freeways are damaged, when the east-west tunnels are closes due to landslides?

When, even if the bridges stand up, you many not be able to get to them? ” The destruction of the 1994 Northridge earthquake caused damages amounting to $20-40 billion, and that was a 6. 7 magnitude earthquake. The economic effect it would have on the Bay Area if a 1906 quake was to hit, would be far worse. Along with the damage done to buildings, the water system would be in danger as well. San Francisco receives 80% of all water via a single pipeline from the Sierra Nevada Mountains, over 150 miles away.

The pipeline crosses over 3 major earthquake faults and would pose a high risk for all the misplaced people. The cost to fix that pipeline would be very expensive, taking into consideration that a project to fortify the pipeline is currently advancing and will not be finished until 2016, according to Tony Winnicker a San Francisco Public Utilities Commission spokesperson. He also stated that when the project is done and if a major catastrophe was to happen, basic water would still flow 24 hours after the breakage and full water delivery would be available after 30 days.

Once again, the funds and willpower to rebuild all of this would be close to impossible to receive immediately. As what occurred in the 1906 earthquake, insurance companies had to send such substantial amounts of money and gold to San Francisco that a shortage occurred on the East coast and in Europe. Transfers from European insurance companies to policyholders in San Francisco increased interest rates, which led to the scarcity of oans available, therefore, to the creation of the Knickerbocker Trust Companies crisis of October 1907 and the Panic of 1907. What is there to say that this would not happen again? According to Jennifer London of NBC News states, “the total economic loss of the region, just due to damaged buildings and the contents of the buildings is estimated to be a little over $120 billion. ” The price of land in the Bay Area has skyrocketed in the past decades, especially in the Silicon Valley.

The amount to rebuild the high tech companies now present in the once farm land between San Francisco and San Jose, would be unseen for due to the fact that the profit of companies in the valley topple over $300 million in 2006 alone, imagine it six years later. Without a doubt stocks of these companies would suffer because of the lack of productivity that can happen without a facility. Every aspect of life would differ if a catastrophic earthquake were to occur. An enormous part of our economic infrastructure would be taken out entirely and relief would be needed from the whole nation.

In 1906 a total of $5 million was raised a few days after the world got a hold of the news, today the relief effort for something so devastating would surpass that enormously. If the City of San Francisco were to ask for relief from the nation, the military forces would have to be called in for aid to assist the local firemen, policemen, and volunteers to search for survivors. Assuming this would have to happen, a large amount of money would also be needed to shelter and feed all the displaced people.

Another factor would be a situation regarding hospitals and transportation of patients to different hospitals due to overcrowding. This would make the economy of the Bay Area fall into a deep recession, far wore than what it is now. The value of the property would depreciate along with any investments that are in the city. Overall, the city of San Francisco, and surrounding cities, would all suffer a great economic loss if an earthquake with the same magnitude of the 1906 earthquake were to reoccur. 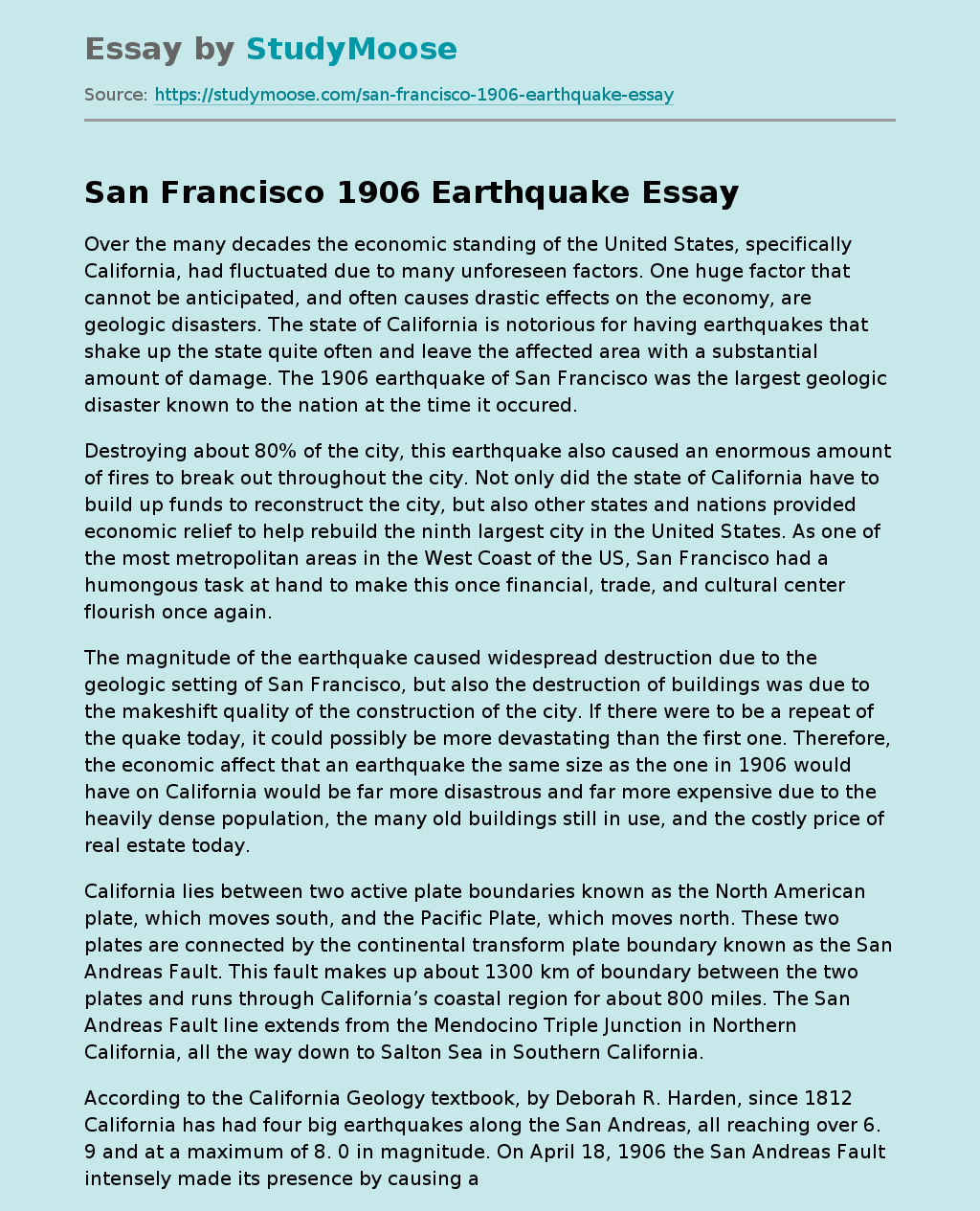