"Guernica" by Picasso and The "Third of May" by Goya

Picasso’s “Guernica” (1937) and Goya’s “The Third of May” (1814) are paintings that are created to communicate an issue of concern of the artist. In order to truly understand the impact that these paintings have on people, and why that impact is so strong, a person must analyse the content of them.

The first reaction of the “Guernica” by Picasso is one of mayhem, destruction, lost souls and death. The entire painting is dark with cool colours and no sign of warmth.

Don't use plagiarized sources. Get your custom essay on
“ “Guernica” by Picasso and The “Third of May” by Goya ”
Get custom paper
NEW! smart matching with writer

There are scattered distorted figures not exactly looking like humans but many figures taking the human form with faces in obvious confusion. The piece is representational and has asymmetrical balance.

The visual elements are used very efficiently in respect to lines and colour. The curvature contrasted along with the use of jagged lines helps create the chaotic feeling produced even in the midst of such cool and warm colours. There is a lot of overlapping figures and not much space between any, but the shading around helps create the feeling of space.

There are implied lines within the shading. The artist likely used a limited palette for this painting. The positive shapes are the lightest of the painting and the negative shapes are the darkest and sometimes even empty shapes.

The use of curvature and lines helps create unity. The point of emphasis is established by using lighter shades in the midst of very dark colours. The focal point is likely the bull like figure in the top left because everything is pointed there and all the faces are looking at it.

I believe the main theme of this piece is to show the devastation that can be caused by chaotic or tragic events and how they can affect more than just a few individuals. Picasso created this work to the German bombing of Guernica. He believes the world is beginning into a very violent stage and knew there would be great devastation. Picasso himself said that the meanings of his paintings are to be held within the viewer. Although Picasso had many talents, his painting was his forte so to say. He dominated the painting world and knew his ideas would be more available and impacting as a whole creating a much more effective message.

Through the artwork “The Third of May”, Goya painted an event that took place on the second and third of May 1808, when the citizens of Madrid rose up against the French invaders and received on the following day a swift and barbarous retribution. On the left of the painting, a group of unarmed civilians kneeling in a mingled pool of blood and dead bodies, backed against a mound facing a firing squad, members of the firing squad on the right, are ready and committed to carry out the executions, a group of spectators have gathered past the condemned and the executioners to witness the event. The dark sky in the background is sad and gloomy, and a palace looks lifeless and has lost all its grandeur. The only illumination in the painting comes from a lantern at the feet of the soldiers.

Initial observation arouses sympathy in our heart for the helpless men who are facing death, but careful analysis would help us understand that perhaps they do not deserve sympathy. Instead these men are facing justice the table of oppression has turned against them. A monk among the condemned civilians reminds us vividly of the Spanish Inquisition. Spain bathed in death and destruction, but the time has come for them to meet their fate. Goya did not show us the faces of the executioners because it is unimportant who is carrying out justice. Some may think those are French soldiers, but their uniforms and high hats (French soldiers wore hats with a flattened brim in front and back) do not support such view.

The civilians witnessing the execution appear to be neutral, participating in neither invasion or in the uprising making them innocent. However in realty these men are treacherous individuals who benefited from being Spaniards but refused to help the motherland. Now come the cowards to witness the death of the Spanish heroes. The guilt in these weaklings is constant and as a result they cannot make direct eye contact with the condemned men or the soldiers one of them looks at the event through a hesitant side glance while the others have covered their eyes with shame.

Finally Goya the great Spanish painter focuses the lone lantern on the people who are dead or would be dead shortly. Therefore it would be reasonable if we conclude the analysis of this painting is death and the horror.

The analyses of these two art pieces are important to realise and show the emphasis of the world in which we live in and the comments artist intends on showing about it.

"Guernica" by Picasso and The "Third of May" by Goya. (2016, Jul 25). Retrieved from https://studymoose.com/guernica-by-picasso-and-the-third-of-may-by-goya-essay 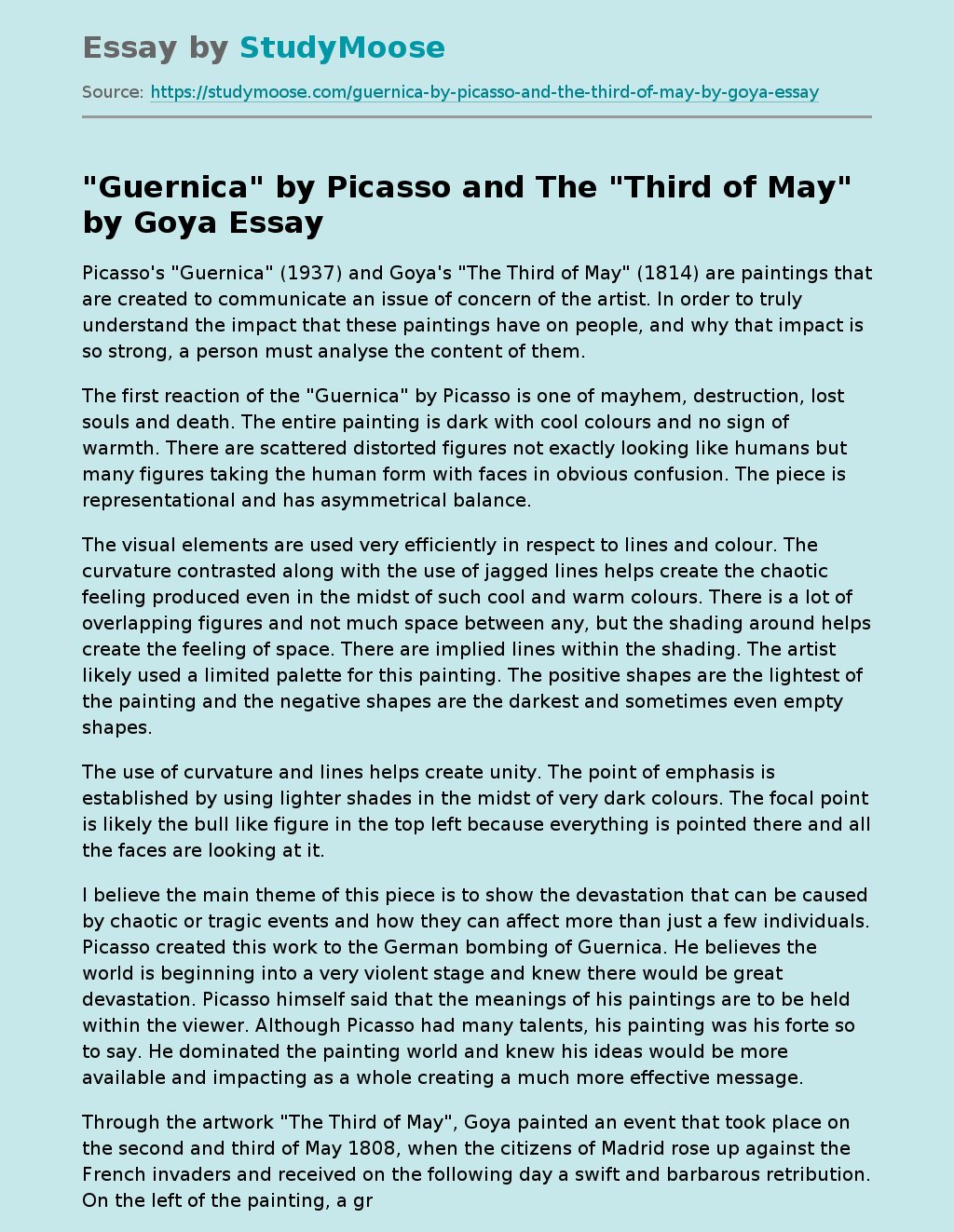