When considering the painting “Guernica” by Pablo Picasso we must first consider why the piece meets the criteria of an actual work of art.

First, we define wether the piece was made by an artist and why this artist is accredited. This painting was done by Picasso, one of the most renowned painters of his time. When mentioning the art of painting, Picasso is the first name that comes to the forefront of many minds. All artists and people alike recognized and continue to recognize Picasso’s work as art because of how influential and and shaping it was on his generation.

Don't use plagiarized sources. Get your custom essay on
“ “Guernica” by Pablo Picasso Art Critique ”
Get custom paper
NEW! smart matching with writer

Now we must decipher whether this piece was intended to be a work of art. Through research we see that Picasso wanted to make a political statement with this painting. There was much thought and preparation that went into the making of this work of art.

The real world relevance and the preparation show that the piece was obviously intended to be a work of art. As we move to the descriptive criticism we must look at how the work is physically put together and how it is unified as a whole. “Guernica” is full of many exaggerated and unique shapes. Looking closely we see the painting is made up of layers. The bottom layer is full of very large basic shapes such as rectangles and triangles, while upper layers show more unique and defined drawings. Many drawings are distorted and in areas very exaggerated. The work is unified through its basic grayscale colors across the entire painting and also through the previously stated, consistent and distorted nature of all the objects.

As we look at the organization of this painting it may seem that it has none, but looking deeper we see that every piece of the puzzle has its place. “Guernica” is very balanced in its structure, the painting is not “leaning” to the left or the right.

It is obvious that Picasso was very careful about the placement of the objects and shapes in the painting. Finally, when descriptively criticizing a work of art it is important to discuss the detail and also the structural relationships of the piece. The detail of Picasso’s work is found in the obscure and unique lines used throughout the painting. Also, we find many “hidden” images in this painting, many things you would not see by merely glancing at the work. Structurally the painting is formed by layers and many overlapping shapes. The overlapping shapes are what bring the work together and make it appear completely fluent across the entire piece. Although “Guernica” does have many intricate designs and unique amenities we could describe the paintings form, overall, as chaotic and distorted. When interpretively criticizing this painting we focus on the content. We will attempt to define the identity of and the meaning behind the work.

Not only is “Guernica” Pablo Picasso’s most famous work but also his most powerful. Painted as an immediate reaction to the Nazi’s devastating casual bombing practice on the small town of Guernica during the Spanish Civil War this painting makes a very bold political statement. The painting reveals the tragedies of war and the physical and emotional toll it took on individuals, particularly innocent civilians. We must also consider what the work of art reveals about the subject matter or form. The chaotic nature of the painting reveals the chaos and disorder of the actual event. Also, we see pained faces on every figure represented in the painting showing the emotional and physical suffering that was inflicted on these civilians. Picasso did a wonderful job of connecting the form and content of this piece, this being one of the many reasons it is such an admired work of art.

While interpreting “Guernica” we must also dig deeper into what the artist was trying to convey through the artistic form. Picasso not only wanted to depict the horror of the bombing of Guernica but publicly display his own outrage toward the happening. Picasso had a personal and emotional connection to the people of Guernica considering his birth in Spain. The painting was a way of expressing his feelings toward the situation and also representing the feelings of those affected by the bombing. In the interpretive criticism of “Guernica” we find an overall representation of Picasso’s thoughts toward the horrible event that happened in this small spanish town, depicting the heartlessness of and devastation caused by the Nazi bombing. As we move to the evaluative criticism of this piece we will be focusing on its worth, what the merits of the work are, what it amounts to, and why it is valuable. “Guernica” is one of the most famous and influential paintings to ever be brushed onto canvas.

The painting is not only aesthetically beautiful but has meaning and effects the emotions of people everywhere. “Guernica” was originally exhibited in July 1937 at the Spanish Pavilion at the Paris International Exposition. After the Paris Exhibition the painting went on tour and has traveled around the world since its completion in 1937. We see by the international touring of the painting its worth to society. But where we find the true value in “Guernica” is in its becoming a universal and powerful symbol warning humanity against the suffering and devastation of war. Moreover, the fact that there are no obvious references to the specific attack the painting has contributed to making its message universal and timeless. Picasso truly made an inexhaustible impact on society through the painting of “Guernica” one that will last for many generations to come. 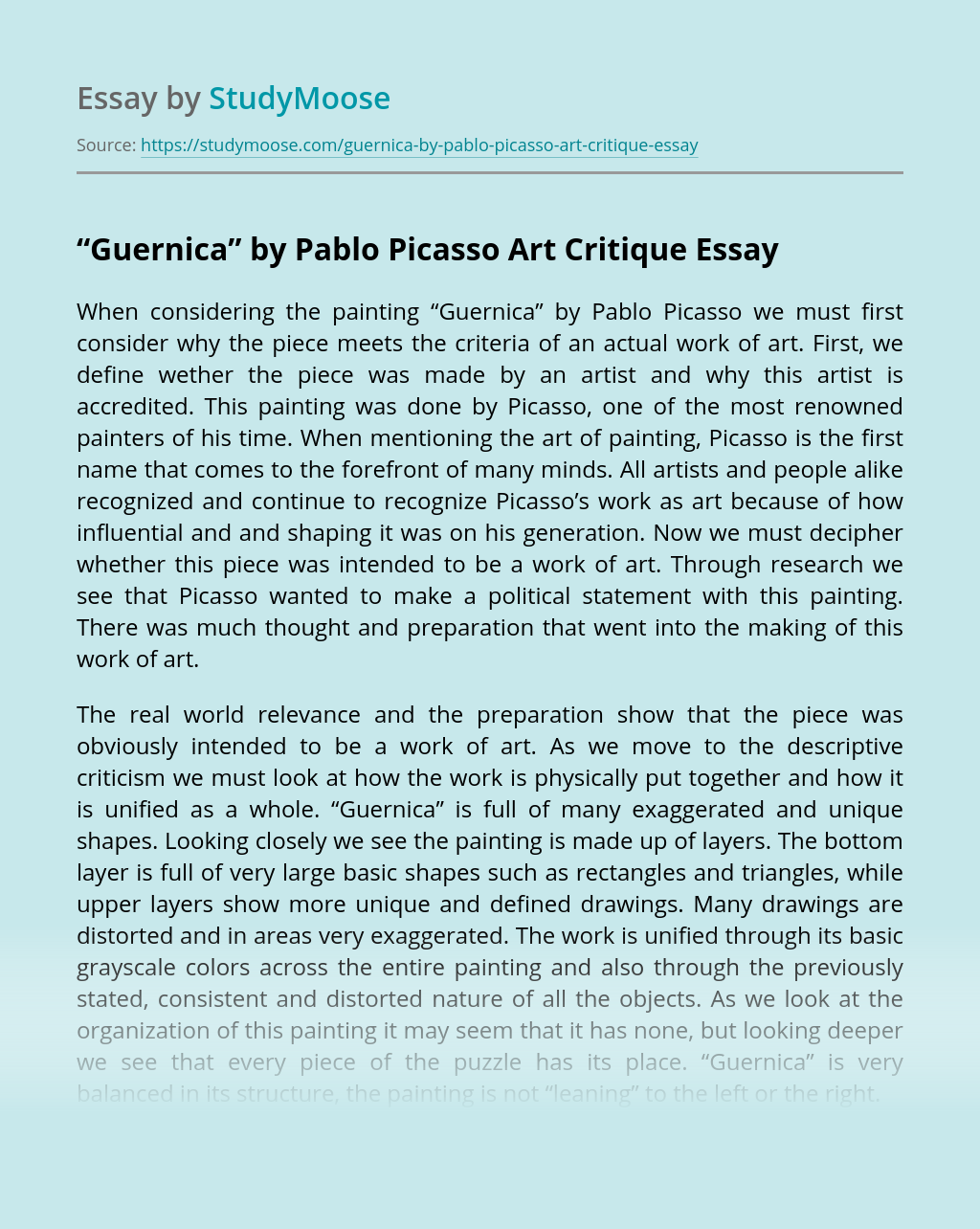