"The weeping woman" by Picasso

The weeping woman portrays a woman who is in deep despair. Throughout the painting, we are able to see quite a lot of sharp edges and contrasting colours. The woman’s black piercing eyes are wide-opened, her tears running down in clear drops, and she is biting a handkerchief which she grips tightly in her hands. Placed on the top of her head is a black, yellow and red hat with a blue flower on top. Her shattered image reminds us almost of a broken mirror and her distressed face enables us to see the pure emotions this lady is feeling.

The painting seems resemble an expression that we refer to today as “break down.”

With his unusual and expressive style, Picasso was able to express complex emotions such as grief, outrage, terror, etc. that we as viewers are able to relate to.

Throughout the painting weeping woman, there are lines and shapes that viewers eyes are instantly draw to. This is because they stand out from the rest of the painting.

Almost all of the lines are thick with a heavy outline making the woman emotions very clear. The thick lines emphasise her emotions of the woman very well and almost tell the viewers that Picasso was very sure in the way he has painted this picture. The women’s facial expressions are emphasised by the great contrast between the large shapes and smaller shapes. For example the hair which is outlined with thick bold, wavy lines, that instantly gives the painting texture.

In this particular painting, the colours are very bold and bright, which is strange as most people would associate dark, dull colours like greys and blacks with misery and grief, but Picasso used these certain colours for a good reason. By doing this Picasso makes us think that the woman was happy and confident right up until the moment when she received some tragic news. It was this moment that Picasso cleverly captured in his painting.

Picasso was a well-known artist that used the style cubism in his paintings. Through the use of this style Picasso studied the basic geometry of objects and the idea of seeing the same object from a number of different viewpoints at the same time.

What I love about this painting is the fact that he uses many different shapes to display the raw emotions of this weeping woman. With the use of the bright colours Picasso has mange to capture the exact moment right before the woman hears the tragic news. The only thing that I dislike in this painting is the jaw and the hand holding the handkerchief. I find it really hard to make out that they are actually hands and a jaw as the colours and lines don’t quite match up.

The painting “Water Lilies” by Claude Monet was painted with mainly unblended, visible brush stroke of relatively the same size. Only a couple of the many brushstrokes in this painting are thinner. This makes us come to believe that Monet used only a limited variety of brush sizes; however these brushstrokes do have varying lengths and directions of movement.

The colours portrayed in this painting convey perfectly to each element in it. The primary colours are the main colours which make up the painting but Monet has added other colours such as pink. The use of the colour blue instantly suggests that there is water in the painting and the use of the colour green makes it easier to see the difference between the water lilies and the leaves otherwise this painting would just look like water with colourful dobs of paint on the surface. He colours pink and red in the flowers, tells me that there is a pond with interesting flowers to look at and that one should not expect just one kind of them. Monet painted his own interpretation of what he saw not what many people would of expected in a painting.

In this painting, Monet portrays a large pond filled with many large clumps of colourful water lilies placed on the surface of the pond. The pond itself is surrounded by small amounts of green vegetation. The clear blue sky and clouds are easily seen through the trees but are also reflected by the ponds water. The tall grasses, reeds and other vegetation are also reflected.

Monet instead of in his earliest of paintings, where he used a traditional composition with the bridge, and a point of view in which the viewer would be standing at the edge of the pond looking out towards the surface of the water, he just painted the waterlilies and their reflection in the water. He did not paint a horizon; therefore it would seem the viewer would be almost floating over the pond, seeing the sky reflected on the water as well as the depths of the water.

Monet was an impressionist artist, meaning he captures the image of an object as someone would see it if they just caught a glimpse of it, therefore o me this painting is semi realistic. Although having some of the key features the actual picture in real life, there are still some elements in the painting that look a bit unrealistic, such as the flowers. The flowers although you can kind of tell they are flowers, still don’t resemble the realistic shape of a normal water lily; the same applies to the reflection of the vegetation in the water.

When I look at this painting my eyes are drawn straight away to the beautiful water lilies on the surface of the water. Their bright vibrant colours really stand out well against the blue of the water. I found it clever how he mange to incorporate the reflection of the sky and clouds into the painting as well. The one thing I don’t like about this painting in the types of brush strokes he used. I believe this makes it harder to interpret the painting as the colours are unevenly blended.

Starry night by Vincent van Gogh is one of the most well-known paintings in today’s modern society. Although being the only piece of work van Gogh sold throughout his artistic career starry night has risen to the peak of artistic achievements.

The first thing I notice when I look at starry night is the beautiful night sky, which takes up most of the background. Its whirling, curving lines seem to be whooshing across the background in this gentle, wavy motion and then appear to meet at the centre to form this spiral-like formation. Eleven bright yellow stars that look like huge fireballs light up this whole piece and create an excellent contrast with the cool blue, fluid night sky that is made up of many shades of both blue and grey. There is also a large crescent moon in the top right-hand corner that is made up of a more orange, brighter light from the rest of the stars.

In the middle ground there are small houses which are discreetly painted in the bottom right corner of the painting and blend in quite well with the forest and mountains. The structure of the village is old-fashioned and plain. No light shines in the village, giving the viewer the impression that everyone there is probably asleep.

Finally in the foreground there is a large cypress bush. Made up of dark greens and blacks it gives us a feeling of an even greater sense of size and isolation. The curving lines reflect that of the sky and therefore give the painting a sense of depth.

Van Gogh uses a variety of white and yellows in the night sky, creating a spiral effect which draws attention to the sky itself. Vertical lines for example the church tower and cypress tree gently break up the structure with drawing away from the dominant night sky.

Vincent van Gogh also uses many shades of blues and greens with small touches of mint to show the detailed reflection of the moon. The houses placed in the centre of the painting are tiny blocks or both yellows oranges and greens with small brush strokes of red mainly in the church. The dominance of blue in Starry Night is balanced by the orange of the night sky elements.

The brush strokes in starry night are one of a kind. The thick brush strokes stand out, and it is quite possible that van Gogh’s frequent attacks further dramatized his brush work. Despite this there is consistency in his technique which adds even more depth and emotion as well as texture to the painting.

Starry night is an excellent example of a Post-Impressionist painting. As the image although containing recognisable shapes and scenes these images don’t look exactly how they would in real life.

"The weeping woman" by Picasso. (2016, Aug 14). Retrieved from http://studymoose.com/the-weeping-woman-by-picasso-essay 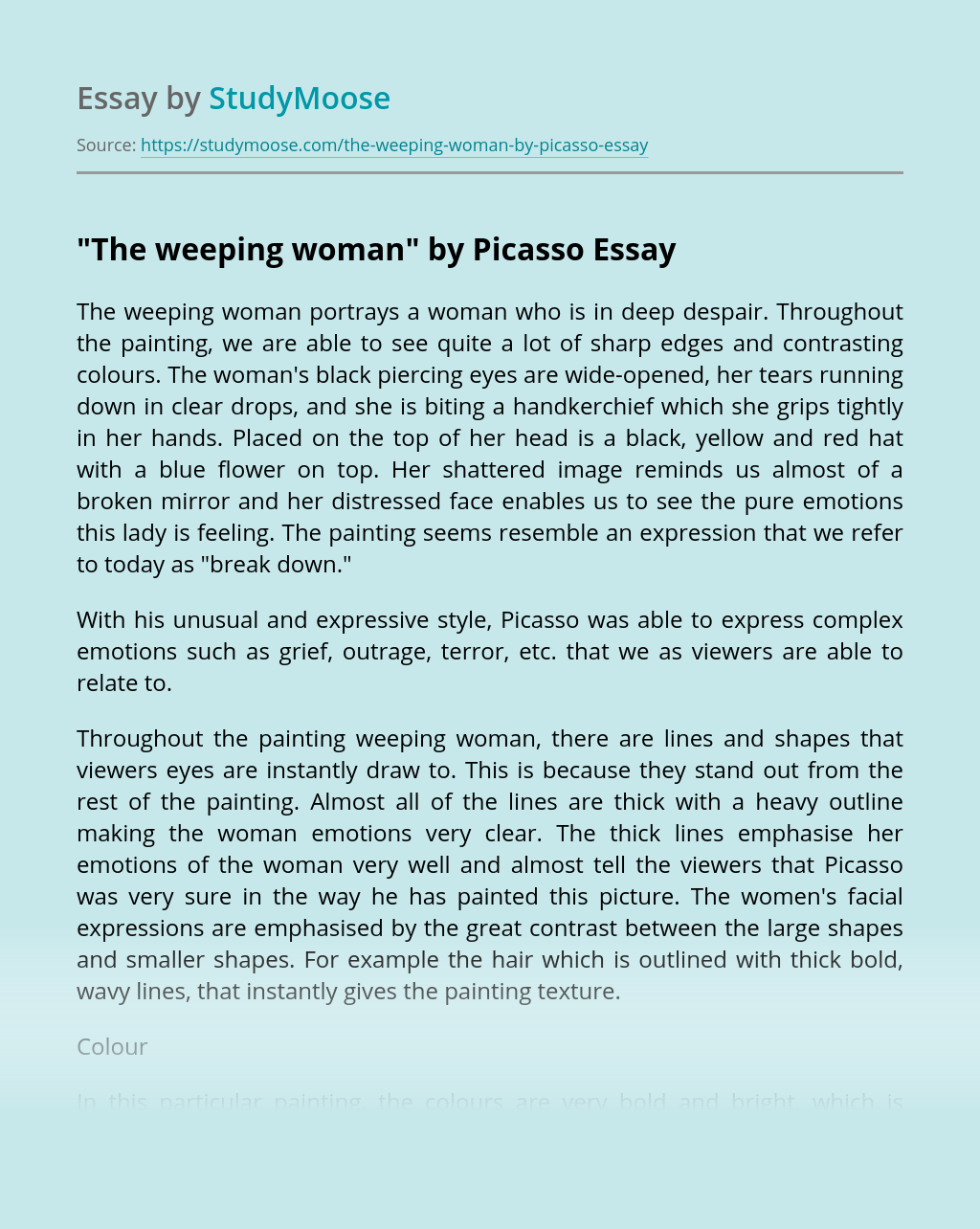 Don’t waste time
Get a verified writer to help you with “The weeping woman” by Picasso
Hire verified writer
$35.80 for a 2-page paper
Stay Safe, Stay Original