In 1907, Pablo Picasso and Georges Braque founded the art movement known as Cubism. This style of painting revolutionised modern abstract art during the 20th century. Pablo Picasso was a Spanish Painter who was born in the 19th Century. His talents were recognised at an early age for his realistic technique. During his adolescence his painting style changed drastically as he experimented with different theories, techniques and ideas. Picasso is best known for the founding of Cubism with Georges Barque. Picasso thought, “Paintings are flat, sculptures are 3-dimensional.

Don't use plagiarized sources. Get your custom essay on
“ Pablo Picasso ‘Girl with a Mandolin’- Cubism Movment ”
Get custom paper
NEW! smart matching with writer

Why cannot paintings be made to see things from different directions?” His dissatisfaction with the direction of his art lead him to draw inspiration from French painter Paul Cezanne. Cezanne took simple forms and attempted to develop better ways of presenting them using colours and shapes to create a harmonious depiction.

Picasso drew inspiration and unlike Cezanne he didn’t use the simplified shapes and sharp lines to add depth but to break down the subject into other geometric forms.

Picasso wanted to construct an image rather than represent it, like his influence Paul Cenzanne. In a representation the artist takes what they see and paints it on canvas. Picasso reconstructs the subject with different segments that allow his viewers to see all angles of his subject. Picasso’s ideas and influences lead him to approach art in a new style now known as the Cubism movement. Cubist paintings were not meant to be realistic or life-like in any way, instead they revolutionised conventional still life; landscape; and portrait paintings through their abstract ideas and artworks.

Analytic Cubism is one of the two phases within Cubism and was developed between 1908 and 1912. The distinction between Synthetic Cubism and Analytic Cubism was that Analytic Cubists analyse the subjects form and re-constructs the subject with geometric shapes. Colour was almost absent from these paintings except for the use of dull colours that often included grey, blue and brown.

After looking at the subject from every possible angle a Cubist artist pieces together fragments from different viewpoints simultaneously on to one painting. The fractured, geometric forms; muted colours; and undefined edges of their subject are what characterises Analytic Cubist artworks. Analytic Cubist artist made use of the basic shapes: pyramids, cubes, spheres, cylinders, and cones to represent the natural world. Art critics originally used the term Cubism as an insult to their simplistic designs. The brushwork in some Analytic Cubist paintings showed the contrast between the light and darker tones. This does not apply to all Analytic Cubist paintings as some used similar tones of colour to create a more unified surface on the painting. Synthetic Cubism was the later phase within Cubism that looked at the experimental nature of collage.

Synthetic Cubism was developed between 1912 and 1919, it was composed of different textures, surfaces, collage elements and a large variety of merged subject matter this is what characterises Synthetic Cubism. These new approaches to Cubism allow Cubist artist to reconstruct their subject differently through the Analytical and Synthetic cubist styles. Many Cubist artists paint subjects relevant to their everyday world (natural or man-made). They focused their paintings on simple human subjects, landscapes and towns, however the dominant subject used in Cubist paintings was still-life. These subjects were also found to be used in many new styles of modernistic art movements however they have been constructed differently in each movement. Picasso used these subjects as his focus for his Cubism paintings.

Many artist followed the Cubist movement, influenced by the new style of painting the looked at the simplified geometric forms of everyday life. Some Cubist paintings are; Glass of Beer and Playing Cards by Juan Gris; Guernica by Pablo Picasso; Improvisation by Andrew Dasburg; and many others. One artwork in particular is Pablo Picasso’s ‘Girl with a Mandolin’. The ‘Girl with a Mandolin’ was painted in Paris, 1910. It was a part of the Cubist movement, an artwork created by Pablo Picasso. The artwork is an oil on canvas painting. It was one of Picasso’s early Analytic Cubist creations. Picasso’s ideas lead him to paint the subject as she sat directly in front of him, facing him. He looked at his subject and analysed her, breaking her down into many different squares, cubes, rectangles, and other geometric shapes. He arranged these shapes to show different parts of her that would otherwise be impossible to see from one point of view, this is what defines an Analytic Cubist painting. Pablo Picasso was greatly influenced by his surroundings.

This led him to paint everyday life in his area. Unlike traditional western paintings before impressionism, who painted historical subjects, posed to create a pyramid of vector lines that lead to a central focal point of the painting. This new approach to representing his subject allowed him to use abstract geometric shapes to reconstruct the subject. The colours in this painting are shades of brown, yellow, and green. They all seem close to each other in colour, and are all muted or dull. No bright colour stands out. The entire surface of the painting seems unified due to the colours Picasso has used. In traditional Western paintings painters would use a wide array of deep colours that were not limited to dull browns, yellows and greens of this painting. Traditional paintings would use realistic colours to represent their subjects.

Picasso painted the background behind the girl with a random pattern of squares, cubes, rectangles and other geometric shapes. It shows nothing recognisable. The background was painted the same way as the subject, it’s unspecific as to what shapes and forms are meant to be the girl and what forms are meant to be the background. However, it is possible to identify some of the subject as she is painted in slightly lighter tones compared to the background. These lighter tones allow the viewer to identify the subject as she is surrounded by the duller colours.

Also it is easy to identify the mandolin due to its oval shape and curved lines against the straight lines and geometric forms that accompany the piece. The Cubism movement revolutionised conventional ideas of painting. It opened the door to new styles and artworks such as Pablo Picasso’s ‘Girl with a Mandolin.’ The geometric forms and sharp edges of these artworks characterise a Cubist painting. Picasso’s and Baroque’s idea was to construct and object rather than represent it helped form the modernistic art we know today. 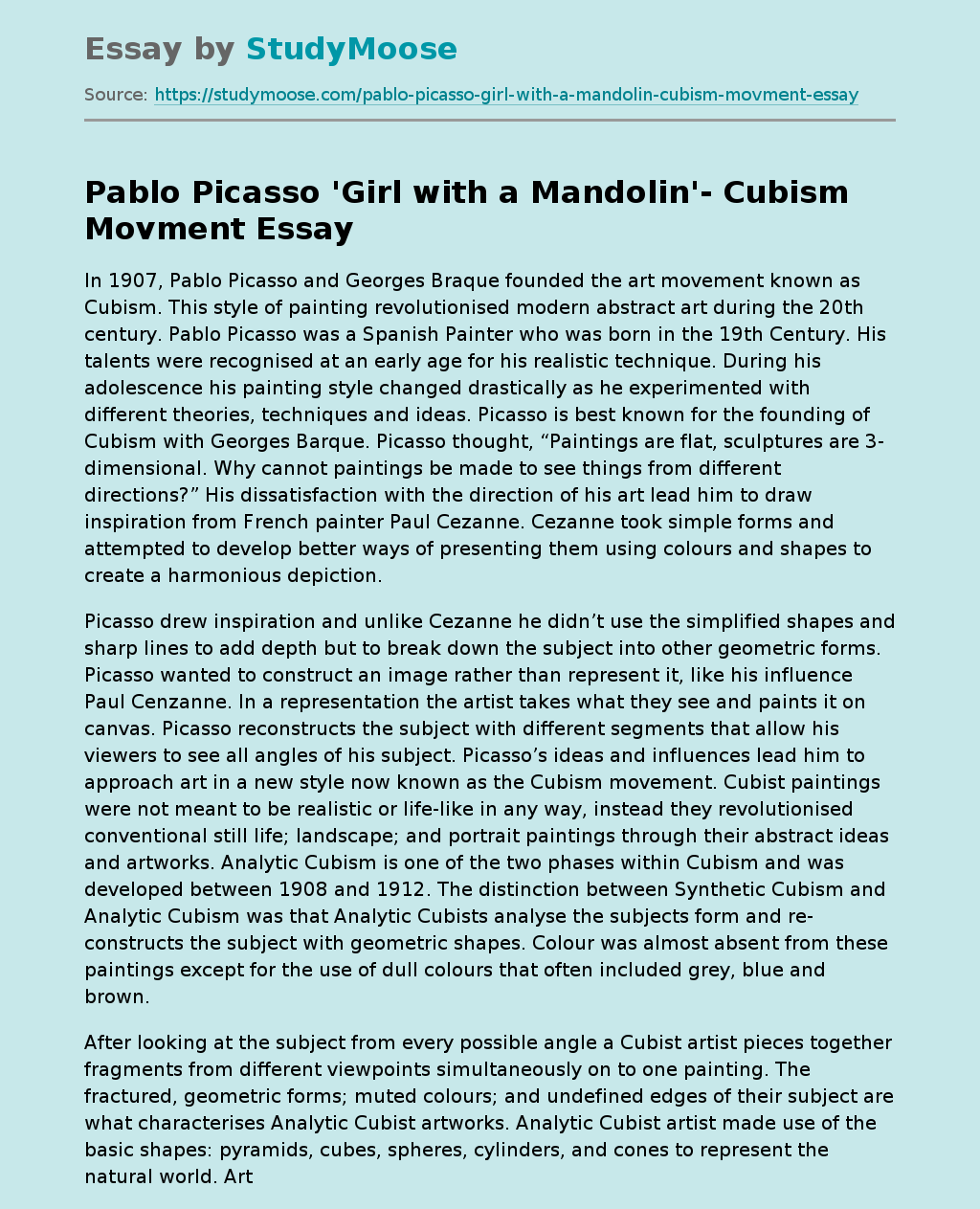