“Guernica” is one of the most well-known paintings in the world. It was painted by Pablo Picasso in 1937. The painting itself measures 11ftx 26. 5ft. “Guernica” depicts the bombing of the Spanish town of Guernica during the Spanish civil war. The whole thing is done in a cubist style not surprising since Picasso is known for his cubism. In the painting there are people and animals alike all of them in pain and or suffering. “Guernica” is also filled with symbolism that Picasso incorporated into it, and hidden messages.

Don't use plagiarized sources. Get your custom essay on
“ Pablo Picasso’s ‘Guernica’ ”
Get custom paper
NEW! smart matching with writer

The painting is also colorless it only uses black, white and, gray.

Picasso used several principle and element of art while painting “Guernica”. Some of the elements include value, line, shape, color and, space. The value in the painting creates the form. The line in the piece divides the images. The images in the painting are made using shape. The color is limited using only black, white and, gray. Space is incorporated because everything in the painting is cramped and in one room.

Some of the principals in “Guernica” are emphasis, balance, movement and, contrast. The emphasis is on the damage war causes to not just people but animals as well. The balance in the piece is asymmetrical.

There is also implied movement throughout the entire piece as well as, contrast between the light and darks. At first glance “Guernica” looks like just a standard cubist painting but once you examine it a little further you see the point Picasso was trying to get across.

The message Picasso stresses the most in “Guernica” is the damage of war. You can see this through the pain and agony on the face of the people and animals in the piece as well as the destruction all around. Besides this there are also two perceptions of hope. There is lost hope which is symbolized by the evil eye and the light of evil.

The other hope is the conventional one this is shown through the light of good, dove in the background and, a lone flower that survived the destruction. Some hidden messages in the painting are such things like hidden harlequins which represent survival and bulls which symbolize strength and male fertility. A very simple painting at first glance but after a little analysis proves to be very complex. My opinion on “Guernica” is very shaking it is an extravagant piece but does have some drawbacks on it. Some things that make this piece so good is the multitude of messages especially hidden ones.

I’m also marveled at the thought and sophistication that went into making this. Picasso was definitely in my opinion one of the most intelligent artists there ever was. Some things that bring this piece down would be the cubist style. I do enjoy cubism but (going on to another drawback) it doesn’t fit with everything going on in the painting. It is too cramped for that style and this adds to the already menacing task of deciphering the painting. One last thing is Picasso’s lack of clarification it would definitely helped a little. All in all Guernica is definitely a great piece.

Abraham Lincoln was said “Probably, no nation is rich enough to pay for both war and civilization, we must make our choice we cannot have both. ” Lincoln was clearly right. As shown in “Guernica” the Spanish chose war and therefore sacrificed their civilization in the process. They subjected their inhabitants to death and destruction that could have been avoided, but that’s what war does. It takes lives and destroys everything in its path but even through war things survive just like the harlequins spread throughout the piece. This something Picasso understood and showed in “Guernica”. 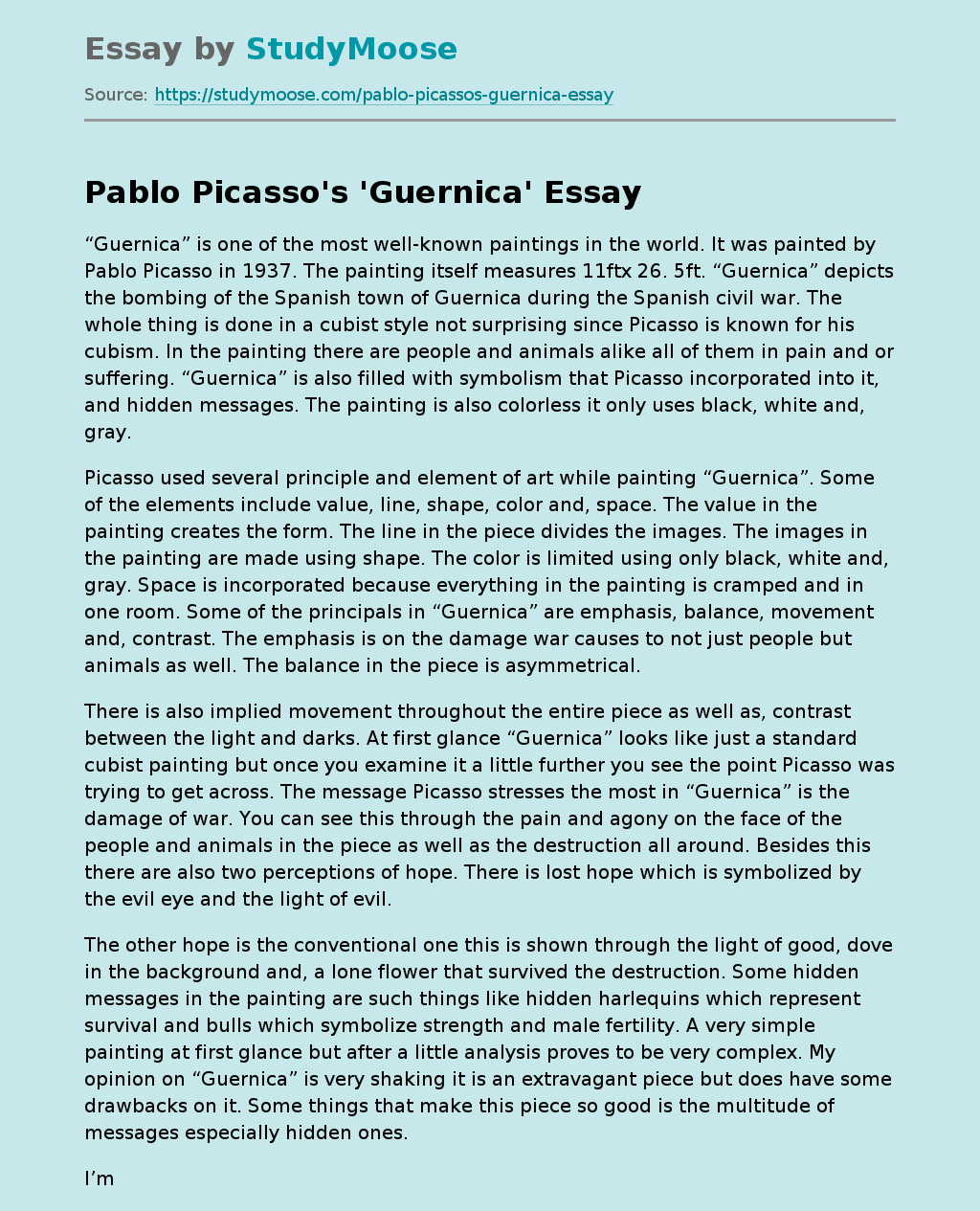