In the past decade there has been a rise of obesity in children. I believe along with many credible sources that a lot of the reoccurring obesity problems we face with children have to do with fast food. You could almost say that fast food is kind of like a drug for kids. It is always fun to go out to eat as well as take in food that is high in calories and saturated fat. Although fast food may be a large factor in childhood obesity, it is also safe to say that it’s not the only factor.

Don't use plagiarized sources. Get your custom essay on
“ Fast Food and Childhood Obesity ”
Get custom paper
NEW! smart matching with writer

Are we placing too much blame on the fast food industry for making our kids obese, or is it our fault as parents and caregivers? Fast Food Then and Now Compared to how fast food chains functioned when they first opened and how they operate now you will see a huge difference; not only in their food selection but also in the portion sizes.

For example, when McDonald’s first opened in 1955 their cheeseburger was only 1. 6 ounces and now you can get a cheeseburger for almost 8 ounces (Monte, 2008). The sizes are almost a 400 calorie increase—400 calories could be more than one whole meal for a child.

Every year portion sizes are essentially getting larger and larger. A small now would have been a medium just five years ago (White, n. d. ). Not only have the portion sizes gotten larger but so has the menu. Fast food chains now have been offering smoothies, sundaes, pie slices, and even cinnamon rolls.

They offer more menu options that offer more calories and saturated fats. Along with these they have also gotten better with offering some healthy options too like apples and low fat milk, but who goes to a fast food restaurant to get apples and milk?

There are 3,039 possible kids’ meal combinations and out of that only 12 combinations meet the nutrition criteria for preschooler’s and 15 for all other children (Oren & Dodson, 2010). The only kind of company who would essentially poison children like that is ones who are trying to make a fast buck and that is the goal for all of these fast food companies. They don’t realize or they do and just don’t care that they are poisoning our youth and even adults. Advertisements For the past ten years or so fast food chains have been advertising to children.

Kids spend more time watching TV than any other activity they do besides sleeping (Nestle, 2006). Fast food chains have taken advantage of this by placing most of their ads on programs like Nickelodeon, Disney, and even PBS. They know that if they spend millions on advertising on children networks that they will get their return on investing in them. Children see more than 32% more fast food ads on TV now than in 2003 (Oren & Dodson, 2010). In 2009, McDonald’s spent the most out of all the fast food companies on advertising to children.

They spent almost 900 million dollars targeting ages 6-11. Subways was in a very far out second spending a little over 400 million dollars targeting 12-17 year olds (Harris, Schwartz & Brownell, 2010). Studies have also shown that Hispanics and African American children see more than 50% more fast food ads than white children (Oren & Dodson, 2010). With this there are more fast food chains in African American and Hispanic dominated neighborhoods. Family Statistics You can probably assume that every family in the U. S. goes to fast food restaurants on occasion but some go more than others.

Studies have shown that families with lesser income are more exposed to fast food than other families who have a higher income (Block & Scribner, 2004). With the economy the way it is, much more people are making much less and this is causing more and more families to visit fast food places rather than eating at home. You can go to a fast food joint and spend ten dollars for the whole family to eat rather than spending hundreds of dollars at a grocery store. In an article I just read, less than one third of Americans are eating their meals from scratch; meaning actually cooking and serving them to their families (Voigts, 2005).

This was published seven years ago—just think of where we are now! I conducted an interview with my sister, Morgan Dutton, who is an extreme fitness guru, health nut, and she also has children. I asked her what she thought about this obesity epidemic in our youth and she said, “I cannot believe all of the staggering statistics regarding kids and fast food. I am not sure why parents wouldn’t want their kids eating the healthiest food option rather than the fastest. Kids are starting to get diabetes earlier and it reduces their life span by years.

Fast food is essentially killing our kids, it may be slowly but it is happening (personal communication, October 15th, 2012). ” Drawing the Line So whose fault is it that our children’s generation is getting more and more obese? Should we blame it on fast food—when can we blame ourselves? As a parent I want my child to live the longest healthiest life they can live and when I take them to places like McDonald’s and Burger King I am basically poisoning their body. It may be fast food that is making them obese but isn’t it our fault for taking them there in the first place?

Exposing them to that kind of food especially early on in their life is only going to make it harder for them when they get older and can make their own decisions. Conclusion Rather than placing blame for the obesity problem with our children maybe we should be taking action. You could blame fast food chains for making your kid obese or you could even blame yourself because you took them there. Parent’s need to start making better decisions on what they are putting in their kids bodies because they may outlive their own child.

There are so many chemicals and toxins in fast food that people are not aware of. Fast food may be cheap and it may be fast but in the long scheme of things, it is killing our kids. 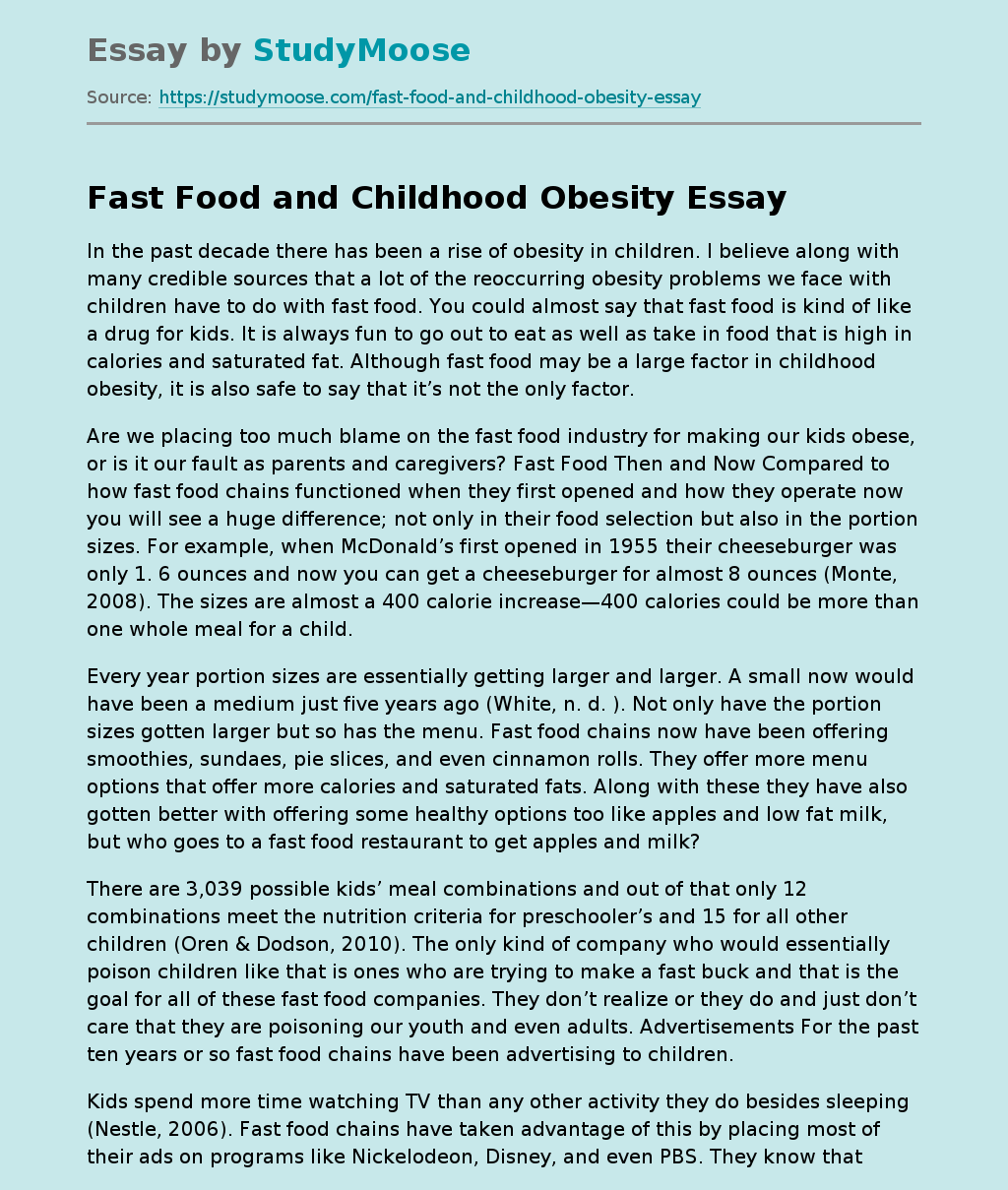