Where will we be without them? There are at least one found in each home. Some people would actually do anything to get on it, while others believe that some of them are a bad influence to young people… Still wondering what it is? The one and only program sent from the highest heaven to bring laughter to a number of people with all it’s bleeped out swear words and demented attention across the world. Yes that’s right, the amazing, and unique, extraordinary reality television.

Don't use plagiarized sources. Get your custom essay on
“ Does Reality TV really portray reality? ”
Get custom paper
NEW! smart matching with writer

These shows have taken over our lives, from X-Factor to American Idol, some of them had the most bizarre names found in history for example, ‘Get A Life’ or ‘Dog Eat Dog’. The reason for this is because the producers try to get attention for these shows by creating these names to make it stand out from the rest, so people would watch it which will give them more viewers. TV companies enjoy reality shows because not only do they get paid a lot but they are cheaper to produce and they captivate a lot of younger viewers along their journey which advertisers admire, and so adding more money throughout their process.

At least 96% of people in the UK watch reality TV, and one third of them are teenagers who are spending more than 4 hours a day watching these shows. Some people would compare this devious creation to a ‘devil’ as these naive children are being possessed and controlled by it turning them into an addict.

Considering they are ‘naive’ they would get influenced by some of these people/celebrities that seem to appear in the shows and want to be just like them. This would lead these children’s to something that is totally opposite to the way they are.

They would change the way they dress, behave, cause a lot of violence, or worst of all take drugs, and many other reasons just so they can ‘fit in’ or think that it is ‘cool’. Is this morally right? However like every coin have two sides, reality television is a great way for families to spend some time together, and fulfill their lives with joy as they gather round the TV waiting to be entertained and amused. Another reason why several people like watching reality TV because they are about real people in this world, which builds up their interest on what their background story is.

Why do you think that a lot of people watch talk shows, celebrity interviews, and celebrity gossips? It’s to find out about how their life is really like outside the cameras. This clearly proves that people want to be nosy and know how somebody else’s life is, it’s just human nature, and it’s a great way to kill boredom. Moreover, reality television shows are recorded live most of the time, so it leaves people with consequence as they will thrive to see the next part. Reality shows are being watched everywhere by everyone. I’m sure everyone’s heard of X-Factor… one of the most popular franchise talent shows in all of UK.

This show is very competitive, and involves a lot of criticism. Is that what life’s all about? Where little, lonely, lost souls surrender under the tips of Simon Cowell’s high heeled leather shoes begging for a chance in the spotlight just waiting for him to give a one word answer, ‘yes’; to make their ‘dream’ into reality as everything turns out to be very emotional at the end. There are over a thousand auditions played in this show from different cities all over the UK, although two thirds of these seem irrational and unorganized, almost like they were loaned money to act like such fools worldwide.

Or is it just to gain their 5-10 minutes fame to get public attention and money? Nearly everyone wants to appear on TV however some people take this into an extended step further, and go off-track, they would do whatever it takes to be on it, either making up a lugubrious background story, or stripping naked and X-Factor is one of the most popular shows in which you can accomplish this. As I’ve said before, most contestants do merge their way into the auditions with lies or exaggerate a bit too much hoping that the judges feel sympathetic towards them in order to get their way through.

Although Research shows that reality shows are scripted however when their not the directors encourage the participants to guide their conversations to a particular plot point. The famous singer Kylie Minogue and sister of one of the star judges from X-Factor had admitted that she much rather preferred the contestants being more real instead of taking instructions on the show. She clearly stated that there’s a ‘noticeable change [.. ] from the start of the live shows’. Apparently, they were a little ‘dorky’ in the previous years.

This suggests that all the work comes down to the editor, in other words, its reality… controlled by someone else? Are they, who they say they really are? Various amount of people changed their lifestyles after their X-Factor experience. For example Alexandra Burke auditioned for X-Factor at the age of 16 on 2005 although she did not go through after the judge’s houses stage because she was considered of being ‘too young’. Consequently, Burke came back three years later without giving up and tried again. Eventually Alexandra came down to the last two against JLS and won the show.

Therefore she gained a lot of fame and money and so got mesmerized by it till the point where she ‘forgot her own family’ claimed Burke’s mother, Mellisa Bell who is suffering an extremely bad kidney failures with Burke not giving enough support to her as a daughter. Mellisa continues to further explain about Alexandra’s behavior after the show; ‘she hasn’t given me a penny’. As a result of this, it seems that Alexandra was just taking instructions from the editors and not being herself during the series, and so she had shown her true colours when she left X-Factor, and appeared as a careless character especially towards her family.

In conclusion, despite the fact that reality television is an addictive source that gets you engaged into the program which helps you defeat boredom, and it’s a delightful way to get some time with your family on a Saturday night. It appears as though reality TV does not really portray reality. It all depends on how the producers/editors want things to work in order to get more viewers. As previously stated, with someone else there commanding or even taking control over you to do certain things, when in reality you do not have anyone giving you instructions on how to be yourself. You make your own decisions. 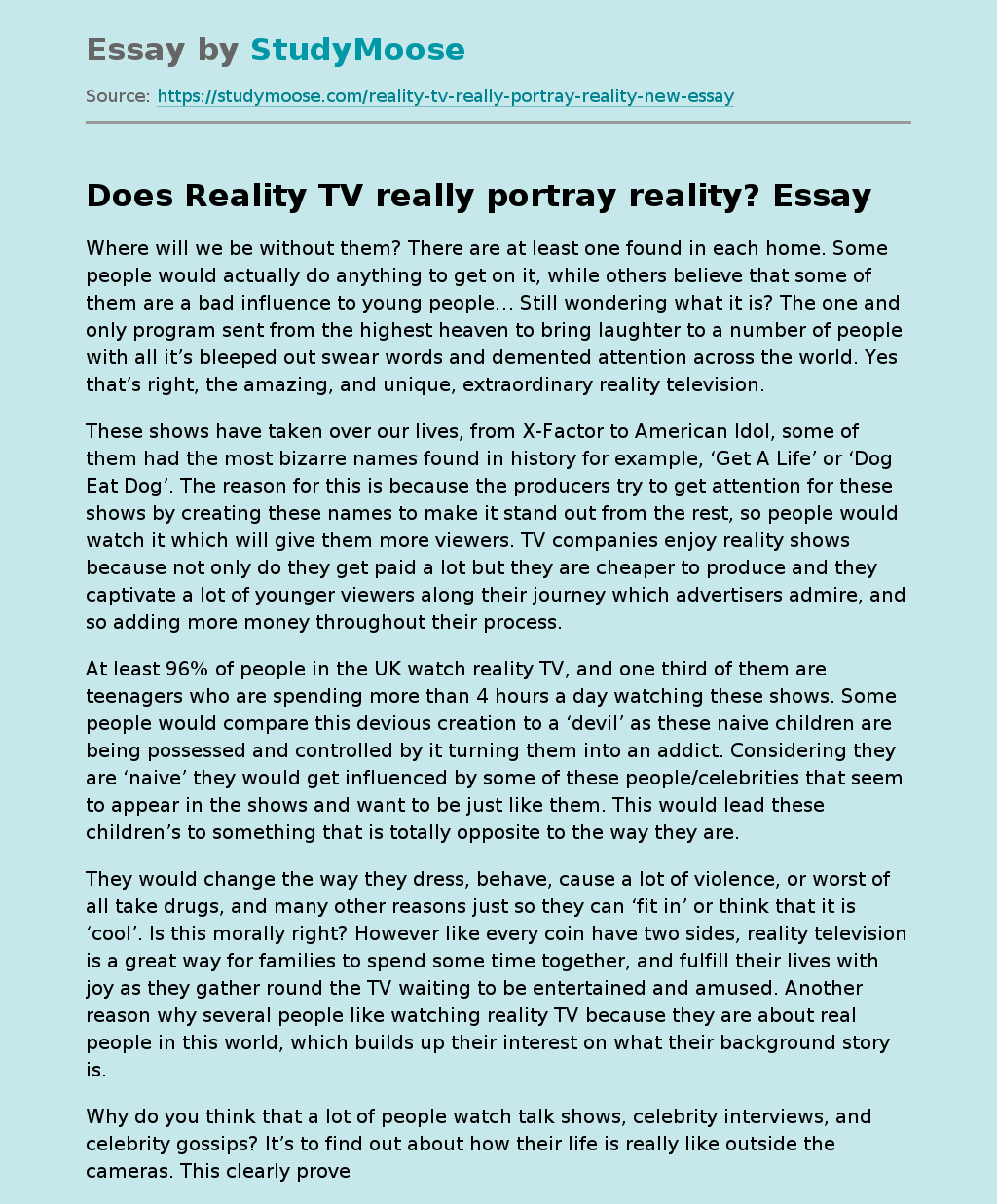