"The Lesson "by Toni Cade

The story “The Lesson,” by Toni Cade Bambara, is about a young girl named Sylvia who is accompanied by a group of her friends from her neighborhood and her elderly neighbor named Ms. Moore, who tries to teach all of them a lesson about life. “The Lesson” is a realistic story that takes place in the mid-20th century that exemplifies the true difference between upper and lower classes during that time period. Although Sylvia might come off as a mean and cocky little girl, you can tell at the end that there is something deeper to Sylvia when she begins to reflect on her day with Ms.

Don't use plagiarized sources. Get your custom essay on
“ “The Lesson “by Toni Cade ”
Get custom paper
NEW! smart matching with writer

Moore and actually seems to gain something out of the situation and you can tell just how much sharp of an observer she truly is. Throughout the entire story, it is clearly shown that Sylvia is a mean girl. Right when Ms. Moore is introduced at the beginning of the story, Sylvia describes how she feels about her.

Proficient in: The Lesson

“And we kinda hated her” (Bambara 60). She also says, “And I’m really hating this nappy head bitch” (Bambara 60). Although Ms. Moore is doing the children all a favor, Sylvia doesn’t seem to care and doesn’t even want to give her a chance.

Another example for when Sylvia shows just how mean she could be is right when she starts talking to Ms. Moore with all the other kids about money and about them going to the toy store, Sylvia mentions other things that she would rather be doing instead.

“And would much rather snatch Sugar and go to the Sunset and terrorize the West Indian kids and take their hair ribbons and their money too” (Bambara 61). Not only does Sylvia come across as a rude little girl towards her peers and to the people she actually knows, but to other random children.

She comes off as the neighborhood bully. Additional proof to show just how mean Sylvia can be is when she asks Ms. Moore why she brought all of them to the toy store. Ms. Moore just simply tells Sylvia that she sounds angry and wonders why she is mad. “I’m mad, but I won’t give her the satisfaction” (Bambara 64). Even when Ms. Moore just tries to see what is bothering Sylvia, she has an attitude. Although it was just a simple question, and Ms. Moore didn’t mean it in a mean way, Sylvia still has to come off as this rude little girl.

Even at the very beginning of “The Lesson,” you can already tell that Sylvia is a very cocky person. The author opens up the story showing a clear view of just how cocky Sylvia can be. “Everyone was old and stupid or young and foolish and me and Sugar were the only ones just right” (Bambara 60). Sylvia is implying that when it comes to her friends and everyone else she is surrounded by, she is ultimately better than them all. Sylvia’s close minded cocky attitude is also shown when Ms. Moore is discussing money with the children.

Sylvia acts as if she knows everything and Ms. Moore is ignorant for even bringing up such a simple subject about how money works. “And Miss Moore asking us if we know what money is, like, a bunch of retards” (Bambara 60). Considering Ms. Moore is trying to do the young children a favor and help teach them all useful things about life, Sylvia’s cocky attitude gets in the way of her retaining the true value out of what Ms. Moore has to say. More proof to show just how cocky Sylvia is, is at the very end of the story. After the day is done with Ms.

Moore, the children decide they are going to go to Hascombs and get cream soda’s. Sylvia’s cousin, Sugar asks her if she would like the race down there. “She can run if she want to and even run faster. But ain’t nobody gonna beat me at nuthin” (Bambara 65). Considering everything she had just gone through and getting a reality check about life, Sylvia is still so convinced that she is the best. This shows just how much confidence she truly has in herself but at the same time her high level of confidence is easily mistaken for cockiness.

Although Sylvia’s attitude often gets the best of her and she seems to be just a rude little girl, at the very end of the story you can tell that there is much more to her than you might think. You can get a better understanding of just how sharp of a girl she truly is after the day with Ms. Moore comes to an end. When the children all decide to go get cream soda’s at Hascomb’s, Sylvia decides to not join in with the rest of them. You can tell she has a lot going through her mind after getting a taste of reality by Ms. Moore.

“I’m going to the West End and then over to the Drive to think this day through” (Bambara 65). You can assume that although Sylvia is too stubborn to admit that she has actually gotten something out of that day, she keeps to herself and decides to reflect on what she had been introduced. Another time that Sylvia seems to let her guard down and kind of shows how she is observant to her surroundings is when she is about to walk into the toy store. She doesn’t understand what the big deal is about going inside but at the same time she just doesn’t feel comfortable about going in.

“But I feel funny, shame” (Bambara 63). At this point Sylvia begins to realize that there is something to this trip to the toy store. For a second she doesn’t feel as cocky and is almost insecure with herself to where she can’t bring herself enough courage to just walk into the toy store. It seems that Ms. Moore’s lesson does actually affect Sylvia in the long run. She lets her mean, cocky demeanor down just long enough to show the reader that she actually did get something out of that day.

Considering the fact that she does only have that brief second of where you see her whole attitude change, you can understand just how set in her ways she truly is. From coming off as a rude little girl throughout the entire story and then all of a sudden for that short time you get to see her actually take what she saw into consideration, you can get a better idea that there is more to Sylvia than what is illustrated to the reader throughout the duration of the story. 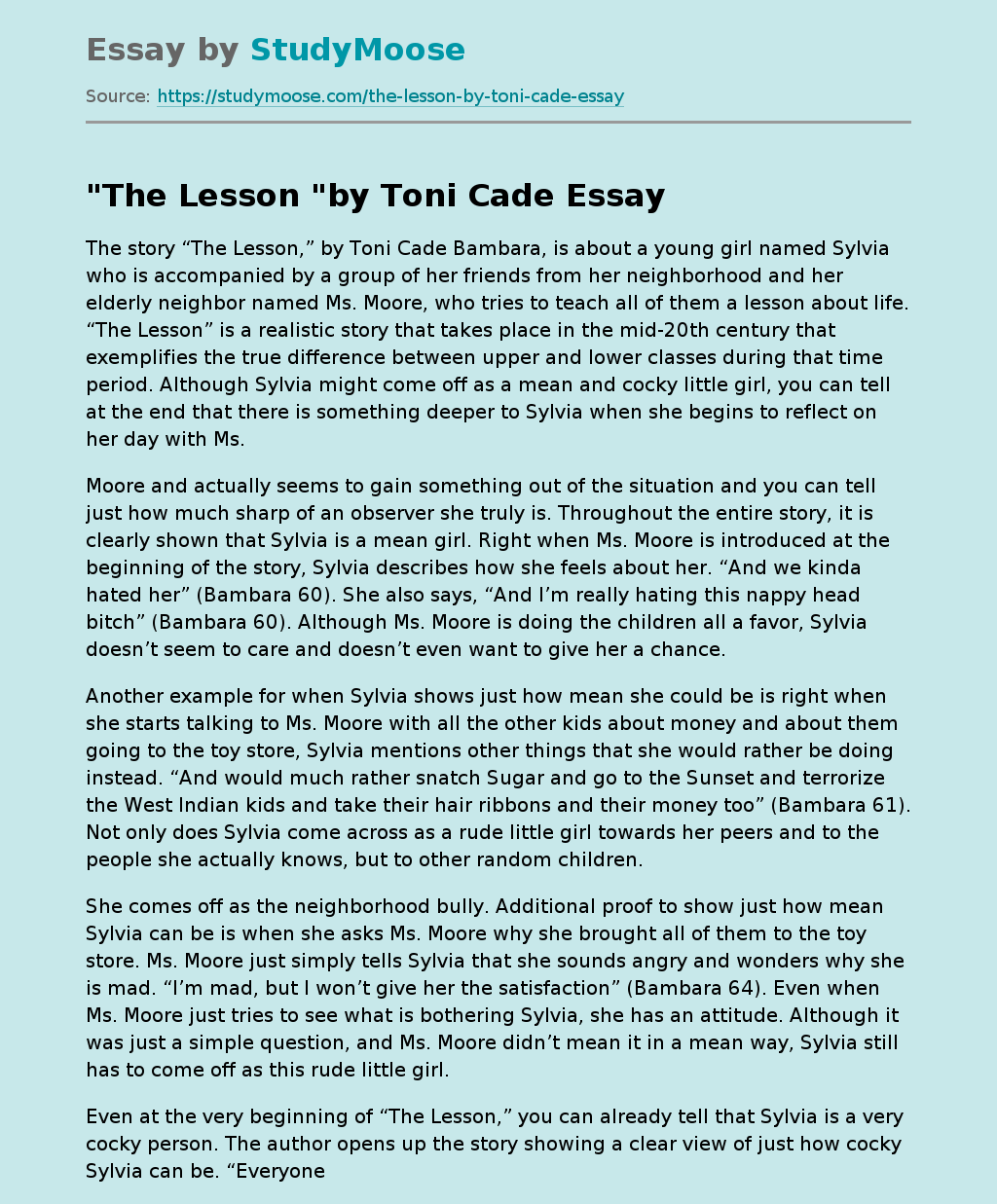