The article “Why We Crave Horror Movies”

In his article “Why We Crave Horror Movies,” published in the December 1981 issue of Playboy Magazine, thriller author Stephen King uses a sarcastic but menacing tone to explain why people watch horror films. In the very first sentence of the article, King shows that we are all insane to some degree; we are all mentally ill, but some can hide it better than others (King 222). Why do you spend so much time and money going to the cinemas to see horror movies?

We go simply to show that we are not afraid.

Don't use plagiarized sources. Get your custom essay on
“ The article “Why We Crave Horror Movies” ”
Get custom paper
NEW! smart matching with writer

Great horror films cause us to bring out our inner children, “…seeing things in pure blacks and whites…good versus evil” (King 223). The author also displays how the creepy, dark scenes of these gruesome adventures create a sense of normality in our own lives; seeing characters being chased by a creature with a chainsaw makes our lives seem much better. King also argues that everyone has two kinds of emotions: positive and negative.

The positive and negative reinforcements

During childhood, everyone is taught the differences between the two with positive reinforcements (i. e. graham crackers, and smiles) and negative reinforcements (i. e. spankings and time outs) (King 223). Horror movies allow us to release negative or anti-civilization emotions in a manner in which society accepts them. In his article, King uses picturesque and figurative language to explain why people watch horror movies. King’s article belongs in public affairs and niche magazines as Stephen King’s purpose was to entertain.

As it was published in Playboy Magazine, an entertaining read, the author portrays his thesis to the younger generation, especially young males. This can be seen when he writes that the purpose for going to horror movies is “to show that we can, that we are not afraid, that we can ride this roller coaster” (King 223). He also explains how “…horror movies, like roller coasters, have always been the province of the young; by the time one turns forty or fifty, one’s appetite for double twists or 360-degree loops may be considerably depleted” (King 223).

Roller coasters provide a thrill for young people the ups and downs and the suspense are mirrored by the effects of horror films. There comes a certain age where roller coasters no longer provide a thrill; this is the same for horror movies. King was once a boy and knows that most young males have tried to prove their bravery at least once in their lives; boys are supposed to be fearless and tough, they can take anything. King uses an informal tone to better appeal to his audience; he allows readers to better connect with his mindset.

The purpose of this article is portrayed through the opening sentence when King describes how “we are all mentally ill; those of us outside the asylums only hide it a little better – and maybe not at all that much better, after all” (King 222).. He uses sarcasm to appeal to young men, many of which appreciate the sinister nature of the article. This information may not be very accurate, seeing that the article was published in 1981, but it is relevant and sufficient to the article’s purpose. In the case of accuracy, modern-day young men have become more appreciative of sarcasm since the publication of this article.

King’s humorous, sarcastic tone appeals not only to his audience but also portrays the purpose of entertaining. In order to more effectively communicate his thesis to his audience, Stephen King uses many different language techniques. While most arguments have an essentially logical core, King appeals more to his audience through pathos, or emotional appeal. One type of language used in the article is picturesque language. King uses very imaginative language which paints pictures into the minds of his readers.

One type of language

One type of this language is when he mentions the movie Die, Monster, Die! and “Freda Jackson as the horrible melting woman…” (King 223). Readers can just picture a woman melting away like a candle. Another type o this language is when us uses the example of Jack the Ripper and the Cleveland Torso Murderer when he says “if your insanity leads you to carve up women like Jack the Ripper or the Cleveland Torso Murderer, we clap you away in the funny farm (but neither of those two amateur-night surgeons was ever caught, heh-heh-heh)” (King 223).

This creates a disturbing image within the mind and shows that King is trying to entertain his mostly male audience with his use of hyperbole and sarcasm. His choice of words makes the image more vivid; they were not only hurting these women, but literally carving them. Males appreciate the blood and gore references of these examples. This type of evidence is effective as it creates realistic images for the readers to imagine. Young males can appeal to this because of its similarity to video games; sitting in front of the television, shooting and killing people all day has to have an impact on the thinking process and indset. Things such as video games allow young minds to adapt and appreciate the gore and travesties of watching others being violated and killed. Another type of language that King employs in this article is figurative language, specifically metaphors. King uses this type of language when comparing watching horror movies to “…lifting a trapdoor in the civilized forebrain and throwing a basket of raw meat to alligators…” (224). Our anti-civilization feelings are represented by the gators while horror movies are the pieces of raw meat; we go to horror movies to satisfy the figurative hunger of our anti-civilization feelings.

This type of language helps communicate his thesis more effectively because it gives young males something which to relate King’s thesis; young males appreciate King’s sarcastic, yet sinister language of the article. The thriller author employs a sarcastic, yet menacing tone to more effectively appeal to the emotions of young males. Through the use of picturesque language and metaphors, Stephen King is able to create enjoyable, yet vivid and gory pictures into the minds of his readers and effectively explain “Why We Crave Horror Movies. ”

The article “Why We Crave Horror Movies”. (2020, Jun 02). Retrieved from https://studymoose.com/terrifyingly-compelling-new-essay 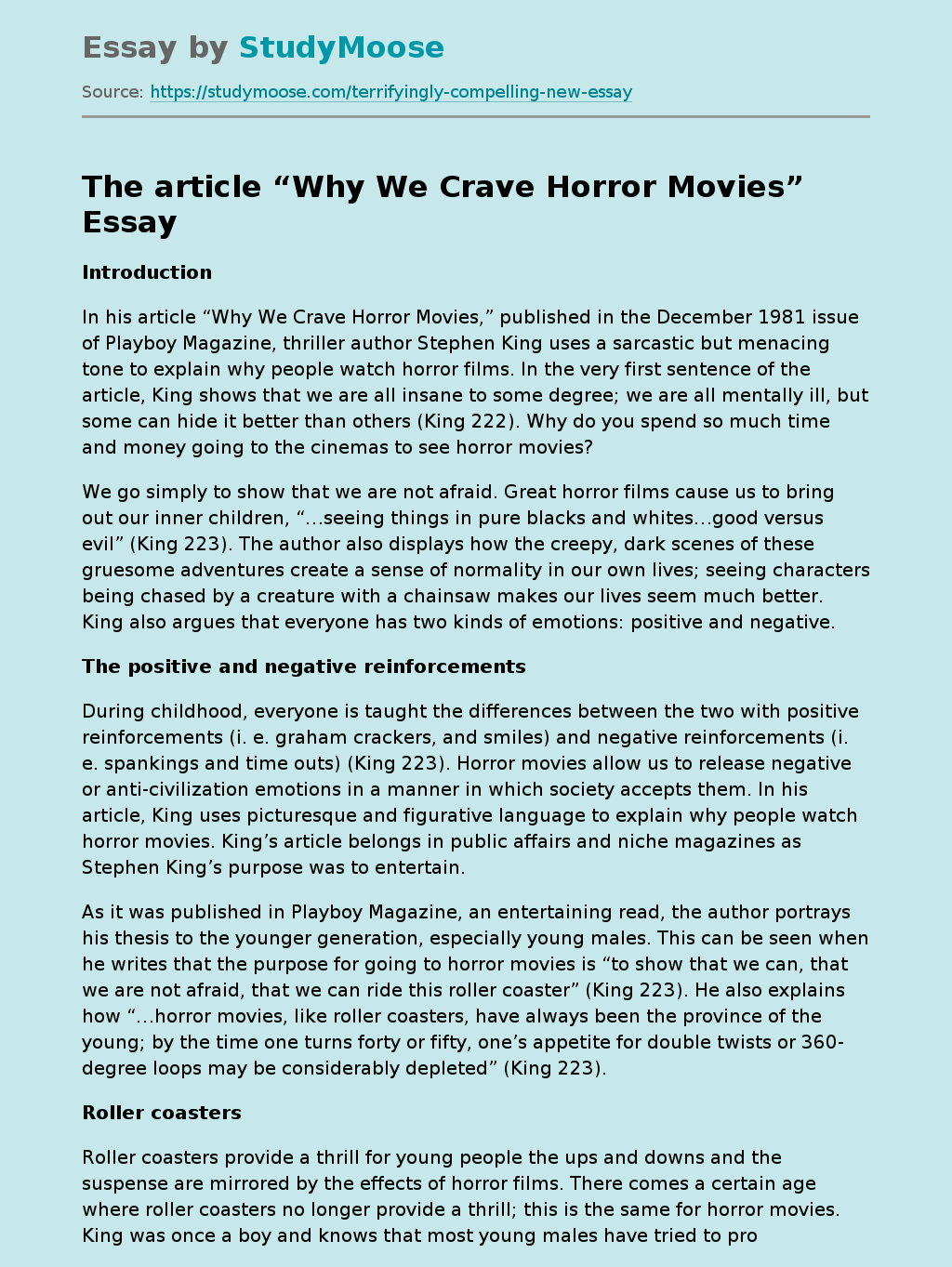