Budweiser is one of the best-known brands of beer in America. Their ads and commercials have always been known for being humorous and entertaining. Millions of people look forward to seeing the Super Bowl half-time commercials mostly because of Budweiser’s notorious commercials. Budweiser takes advantage of its reputation and makes commercials that are witty and fun for people to watch. They incorporate humor and a certain kind of sex appeal into their ads to sell their beer to men and send the message that there is nothing more pleasing in life than drinking Budweiser.

The rhetorical appeals are included in the BudLight ad to persuade the audience to drink BudLight. This BudLight advertisement uses pathos to appeal to men’s emotions and make them want to buy their product. It uses sex appeal to make the advertisement more engaging to men. There are very few beer advertisements that do not include women in them.

Budweiser uses a more mainstream and traditional sex appeal to sell their product to a certain type of client.

The women in the picture are both Caucasian and the couple in the ad is a straight couple.

In this ad, Budweiser is appealing to a certain type of American, a more traditional one. They make their product seem lavish and they appeal to a more high-class audience than other beer companies. Budweiser assumes that having these types of women in their advertisements helps their company sell more products. They are correct with their assumption because they have been very successful with their products thanks to all of their advertisements with beautiful women in them. They try to encourage beer enthusiasts to buy their beer instead of any other beer.

Budweiser is infamous for its clever marketing skills and entertaining ads. This ad displays several aspects that portray a luxurious lifestyle. There are two young women and a young man on a yacht near a private island. All of them have huge smiles on their faces to show the audience how happy they are with their lives. This ad shows how these young people are enjoying their time on this luxurious trip mostly because they are drinking BudLight. The BudLight bottles are in the front, center of the ad to make sure that the audience can see the brand clearly so that they can remember the logo.

Behind the beer bottles, there is a young man enjoying his time on a beautiful island with two attractive women and of course, BudLight. This ad makes the audience believe that this lavish lifestyle is possible as long as they have a BudLight with them. This picture gets imprinted into people’s minds and they are reminded of this ad every time they see a bottle of BudLight. The advertisement’s name is Port Paradise III. This title shows that this is just one of many places where one can go and enjoy a BudLight in the company of beautiful women.

If this is Port Paradise Three, then this means that there has to be a One and Two as well. With this title, the audience realizes that the fun never ends as long as they drink BudLight. It is incredible how advertisements can lure an audience into trying out their products. Certain advertisements and commercials may seem simple, but at the same time, those are the ones that people remember and talk about. When people think about beer advertisements, they usually remember the ones like this one because it demonstrates things that people want.

This advertisement shows how BudLight is interconnected with Paradise and makes people remember the picture. The luxurious aspect of this ad and the sex appeal used catches the viewers’ attention and makes them remember the product. The next time one of these men goes to the market to buy beer, they will glance through all of the different brands and they will see a familiar brand, BudLight. They will remember the logo that they saw in the ad and associate it with luxury because of the private island and yachts that were in the advertisement. This masterful marketing is what makes Budweiser so successful. 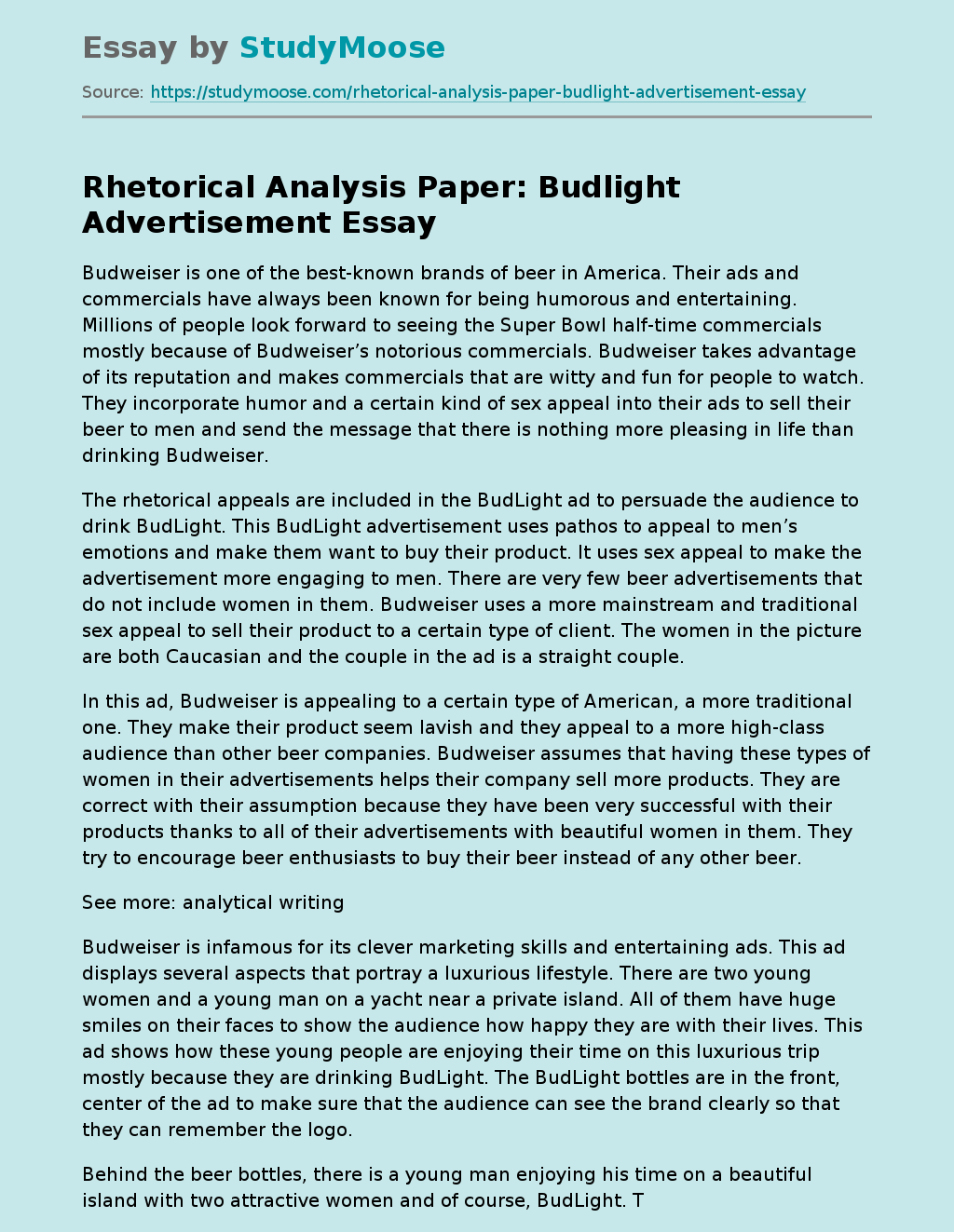