Bridge to Wiseman’s Cove – Freedom Essay by Callum Powell 8A The phrase to “set himself free” is used a lot throughout a bridge to Wiseman’s cove, whether it is to do with family issues or just common everyday tasks. Carl is constantly trying to let himself free and sometimes succeeds but other times doesn’t. Some examples are that if he’ll see his mother or every stop looking after his little brother Harley. Throughout “A bridge Wisemans cove” he goes through a mental journey facing evil family member (usually Beryl) and friends.

Don't use plagiarized sources.
Get Your Custom Essay on Family Essay Just from $13,9/Page

An example of setting himself free is at the end of the novel where throughout the book where he has been looking after Harley, feeding him, caring for him and most importantly keeping him out of trouble. Such as when Harley is caught stealing from the local store, by the time he gets back to Aunt Beryl’s house she lashes out and threatens to kick Harley out but Carl intervenes and give Beryl some of the money that Sarah gave him earlier on in the book so that she can be kind to Harley.

So by the end of the book when Harley moves in with the Duncan’s.

Carl feels a sense of relief and freedom, because he no longer has the responsibility for Harley and he no longer has to worry about him. ““When Beryl chains Harley up, Carl finds the courage to confront her at the bowls club where she has been all day playing the pokies. If you’d stayed with him, kept an eye on him, if you cared about him, he wouldn’t get into trouble. ” This is another part of the book where Carl “sets himself free” he finally sets free how much he despises aunt Beryl, she has been mean and cruel to them and trying to find any reason to kick them out.

So this is when Carl sets free how he feels and puts his foot down. Another example of setting himself free is also at the end of the book when Carl finds out that whilst on her way home from her ‘holiday’ Kerry died in a bus crash. “Carl Matt opened up too, letting go and feeling a freedom flood into him … he knew at last that he was alive to feel it” (page 241) this moment was probably one of the biggest revelations for Carl as he finally felt the sense of freedom as he was always wondering when his mum would return or if she would return.

So when he finally finds out that his mother had died of course he felt sad and depressed but at the same time he felt closure and freedom as he didn’t have to worry about her or didn’t have to always be thinking of if she will come and pick him up. This is a very important part of the novel as the premise of the book is based on family and love but Carl and Harley don’t have either all they have is each other so when they find out their mum is dead it hits them hard but also sets them free.

One last example of letting himself free is whilst Carl is working at Skips barge. Because working on the barge helps Carl get away from all his troubles and more importantly the people that don’t accept him such as Beryl. Whilst working on the barge Carl finds the freedom to try a lot of new things. “You love that barge, don’t you, Carl? …You’re the best thing that could have happened. ” Finally people were starting to notice Carl, then he had the freedom to show himself.

Throughout the book he was shown as a very shy, lonely and awkward kid who didn’t know many people and didn’t really talk or try to communicate with them. “Carl shared in…the freedom of the bird itself. Elation, freedom. He felt them both” (page 158) in some sense Carl wished that he was the bird so that he could fly away from all of his problems ad just leave them all behind. Although Carl keeps working at the barge by the end of the book he still senses a feel of freedom being away from everyone and having somewhere just to relax and forget all of your troubles.

To conclude Carl found many ways to find freedom whether it was mental or emotional freedom. The ways he exampled freedom in the text were standing up to Aunt Beryl for Harleys sack, working at the local barge and finally he having the freedom to stop worrying about is mother as he didn’t know she died on her way back home. So by the end of the novel Carl found the freedom for a lot of things and didn’t regret any of the decisions he made. 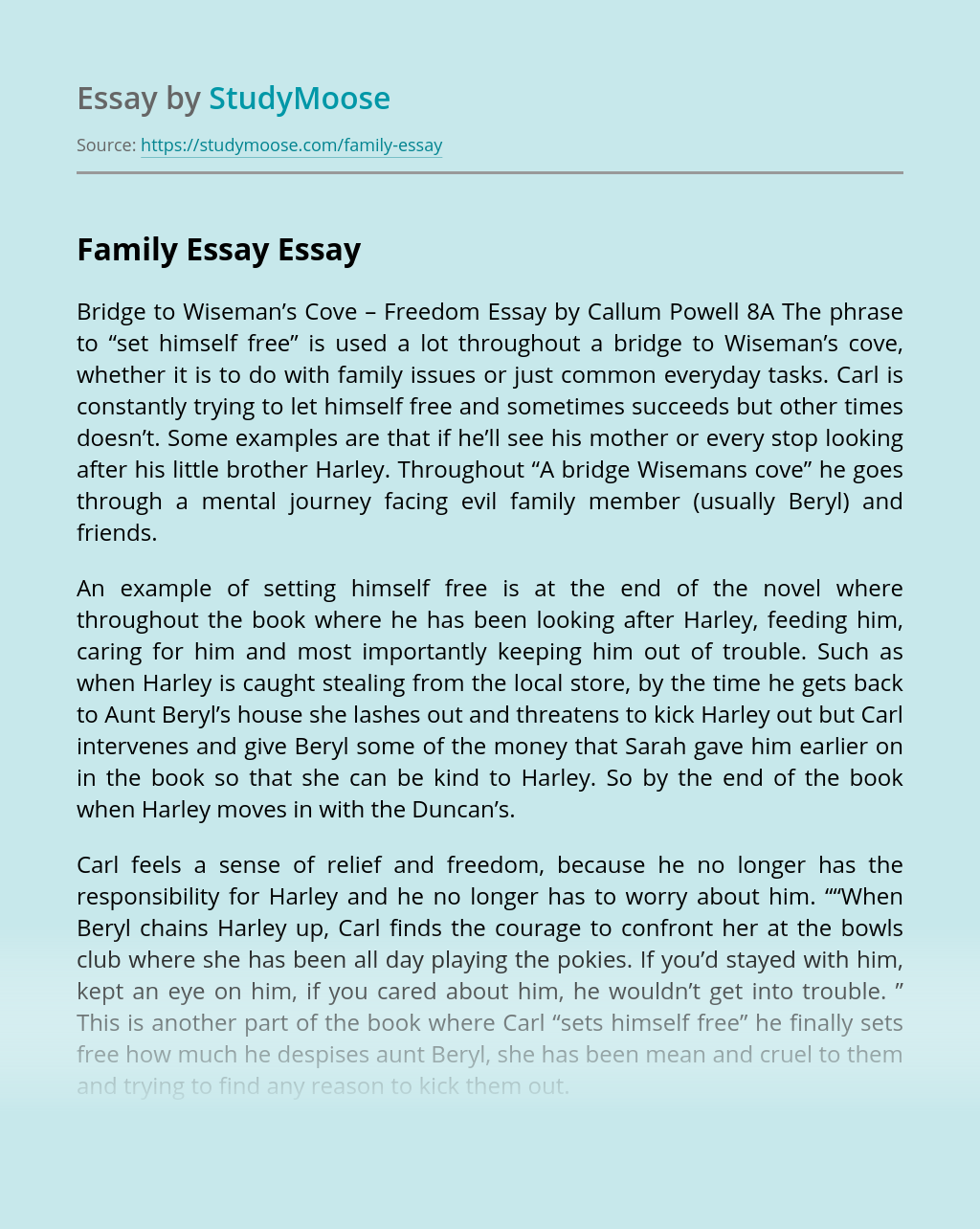 “The Veldt” by Ray Bradbury

After reading the story of “The Veldt” by Ray Bradbury, I felt shocked. The beginning was all innocent. I thought it would be about how their parents took care of babies in their own nurseries; but after a few paragraphs, I realized that this story was a tragedy. How could chldren even think of killing...

The Betrayals in Romeo and Juliet

Get Essay
My New Home

Analysis of Chapters 8 and 9 in Paradise of the Blind

Write an analysis of how Chapters 8 and 9 explore the connection between culture, food and community The interdependent connection between culture, food and community is pivotal in the demonstration of the importance Vietnamese tradition in Paradise of the Blind. Chapters eight and nine focus on the importance of culture through family particularly evident in...

My decision to write in reaction to Gary Soto’s work, “Like Mexicans” was influenced for the most part because of the similarities between myself and Gary Soto, and our families included. Gary Soto is a Mexican American male, who matured in the San Joaquin Valley in the industrial part of a town called Fresno. His...