Family Issues in My Problem With Her Anger

In the article titled “My Problem With Her Anger”, by Eric Bartels, he tells us about his life and more importantly, the marriage he holds with his wife that he loves very much. However, she has a bit of a problem with passive-aggressiveness that causes turmoil in their so far, rather successful marriage.

He starts off at the beginning of the article by describing his day, after a long work day he finishes up the dishes; only to realize that there are two dishes left in the sink to soak that had been sitting there for several days, untouched.

Don't use plagiarized sources. Get your custom essay on
“ Family Issues in My Problem With Her Anger ”
Get custom paper
NEW! smart matching with writer

As the fact both his wife and his children are already asleep, the job of cleaning the several days untouched dishes falls to him. He noted that in that moment he realized, this was the “dark heart of the divide between men and women”.

He goes on to mention that he knows his wife doesn’t have it easy, and in fact, sometimes her life is much harder than his.

She’s raising two kids, working, and still participates in family chores at home. But Bartels does the same. Since they had children, he recalls having to give up several things, these including drinking beer and ‘guy’s night out. This came with the territory, but what else came with the territory, he was not expecting. His wife begins to take her anger out on him, letting her frustrations of the children out on her husband. With an accusing “your son” or “your daughter” implying she had nothing to do with their behavior, Bartels found himself at his wits’ end.

In his eyes, Bartels is up to his eyes in things he can’t seem to do right. When he tries to give his wife a break from the busy hustle and bustle of her every day by cooking for dinner, bathing the kids, or grocery shopping, it seems he never fails to disappoint. His wife comes home, questioning why he made rice instead of pasta with their meal, why the water from the childrens’ baths haven’t been drained, or why he bought that particular thing at the store. Her temper flares and they begin to argue.

This, Bartels knows, is not healthy for a growing child, especially having two at very impressionable ages (two and six), but he knows that without the big fight he and his wife are sure to have about the smallest little thing, her anger will continue to build until a beat down, drag out filled with curses ensues. This being worse for the children to grow up seeing, he knows that things have to change.

In “My Problem With Her Anger”, Bartels isn’t placing the blame solely on his wife, in fact, it is very clear he loves her very much and wishes nothing more than to be able to give her the happiness she deserves. He is simple stating that for them to work out in the end there must be help from both sides of the spectrum. Both he and his wife must give it all they have, 150 percent, or give none at all and watch as their marriage crumbles. Clearly, this isn’t what he wants, so he is asking her, in a way, to help him save their marriage from the depths of the troubles that surround it.

Family Issues in My Problem With Her Anger. (2016, Sep 15). Retrieved from https://studymoose.com/family-issues-in-my-problem-with-her-anger-essay 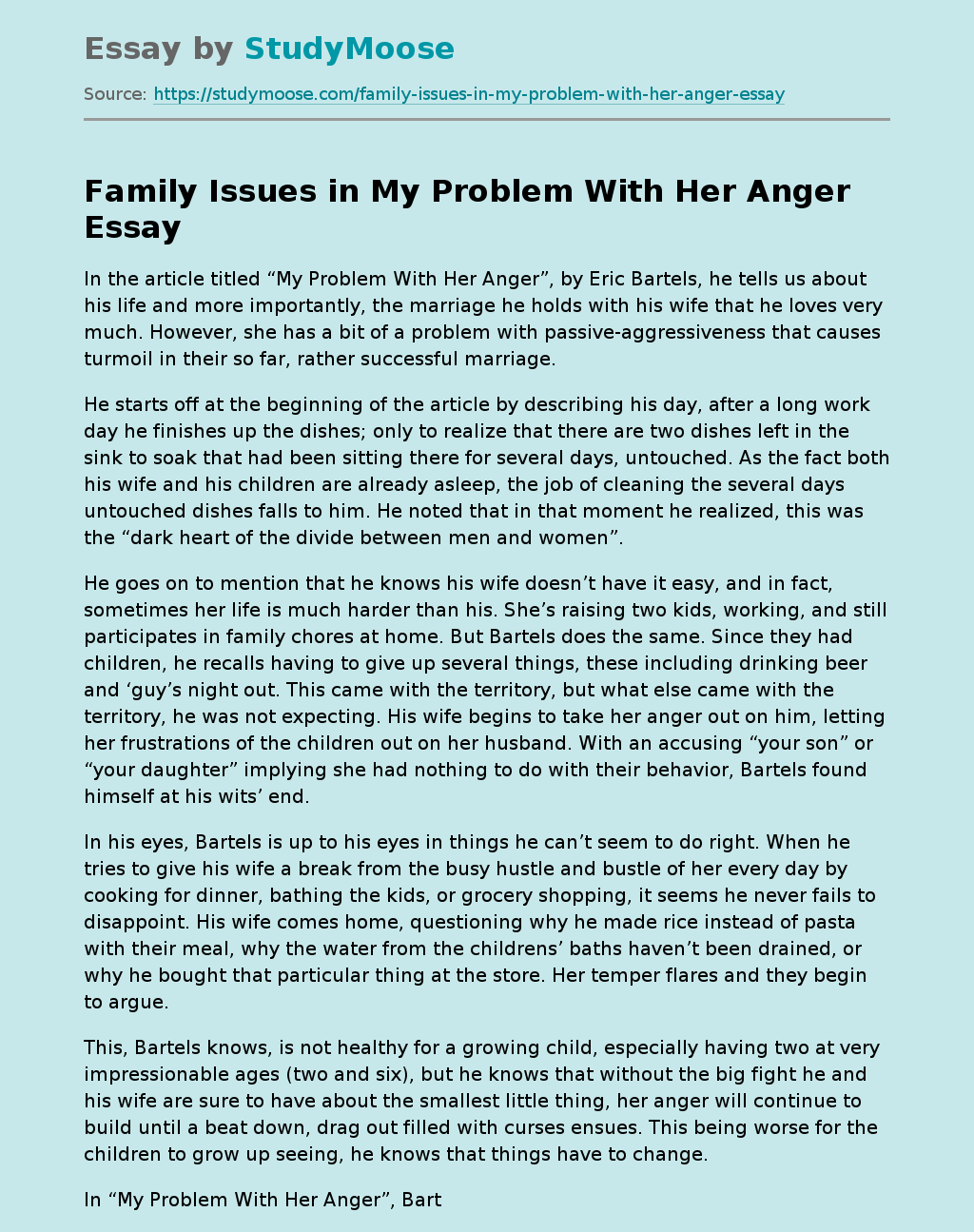