Don't use plagiarized sources. Get your custom essay on
“ Exotic Animals as Pets ”
Get custom paper
NEW! smart matching with writer

People also began to trade the animals as pets. Inside the Exotic Pet Trade states, “The practice of importing and exporting wild animals as pets has been happening for decades, and often, entertainment fads determine which wild animals are the pets de jour” (“Inside” 1). Throughout the pet trade many types of exotic animals became popular. Exotic turtles, one of the many exotic animals, grew great popularity in the 1980s because of the popular television show “Teenage Mutant Ninja Turtle” (“Inside” 1).

Although, they are very harmful.

The Humane Society of the United States says all reptiles and amphibians carry salmonella and more than 74,000 cases of it are poisonous (“Inside” 1). Regardless of the diseases the animals carry, the pet trade business has became very successful. The HSUS states the exotic pet trade is a multi- billion dollar industry but it became a huge money investment, it is second to drugs and weapons on the black market.

(“Inside” 1). Pet trade has been around for years but owning an exotic animal as a pet is not a great choice.

Having a domesticated pet can be fun and having an exotic animal as a pet can be twice as fun but it has possible trouble and difficult responsibilities that comes with it. Owning an exotic animal may sound fun at first, but most owners do not think of the needs of the animal or realize the huge responsibility they are involving themselves into. In these situations, the animal rarely has a happy ending (“Inside” 1). Domesticated animals are better animals to maintain and easier to house, unlike exotic animals. Exotic animals are not good companions.

They require housing, diets, special care, and maintenance that the average person cannot maintain (“Dangers” 1). Once the owner realizes they can no longer care for the animal, they turn to zoos or accredited institutions. But not all animals are able to receive the care needed from the institutions or zoos, so they are abandoned or killed (“Dangers” 1). Animals that are not abandoned or killed grow and are needed to be provided with more food and space. Once it reaches that point, they get locked in a cage where they are neglected or abused (“Inside” 1).

The animal has to suffer once again because an individual believes they can take care of an exotic animal. Much danger is brought to the animal when people think they are capable of housing them. Many people think taking animals from their natural habitats is best but they do not think of the suffering and possible death of the animal during the journey (Hoare and Jackson 45). Capturing an animal from its habitat causes danger to the animal as well as pet trade. Trading exotic animals introduces additional problems for the animals that have already been threatened by their habitat loss (Hoare and Jackson 45).

Once the owner takes the animal, they do not provide the care the animal needs. Individuals that intake the care for exotic animals often change the nature of the animals by keeping them in small areas, chaining, beating or even declawing and tooth removal (“Dangers” 1). Not only does the individual torture the animal, they use them for entertainment. Humans use animals for their own entertainment: “Dancing bears were commonly made to perform in Eastern Europe and southern Asia and although this cruel practice is dying out, it persists in a few places” (Hoare and Jackson 45).

Humans may think they are doing the best for the animal, but in reality they’re ruining its life. Not only is the owner risking the animal’s life but also putting its own life in danger. An exotic animal’s behavior can change at any time for many reasons in ways we do not understand (“Exotic” 1). There have been cases of animals attacking innocent people without a reason. A couple of years ago, randomly an apparently obedient elephant named Tinkerbell broke the back of a caretaker and the pelvis of another (Gambardello and Flam 1). Even tamed animals sometimes have their outbreaks and attack people.

While the animals are young they are cute but as they grow older they grow stronger, and the stress of living in an unknown and unnatural habitat causes the animals to begin to lash out, mostly at small kids (Lallanilla 1). Caging an animal may not be the best solution. It can cause the animal to get more aggressive and react in an attacking mood as well. Animals react from predatory behavior how they lived in the wild and they do not know they have to change their normal ways. James Serpell says, “A lot of an animal’s behavior is governed by predatory instinct and once you trigger the beginning of that behavior, it’s hard to stop” (qtd. n Gambardello and Flam 1).

Animals react as if they are in the wild which can be harmful if they ever get threatened or afraid. When cats play with toy mice, they use their claws and teeth and act as they are following its predatory behavior (Gambardello and Flam 1). James Serpell also comments, “That might look playful, but if the cat is 600 pounds, you might be that toy cat” (qtd. in Gambardello and Flam 1). Owning big undomesticated animals are huge risk of your life, and it should take a lot of thought before choosing to own one. The community is also at risk with an exotic animal around.

All exotic animals carry many different types of diseases. They may be poisonous and/or deadly. In the article it states, “Many exotic animals are carriers of zoonotic diseases, such as Herpes B, Monkey Pox, and Salmonellosis, all of which are communicable to humans” (“Dangers” 1). Neglected animals are an endangerment to not only the animal but also the community it is roaming in. if the animal bit someone it could spread one of the many diseases it obtains. The animal is also capable of injuring or even killing other free roaming animals (“Exotic” 1).

The exotic can physically kill another animal or a human or they kill by spreading diseases. Reptiles are the main carriers of salmonella. It has been researched and the percentage is high, said to be between 77 and 90 percent (“Exotic” 1). Innocent people within the area can be exposed to danger because of other irresponsible civilians. When the owners realize they have taken a bigger responsibility than which they can handle they either let the animal loose or pay less attention and this gives the animal more reason to escape. A wild animal alone in the community is unhealthy and affects the people in a great way.

Many large cats have escaped from their home and terrorized the communities. Incidents like these can result to either serious injuries or death to the animal, a person that came in contact with the animal or both (“Dangers” 1). There have been multiple injuries and deaths from exotic animals for the past seventeen years. Organization documents report 130 injuries and 19 deaths from big cat attacks since 1995. Most incidents happened in circuses or zoos, and six deaths were causes of escaped pets (Gambardello and Flam 1). Not every escaped or unwanted animal is guaranteed a place in shelters.

Not all shelters are able to obtain and maintain care for the escaped animals in the community (“Exotic” 1). Letting exotic animals wander around is great threat to the community and to the animal itself. Escaped exotic animals can be a major danger to other animals and to people within the community, even without close contact (Lallanilla 1). Exotic animals can harm you in more ways than just physical contact. Although most owners do not recognize the danger they are encouraging and should think of how it can affect the animal’s life, their life, and their peers’ life.

The government responded to the cases of exotic animals and problems they caused stating, “Some state and local laws prohibit the sale or keeping of exotic animals. Other states require that a person obtain a license still other states have no laws” (“Exotic” 1). Individuals with the required license should think about an exotic animals’ habitat and determine if they are really meant to be in a cage or room by themselves. Domesticated animals do not do well without people and exotic animals don’t do well with people (“Exotic” 1). Animals should not be taken from their habitat to satisfy human desires or needs. 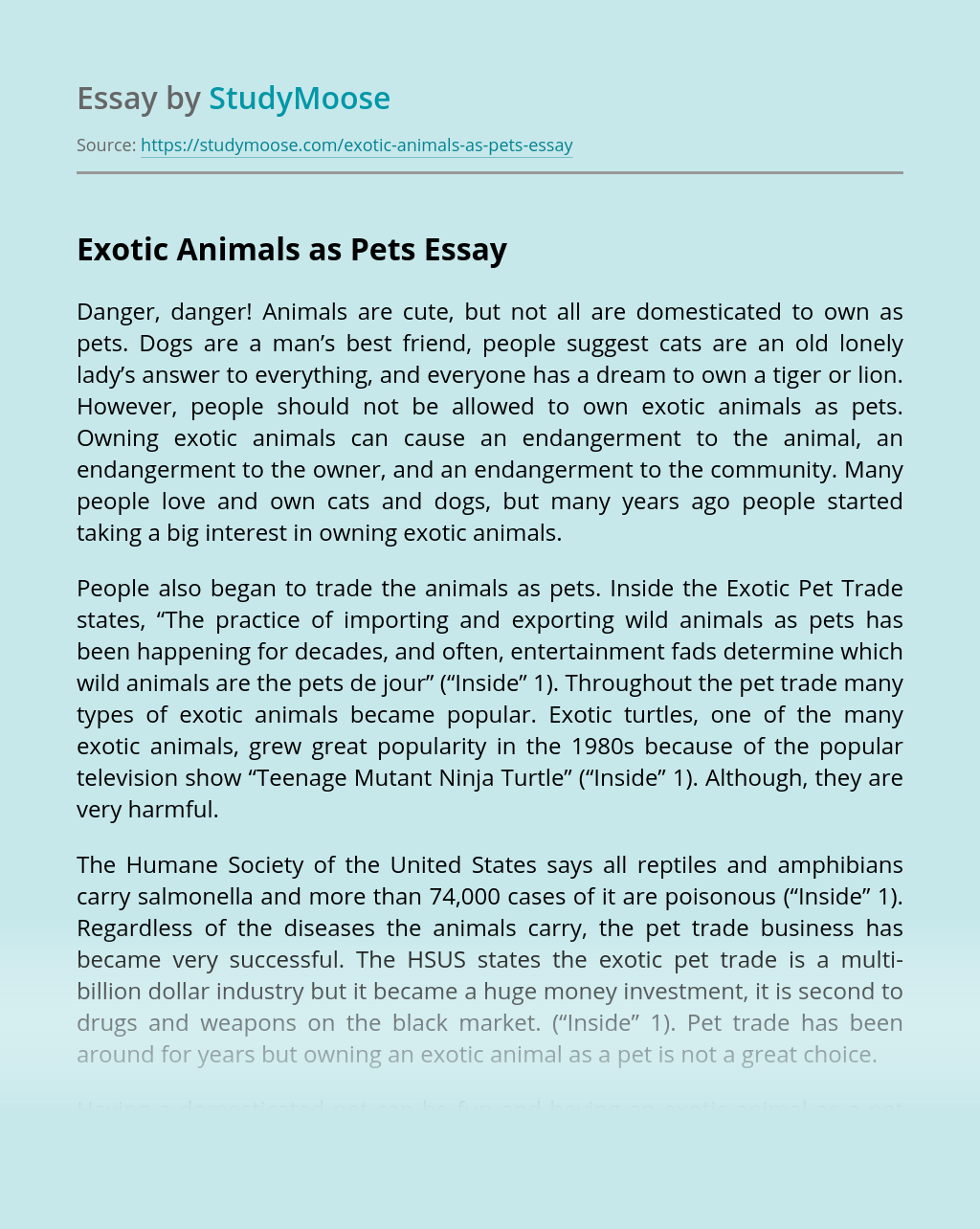