There are around 41,000 endangered species, and around 16,000 of them are on the edge of extinction. There are many reasons for animals to go endangered, such as habitat loss, pollution, disease, predation, illegal killing, and poaching. Habitat loss happens by a mixture of things logging, agriculture, the building of roads and cities, and forest fires. Habitat loss affects China’s giant panda because of the expanding buildings in China. Pollution is affecting fish in lakes and streams because of acid rain. “Acid rains kill fish in lakes and streams by increasing the acidity of water” (Haluzan 2012).

Don't use plagiarized sources. Get your custom essay on
“ Endangered Animals ”
Get custom paper
NEW! smart matching with writer

Poaching is killing rhinoceros by people killing them for their horns, to use as a dagger handle, or to be put in medicine. There are more animals being affected by these conditions, and these aren’t the only conditions animals on the endangered list are facing.

Like global warming, some people believe that its killing animals and some believe it doesn’t exist. A lot of people don’t realize how many animals are endangered, and people are the biggest cause of this.

People are harming animals and making them endangered because of factories, cars, trucks, planes, and other things that put chemicals into the air that cause acid rain and other pollutions. Oil spills, boats, yachts, cargo ships, and things like that are affecting our ocean life, making some of the fish and animals that live in the water endangered as well. People are one of the main affects to endangered animals.

There are multiple organizations that help support endangered animals and making people realize how bad we are destroying wildlife.

WWF is a major organization that helps with this issue. They have pages on their website that show you the threats that are killing animals. WWF also raises money to put towards helping animals. They raise money a lot of different ways, but their most popular way is symbolically adopting an animal.

Endangered species have a huge impact on the environment because the environment is made up of a series of habitats. Each habitat has ditritivores (fungus/bacteria), producers (plants/trees), herbivores and carnivores (mammals, reptiles and birds). Feeding habitats also develop the environment, for example the hawk eating the snake, the snake eating the rat, the rat eating the insect, the insect eats a plant. Another example is when the government wanted to drain some of the Colorado River, if they would have done that then the minnows at the bottom of the Colorado River would have been killed and gone extinct in that area. So then the small fish wouldn’t have anything to eat and die, then the big fish wouldn’t have the small fish to eat so they would’ve died, and so on.

If an animal was to go extinct then the food habitats would change, that makes the habitat change, which in return would change the environment. “Can you imagine walking in the woods without hearing birds singing in the trees, or picture what a field would be like without wildflowers blooming in the grasses? Our plants and wildlife make the world more interesting and beautiful place” (Endangered… 2012). This is a question society should know about. What if you couldn’t hear the birds sing anymore? Or hear the crunch of leaves as a deer sprints away? What about if you couldn’t see the whales and dolphins in the ocean? It’s amazing how much can change when one species goes extinct.

Science shows that animals are going endangered because of habitat loss, diseases, poaching, and pollution. Scientists believe these are the most talked about and the most well-known way for the death of an animal. Edward O. Wilson makes a good point that extinction of animals is a serious
problem. “In the small minority of groups of plants and animals that are well known, extinction is proceeding at a rapid rate, far above prehumen levels. In many cases the level is calamitous: the entire group is threatened” (Wilson 1996).

The authors Julian L. Simon and Aaron Wildavsky believe that extinction is not a serious problem. “But we should strive for as clear and unbiased an understanding as possible of species loss in order to make the nest possible judgments about how much time and money to spend in guarding them, in a world in which this valuable activity must computer with other valuable activities, including the guarding of human life” (Simon 1996). This statement is completely implausible. Humans can protect themselves from diseases with the advancement in human medical care. But animals can’t do that; they can protect themselves from predators but not from the big machines that destroy their habitat, the pollution in the air, or the illegal killing that humans are causing for them. In conclusion, humans should try their best guard these animals.

Recommendations for the future action are to have more patrols of the wild by police forces made for protecting animals. This will slow down the illegal killings and pouching. Also, if society will slow down the advancement of buildings, then habitat destruction will start to decrease. For example by saving the spotted owl it cost loggers their jobs because logging was prohibited in that area. But some people believe it is not because of the Spotted Owl that the loggers lost their jobs. “Employment in the timber industry along the North Coast has dropped for decades, long before the owl became an issue” (Cockburn 1996). Those people tried to save the Spotted Owl by stopping deforestation, but in doing so it cost loggers their jobs. Therefore, society must make sacrifices in order to save endangered species.

In conclusion, endangered animals are an enormous issue. Society knows a lot of about endangered animals. Some people are doing everything in their power to help and some people aren’t doing anything at all. If society was to stop deforestation, pollution, global warming, poaching, and illegal hunting then there wouldn’t be as many animals that are endangered. Organizations help hugely in the fight to help the endangered animals but they can’t be the
only people who help. All of society needs to help in this fight so that the next generation can have these animals. 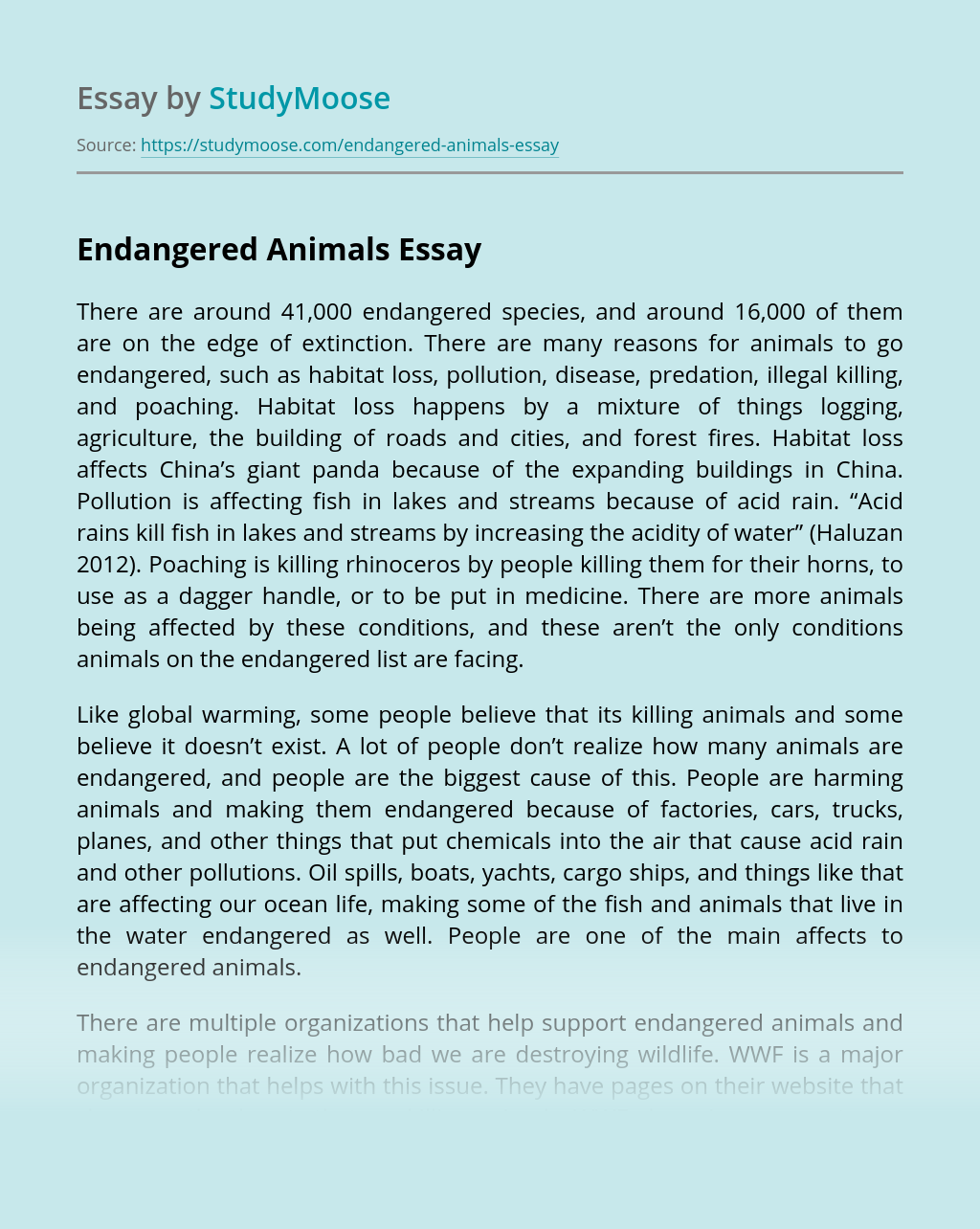