Human beings, plants, and animals, are creatures that are a part of the world. There are a lot of species that we don’t know due to endangerment. There are many animals that our kids and our grandkids are not going to know either because now they are in danger of extinction. Many animals are in danger because of us, just think about it. Every years, we as a human raze, are causing danger to many animals. There are several causes of endangered species: habitat destruction, introduction of exotic species, and overexploitation.

Don't use plagiarized sources. Get your custom essay on
“ Cause Effect Essay Endangered Animals ”
Get custom paper
NEW! smart matching with writer

Habitat destruction is when there are some changes in our planet that cause terrible consequences. Natural changes occur at a very slow pace, and it causes a slight or no impact in the species. However, there are changes that occur at a fast pace. When this happens, there is little time or no time for the species to react or to adjust for the new situation. The strongest forces in rapid habitat loss are human beings.

The loss of microbes in soils that formerly supported tropical forests, the extinction of fish and various aquatic species in polluted habitats, and changes in global climate brought about by the release of greenhouse gases are all results of human activity. Even though human beings don’t want to do that, we are not aware that some of our acts affect the species directly. You can help these species by avoiding some things that make them disappear. Stop doing those things now. You can help beautify our planet.

Natural species are those species that are within a geographical area. They have their own world there, and they are adapted to their environment and to the species that live with them in the same place. Nevertheless, there is the introduction of exotic species that are interlopers. They are introduced by human beings. They can do it knowingly or unknowingly, but anyway they do it. The exotic species might not cause serious problems, and they are also natural native species in the habitat.

However, they can interrupt the fragile ecological balances. They might produce overabundance and can cause bad consequences in the natural species that were living there.. Introduced insects, rats, pigs, cats, and other foreign species have actually caused the endangerment and extinction of hundreds of species during the past five centuries. Why do we have to continue doing that? Exotic species are certainly a factor leading to endangerment. Now we know that, so join us to become part of the people who want to stop the endangerment. Overexploitation is when there is a trade in animal parts for any purpose. Overexploitation of species affects the loss of genetic diversity and the loss in the relative species abundance of both individual and/or groups of interacting species.

Due to this deal in animal parts, many species continue to suffer high rates of exploitation. Even today, there are demands for items such as rhino horns and tiger bones in several areas of Asia. One of the most well-known models of commercial exploitation is the whaling hunting industry, in which whales are slaughtered for oil and meat. This custom has led many whale species to the brink of extinction. . It is not fair for the animals because they are murdered instead of dying naturally. They are living beings, and they have the right to live.

Endangered species are species that are still alive, but they are in danger of extinction. You can plant native plants that are local to the area. Control introduced plants and animals, recycle, reduce and reuse. You can even join an organization. Those are ways you can help the animals to live more. Even one way or another you would be helping. Fast changes, introducing unfamiliar species, and trading animal parts are just some of the causes of the endangerment. There are a lot more causes that can be avoided with our help. Those animals need us, so don’t deny your help. Be a good person. 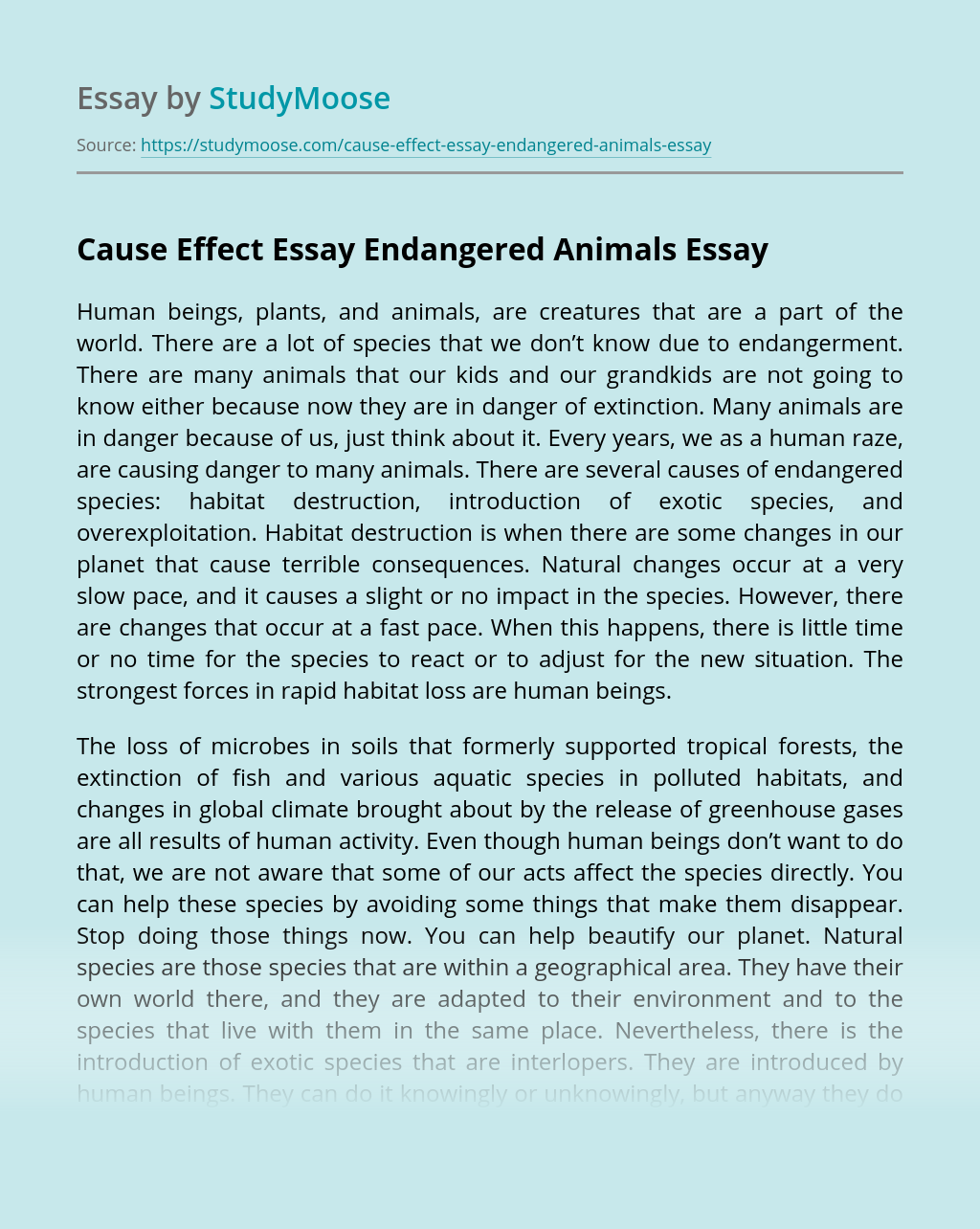