How would you feel if our species, humans, were endangered? It would be an adjustment and there would be chaos. Imagine, if you were considered to be close to extinction, nothing would be the same and your life would be different. That is what the Sea Otter has to go through.

To be considered an endangered species, these are some of the criteria that professionals look for: Has a large percentage of the species’ vital habitat been degraded or destroyed? Has the species been over-consumed by commercial, recreational, scientific or educational uses? Is the species threatened by disease or predation? Do current regulations or legislation inadequately protect the species? Are there other man-made factors threatening the long-term survival of the species? These are only several of the questions asked when being examined for the title of an endangered species.

Don't use plagiarized sources. Get your custom essay on
“ Conservation of Endangered Species ”
Get custom paper
NEW! smart matching with writer

That is such a drastic drop of a certain kind of species to be considered endangered and allowed help in a way they have needed for much longer.

When a species is classified as endangered, governments and international organizations can work together to protect it. Laws may limit hunting and destruction of the species’ habitat. Individuals and organizations that break these laws may face huge fines. That is a good step towards rehabilitation; however, it is awful that a species has to go down to that kind of level in order to get the care needed for survival.

The Sea Otter is just one of these struggling species. The reason for them being endangered is our fault. Overfishing is declining the fish population. While that can lead to many more animals suffering, a chain is linked directly to the Otters. Fewer fish mean fewer food sources for Seals and Sea Lions, so their population fell. The Killer Whales’ favorite food was Seal, so they have been forced to find another food source: Otters. Because of this, the troubled Sea Otter population in the Aleutian Islands declined by 90 percent in less than ten years. The effect of our overfishing is just one example of the harm we are causing these animals. Our habits have damaged the lives of so many more species than just the Otters. These animals who are a part of the food chain, and who help to keep us alive as well, are being negatively influenced and so many of their lives are being taken away.

Young otters usually learn what they need to know from their mothers: how to groom their fur, find food, and ride rough seas. Instead, most of the Sea Otters that become stranded are pups separated from their mothers by a storm or other disaster. Orphaned pups have not had the chance to learn and they end up on the beach hungry, dehydrated, and sick. The Sea Otter Research and Conservation Program began to help in 1984. They give them shelter and rehabilitation, then return them back to the sea. Returning them is not only the kind and compassionate thing to do, but it could be vital for the species.

At one point in time, more than 20,000 otters swam off the coast of California. Otters have dense fur and this made them valuable and the target of hunters. These same hunters brought the population near to extinction in the early 1900s. Now the Otters are protected, but their survival is still unsure and unpredictable. The peak of the Sea Otters was in 1975 at only 2,377.

The decline is attributed to the interaction of several different factors. An obvious reason I addressed earlier was fishing. There are, nonetheless, a few due to the planet: environmental contaminants, high parasite loads, and severe weather conditions. In spite of this, a major worry is that a single oil spill or another catastrophe could wipe them out. An oil spill would be due to an accident created by us; humans. An oil spill that, if created by us, could determine the lives of these animals forever.

Imagine if our population was at an increasing decline and we were constantly wondering if we would be one of the survivors. Today, we worry about taxes, paying the bill, and cleaning out stores due to the Coronavirus; but imagine, if you were worried if you would make it through the day to go get food or if you would be able to protect your family? Not only are Otters affected by what we do, but thousands more are as well. Consider what these animals are going through and do the right thing by them. Change just a few aspects of your lives to give these animals a chance at one. 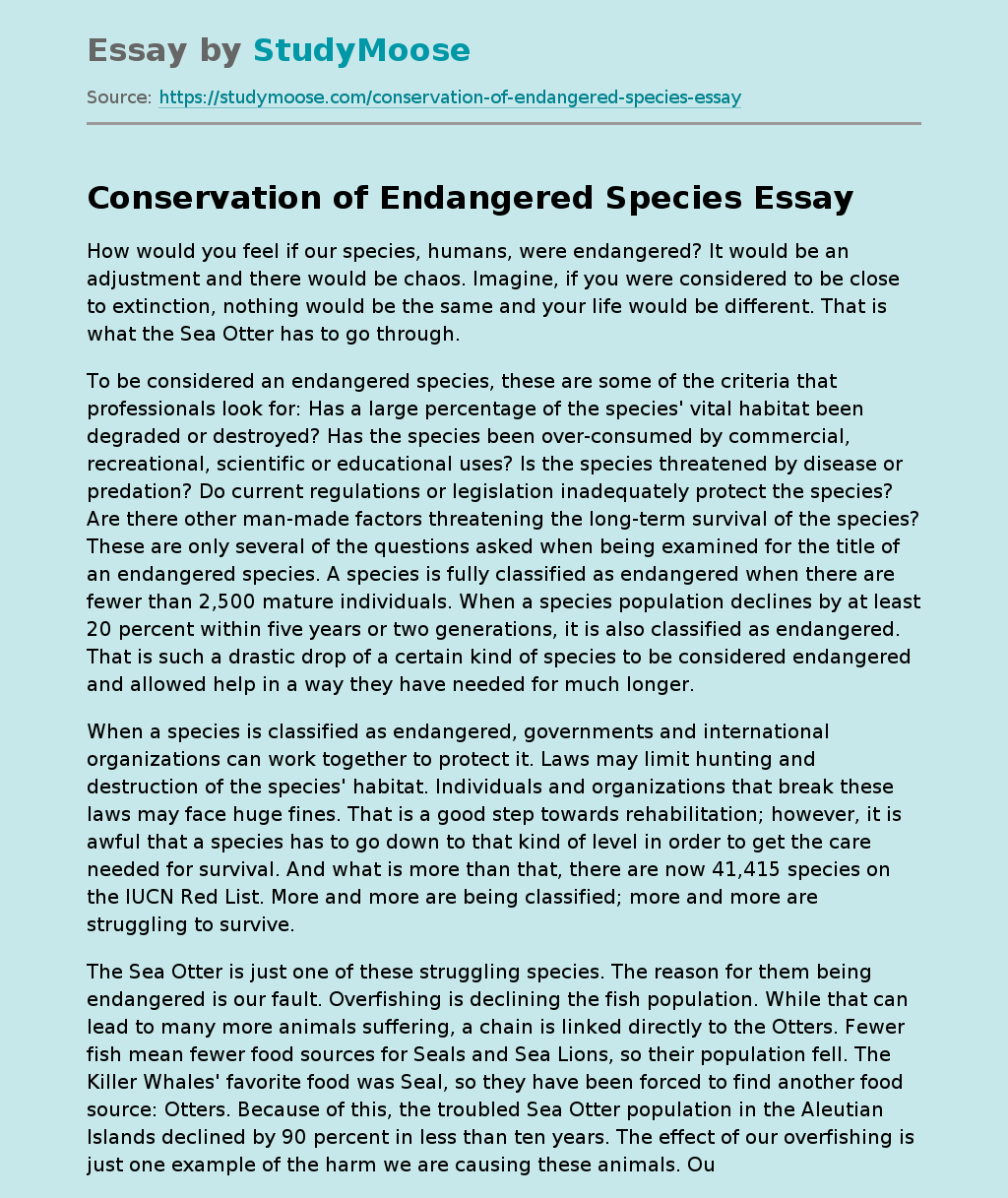