“DOOMED” was the headline on the front page of the United Kingdom newspaper, the Daily Mirror, in 1961. The article explained how rhinos were doomed to disappear from the face of the earth due to man’s folly, greed, and neglect. Rhinos once roamed many places throughout Eurasia and Africa and were known to early Europeans who depicted them in cave paintings. Long ago they were widespread across Africa’s savannas and Asia’s tropical forests, but today very few rhinos survive outside national parks and reserves.

Don't use plagiarized sources. Get your custom essay on
“ Endangered Species of Animals Speech ”
Get custom paper
NEW! smart matching with writer

52 years after the article we find that the diceros bicornis or the black rhino is indeed doomed. This rhino has been named critically endangered with a population today of only 4,848. These rhinos are found throughout southern and eastern Africa including Kenya, Tanzania, Cameroon, Namibia, Zimbabwe and Angola. My knowledge of the black rhino has increased dramatically due to my interest in endangered species.

I became interested in endangered species when an advocate from the World Wildlife Foundation came to my school in 8th grade.

Proficient in: Endangered Species Of Animals

Ever since, I have kept up with their website and read articles on what this incredible organization is doing for the advancement of endangered species. The St. Louis zoo is home to three black rhinos named Ruka, Kati Rain, and Ajabu. Ruka was born on January 14th, 2011 and was the first black rhino born in the St. Louis zoo in twenty years. In 38 zoos across the nation there are a total of 60 black rhinos. Although humans pose numerous threats to this critically endangered species of rhino, there are many conservation efforts being started to help increase the number of rhinos in the future.

Why do rhinos matter? In almost all rhino conservation areas, there are other valuable plants and animals. The protection of rhinos helps protect other species including elephants, buffalo, and small game.

Rhinos contribute to economic growth and sustainable development through the tourism industry, which creates job opportunities and provides tangible benefits to local communities living alongside rhinos. Rhinos are one of the “Big 5” animals popular on African safaris and they are a popular tourism draw in places like the Eastern Himalayas. The black rhino weighs around 1 to 1 ½ tons and the height of this rhino is relative to a 6 foot tall man. The rhino has two horns made of a substance similar to that of human fingernails. Sometimes the horns will fall off but they will eventually regenerate. The anterior horn near the front of the head is the larger of the two ranging in size from 3 inches to 5 feet.

The shape of the horn also differs between sexes: with males tending to have thicker horns, and the females often longer and thinner ones. The female black rhino uses her horn to protect her young from predators such as lions, crocodiles, and hyenas. The men black rhino uses his horn to battle attackers. Humans are the only real threat to adult black rhinos. No other animal is a match for a full-grown rhino and its heavily armored body of very thick skin and lethal horns. Even though no animal is a match for a black rhino, humans are a major threat their population. Humans jeopardize the survival of the black rhino in many ways. Habitat changes have contributed to population declines. In southern Zimbabwe, privately owned rhino conservancies have been invaded by landless people. This reduces the amount of safe habitat for black rhinos and increases the risk of poaching. Poaching is the illegal practice of trespassing on another’s property to hunt or steal game without the landowner’s permission. Poaching is the leading threat against the critically endangered black rhinos.

Poaching statistics released by the South African government reveal 668 rhinos were slaughtered—a 50% increase over 2011 and a staggering 5000% increase since 2007. Already, an additional five rhinos have been killed since the beginning of this year. Matthew Lewis, an African species expert, believes “poaching is a scourge that could wipe out decades of conservation gains made for black rhinos. A recent demand for the rhino horn has driven poaching to a record high level. In South Africa in 2010, a total of 333 rhinos were killed- almost one a day. In several Asian cultures, people believe that a rhino horn provides powerful medicine for a variety of ailments. Others, mainly those in northern Africa, use the rhino horns to make handles for special daggers. Since these rhino horns are usually very high in price, many poachers are willing to break the law and kill these endangered animals. Poaching increases during times of political and economic instability. The social and economic conditions prevalent across much of the African continent include human population growth, poverty, instability, corruption and greed. During times of political instability and war outbreak it makes it hard to work on rhino conservation. The natives are worried more about the country as a whole than on helping conserve the rhino population. Despite the many threats against the black rhino, recent efforts have been made to increase the population.

The World Wildlife Foundation has been involved in rhino conservation for nearly 50 years. The conservation efforts will expand existing protected areas and improve their management as well as establishing new protected areas, improve security monitoring to protect rhinos from poaching, and improve local and international law enforcement to stop the flow of rhino horn and other illegal wildlife trade items from Africa to other regions of the world. In October 2011, The World Wildlife Foundation successfully established a spacious and safe environment for black rhinos in an effort called “The Flying Rhinos”. Nineteen critically endangered black rhinos were transported via helicopter to a land vehicle. They spent less than 10 minutes in the air and the sedated animals woke up in a new home. This provided new territory where the rhinos have a greater opportunity to increase in number and live safe from poachers. Tracking the illegal wildlife trade and poaching will help the rhinos live safely in the wild. The World WildLife Foundation is setting up a rhino horn DNA analysis (RHODIS) that helps contribute to forensic investigations at the scene of poaching crimes and also serves as evidence to strengthen prosecution cases. TRAFFIC, the world’s largest wildlife trade monitoring network has played a vital role in helping develop innovative new transmitters to track rhino movements and protect them from poaching. They also helped set up an anonymous hotline that allows people to inform the authorities about poaching.

To monitor and protect black rhinos the focus is on anti poaching patrols and more equipped law enforcement officers. Hopefully these valiant and strategic efforts will benefit the black rhino population in the future. Dr. Barney Long, an Asian species expert, expressed that “Rhinos have been an integral part of the natural world for tens of millions of years, and humankind is causing dramatic declines in just a few decades. We can change the outcome.” The black rhino is an incredible animal with many benefits to the world around us. Humans have been causing harm to species through poaching to use the rhino’s horn, political instability and war, and habitat loss. Although humans over the years have caused a decline in the rhino population, there are many conservation efforts in place to help increase the number of rhinos in the future.

Tracking illegal wildlife trade and poaching, monitoring and protecting the areas where rhinos live, and creating new and innovative endeavors such as the Flying Rhinos are helping the rhinos tremendously already. The World Wildlife Foundation along with other organizations are putting in time and effort to save this amazing species of rhino, but they need your help! Push governments to protect threatened animal populations by increasing law enforcement, imposing strict deterrents, and reducing the demand for endangered species products. Hopefully, one day we will see the black rhino roam freely across the savanna once again. 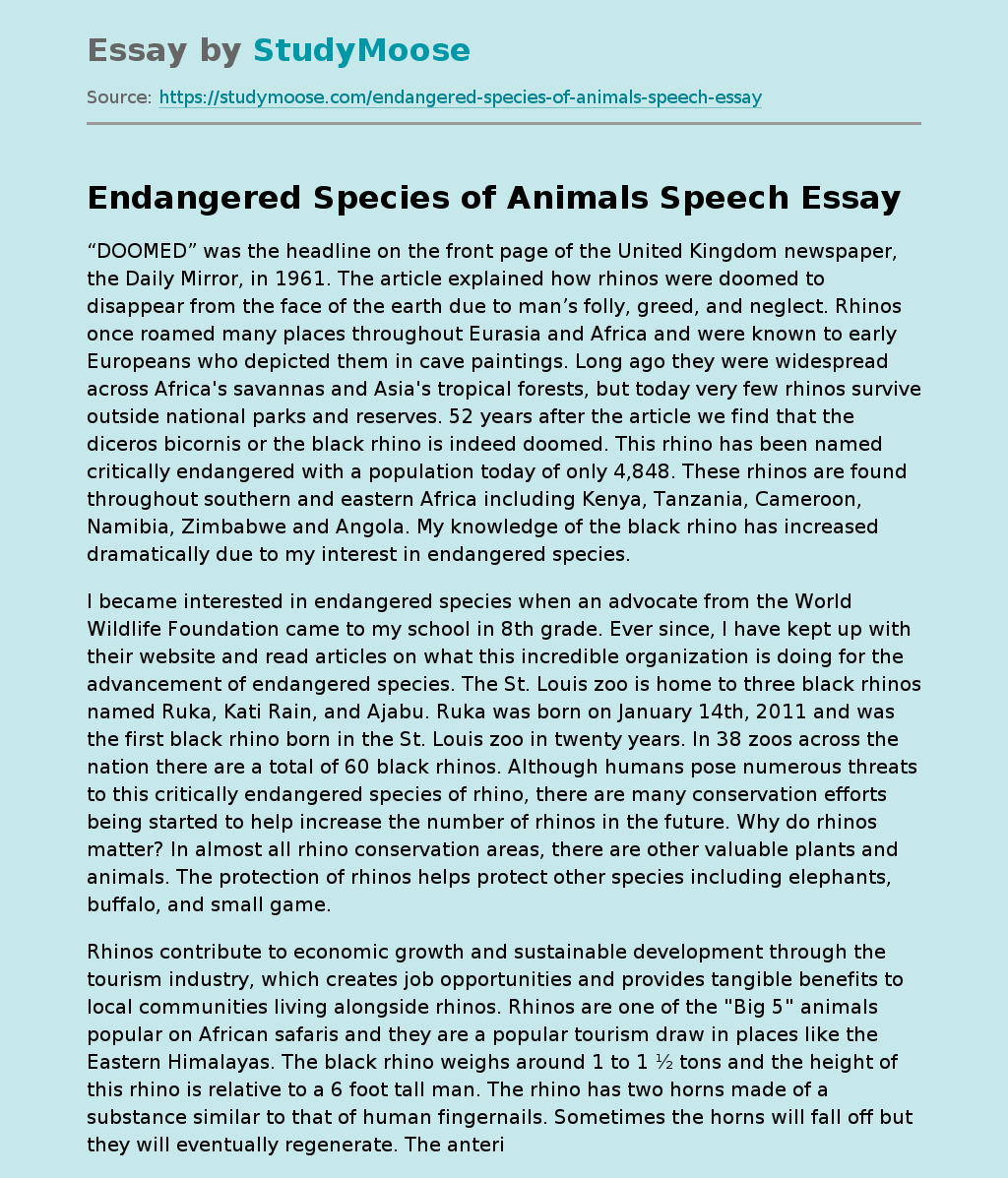