There are many endangered animals in the world today, which play important roles in our environment and in our lives. Humans are the main cause of these animals becoming extinct, but with the help of the government and caring people some of these animals have increased in numbers and have been taken off the endangered species list. Many people think that they cannot do anything to help these poor animals, but they are wrong. There are many ways in which people can help to keep these animals from becoming endangered or help save them.

Don't use plagiarized sources. Get your custom essay on
“ Endangered Animals and Species That Need Protection ”
Get custom paper
NEW! smart matching with writer

Scientists estimate that the total number of species lost to extinction each year may climb to 40,000 by the year 2000. One of these many mammals is the tiger, which lives in temperate and habitat is being destroyed. Some other mammals that are being overhunted for sport or for their fur are the Jaguar, Cheetah and the Snow Leopard. They live in many parts of the world, the Cheetah is found in Africa and India, the Jaguar in the USA and Central and South America, and the Snow Leopard in the mountains of Central Asia.

(www.endangeredcreatures.net) (World Book Encyclopedia 490). The Blue Whale is one of the many mammals that are endangered. They live in all the oceans, but are becoming extinct because they are being over hunted for their blubber, food and for whale oil.

Because most of this is cause by humans it would only be right for us to help these animals increase their population and get them off the endangered species list. There are other reasons why we should help. For one the animals are very important to our ecosystem and to medical research. Some animals have special traits or properties that would benefit humans in the medical field. By finding out what these special traits and properties are then we could find curse to some diseases or much more.

They also provide an important and crucial role in our environment and the life cycle of other animals. If animals that feed on other animals become extinct then the other animals would overrun the land. (Compton’s Encyclopedia 209). It is also important to keep these animals around so we can learn more about them and show younger generations these amazing animals. If we do not keep these animals around then our whole ecosystem could fall apart and we would be left without anything. We should also be considerate of the animals’ habitats because we must share the earth with all the creatures and it is our job to protect them and keep them from all dying off.

We can prevent these animals from becoming endangered or extinct. Parents and kids can get involved in these activities. There are many organizations where people can adopt endangered animals, and get information on how to conserve their food supply and their habitat. Conducting a community awareness survey would be a good way to let the community know that there are endangered animals in the area and let them know how they can help with the efforts to save it. The watershed in a community is important for the animals, so find out how the community’s activities affect the watershed. To save the insects and birds, kids can hold a school Arbor Day and plant trees and flowers for birds and insects that are native to their area that are endangered. Participating in river and beach clean ups is very important, because it reduces pollution in the water that could not only kill the poor little animals but hurt humans as well. If people would not pollute the earth in the fist place then river and beach clean ups would not be necessary. People at home can plant gardens that attract wildlife, birds, and butterflies so they will have something to eat and someplace to rest. Putting out bird feeders in the winter can help with the prevention of bird starvation in the winter.

Also writing to the governor of a town where endangered animals are common could help to build a place where they could live free from hunters and other predators that endanger them. Over hunting is a major part of animals becoming endangered, so find out what animals are endangered or are rare and don’t hunt them for sport or for their fur. Private land owners can really help in the preservation efforts because they can conserve the land that they own if an endangered animal lives on it, or they could use their land to build a wildlife refuge. (http://fisheries.fws.gov/ma.html)

Here is a list of organizations that people can contact to get more information on helping to save endangered animals:

Even though there are some exceptions to this rule it has helped tremendously. (Lampton, Endangered Species 17) Zoos are also important because they take in animals and show the people how cute they are and teach kids how to be kind to the animals. When people buy souvenirs from the zoo part of the money goes to organizations that help endangered animals. Even though the space at the zoo may not look like much the animals are better off there than in the wild or our running free where they could get ran over or killed by some non-animal loving person. The zoo also informs people of endangered animals and what they can do to help.

There are many animals out there that are important to us and our environment and need to be helped. There are many people that can do stuff for these animals. Through organizations, government help, and zoos lots is being done to help. So please be kind hearted and help save the poor little endangered animals. 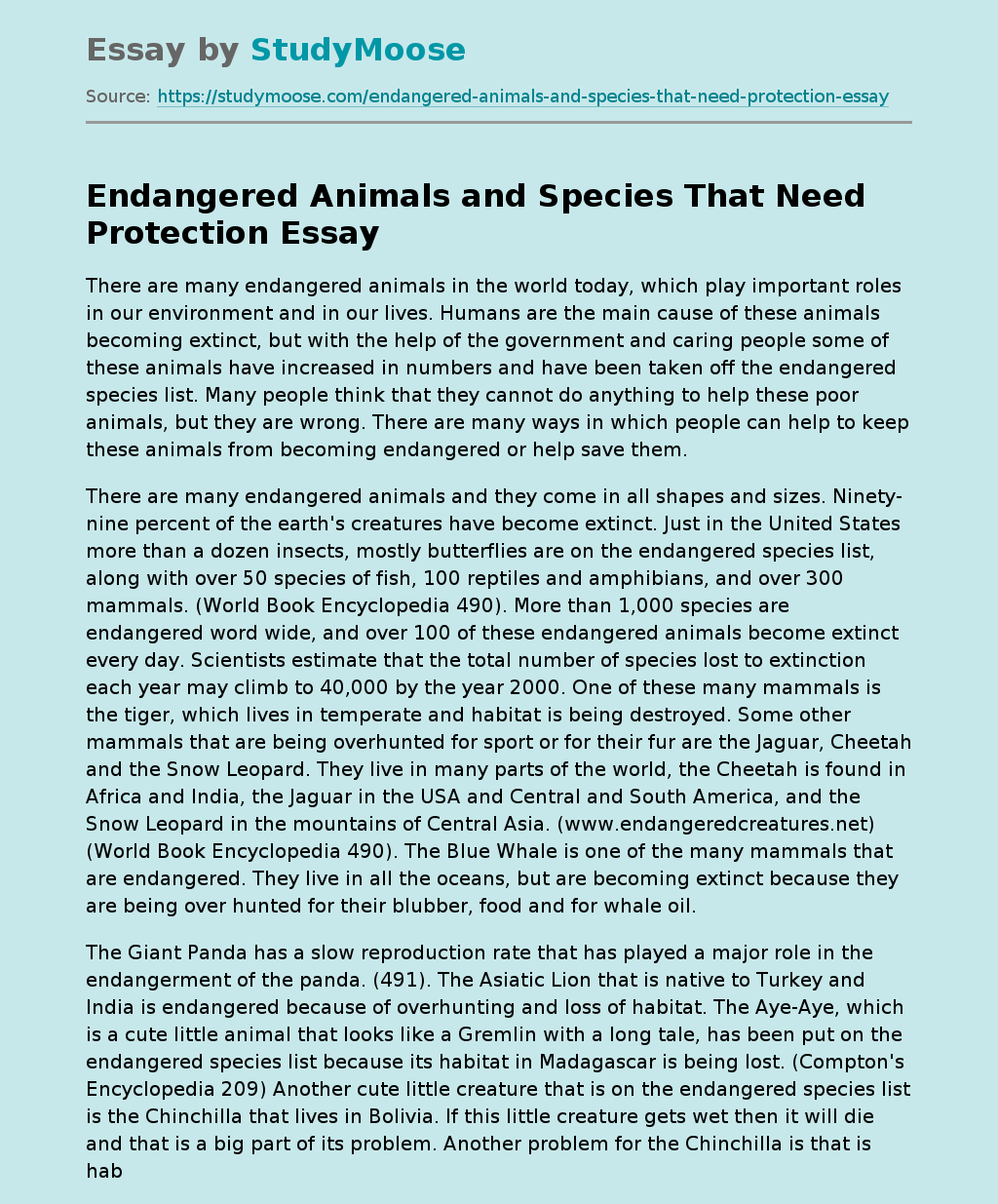