Endangered species are native species that faces a risk of extinction in the future. For example, animals that are already extinct like the dodo birds, platypuses that are going to be extinct and many more. These animals are endangered due to climate changes and habitat destruction. The term endangered species can be used in a legal or general context. In a general context, it means species that are facing extinction but it is not protected by the law. When used in a legal context, it refers to a species that is protected by the law (Klappenbach 2013).

Don't use plagiarized sources. Get your custom essay on
“ Endangered Species Should Be Prioritized ”
Get custom paper
NEW! smart matching with writer

According to the World Wildlife Fund, there are 801 animals that are already extinct and 3,789 number of animals that are critically endangered. Although it is believed that we should leave nature to take its own course in determining the fate of these species, we need to start prioritizing these species because if the endangered species go extinct, it will cause the imbalance to the ecosystem, preservation of the endangered animals can bring huge benefits to mankind and wild animals represent the Earth.

Proficient in: Endangered Species Of Animals

We should protect these endangered species because if these species go extinct, it can imbalance the ecosystem. Firstly, the ecosystem imbalance can be a threat to the human health. It can prevent diseases and it can also sustain good health for the humans. The ecosystem supplies the humans with shelter, clothing, food and a stable climate. The forests provide the mankind oxygen. If humans keep chopping down all the forests, humans will not have enough oxygen and by the end of the day, humans too will be extinct.

Moreover, every single animal is important for the balance of the ecosystem. If one animal has been wiped out, it can ruin the chain life. For example, if algae in the pond is destroyed then the tadpoles that feasts on algae will no longer have food. The tadpoles will die of hunger which will mean, there will be few frogs left. The lizards outside of the pond which rely on the frogs for food will have nothing to eat and the lizards will eventually die.

Then the birds that rely on the lizards will die and the food chain goes on and on. As you can see, killing one little life can be abig effect to the food chain. Humans are constantly coming in contact with the endangered species that they have become extinct. Most of the animals and plants are destroyed by illegal logging. According to WWF, 73% of timber production in Indonesia is believed to come from illegal logging, 25% of Russia’s timber exports originate from illegal logging and 70% of the harvested timber in Gabon is considered illegal. Imagine how many species the humans killed from the statistic. It is important to preserve the endangered species for our future children.

Endangered species should be our priority because we should also preserve the endangered species in order to cure sickness. Animals and plants can bring us a lot of benefits like medicine benefits. About forty percent of the medicine these days come from the natural compounds of different species. These species can be very helpful and also a life saver (Kurpis 2002). We may never know that in some forests there are plants that can cure AIDS or cancer. If we keep clearing forests, we destroy plants that can save the lives of many people. There are some exotic plants like the Calendula flower. The Calendula flower is use to heal treatments for irritations such as eczema (Hughes 2013).

The Ginseng plant can be use internally, it stimulates the immune system, lowers high blood pressure and it has the ability to handle stress. Another reason why we should preserve the endangered species is so that our children in the future can see the animals we have now. Animals like the Orangutans are endangered now. Due to deforestation and hunting, the Orangutans are at risk of being extinct. Our children may see the Orangutans now but if they go extinct, they cannot see the Orangutans anymore. Preserving species can also increase the ecotourism in our country. Tourists from all over the world can visit our country and admire the beautiful nature that we have in our country. It will also increase our economy. Places like Bako National Park attracts foreign tourists to visit and see the unique plants and animals we have. Tourists will be amazed with the beauty of our forests and maybe they will come back again.

Protecting these endangered animals is very important for us humans because these animals represent our Earth. Without them, we will not be living on the earth till this day. It is the humans’ fault that the animals are endangered. Humans do illegal logging, poaching and hunting. Many species are destroyed by these human activities. Therefore, it is the most responsible thing to do to protect the endangered species. It is the least we can do to make up what we have done to these poor animals and species. Put yourself in their shoes. What if our home has been blown up and we have nowhere else to go. That is how the animals feel. We should feel some empathy for these animals. This is because, if the animals go extinct, it will disrupt the circle of life and also the food chain. We have more knowledge than the animals. As humans with more education, we know what is best for the animals. We should provide them with good shelter. We also have the money to do so. Animals do not work for a living and get paid. We should use what we have to protect the species.

Even though most animal activists believe that we should protect these animals, we can understand that we should let nature takes its own course. Animals die due to environmental change. For example, global warming. Due to global warming, it will cause a draught. The species would not have water to drink and eventually they will die. That is how nature works. We cannot fight the nature. However this argument is weak because we are the one who have caused this change in nature. Humans cause global warming. Humans do activities like open burning, illegal logging, harmful smokes from factories and many more. Due to massive illegal hunting, animals are not reproducing. If humans are always hunting and killing animals, it will be hard for the animals to mate and therefore they cannot reproduce more and the animals are at risk of extinction due to these cruel human activities.

We should also use less pesticides on our plants. It is hazardous and it can affect the wildlife at many levels. We should report any shooting of animals to the authorities. Harassing wildlife is illegal. Conserving the habitats is one of the most important ways to protect plants and animals that are at risk of being extinct by protecting their habitats in national parks. However they cannot live with too much interference from humans so we should protect habitats outside reserves such as farms and along the roadsides. We can also plant native plants around our housing area. It will attract birds, butterflies and maybe even some threatened species. This is why we should protect the endangered species and not leave them to die.

10 Easy things you can do at home to protect endangered species, viewed 30 June 2013, <http://www.stopextinction.org/10athome.html>.

Why Every Animal is so Important for Keeping Earth’s Ecosystem Healthy, viewed 17 June 2013, <http://earth.com/why-every-animal-is-so-important-for-keeping-earth%E2%80%99s-ecosystem-healthy-by-admin-on-june-12,2010>.

Endangered Species Should Be Prioritized. (2016, Apr 12). Retrieved from http://studymoose.com/endangered-species-should-be-prioritized-essay 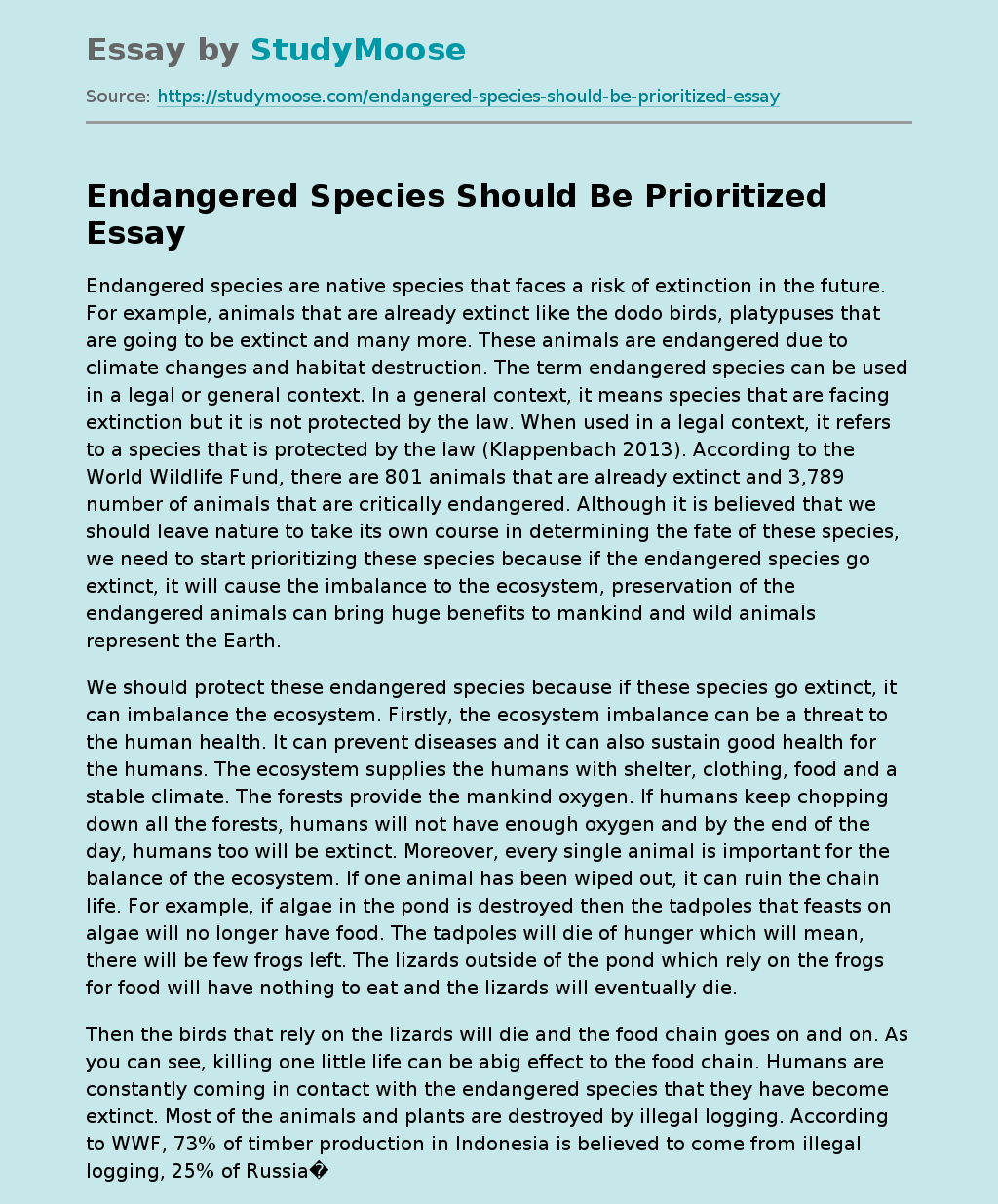