Poaching is a very serious epidemic that affects all countries around the world. Animal poaching is the act of illegally capturing and killing animals and using them for trade. They are used for food, for clothes, wool, cosmetics, ornaments, fat, and decorations and even for sport. It is different in every country and affects many species of animals to the point of extinction. Poaching is a crime against endangered species and other wildlife and should be stopped. Poaching is not the same as the regulated hunting sport.

Don't use plagiarized sources. Get your custom essay on
“ Animal poaching ”
Get custom paper
NEW! smart matching with writer

Hunters have licenses to practice hunting as a sport and they practice and follow the laws inflicted on them including following the hunting season and only hunting designated animals on regulated hunting grounds. A poacher does not contain a hunting license. They kill animals all year long regardless of what animals are in the corresponded hunting season. Even if they are in season, they may also often use illegal weapons, such as spears or inhumane traps, to kill them.

In some places, it is illegal to hunt animals in the nighttime.

Poachers may also hunt animals on private properties, wildlife sanctuaries, or any other areas that don’t allow hunting. A poacher’s main objective is to gain large profit by selling or illegally trading. (Wildlife Museum) Hunters use different methods to capture animals. Some use objects called snares. A snare is a set of wires configured to capture any animal that gets into it. They are most often tied to trees and the animal is trapped from their leg or neck.

These are unreliable for hunters because they don’t always capture the desired species or gender.

The use of dogs is very common when it comes to poaching. Dogs chase the animal into large nets, known as trap nets. They can also be chased into pitfall traps. A pitfall trap is a large hole in the ground that is hidden with leaves and plants that an animal falls in when it tries to walk over it. One of the most common methods poachers use to capture animals is using military grade weapons and tranquilizer guns. The animals are shot to be stunned and are sometimes already unconscious when they are killed or have parts of their bodies removed. (Wildlife Museum).

Animal poaching varies by country. In Norway and Canada, hunters slaughter harmless seal pups as a sport. It is known as “seal clubbing”. It was even previously an Olympic sport. They are mainly killed for fun but they are often turned into coats, hats, or rugs. Fishermen claim that it is to stop the seals from taking fish. (Jowitt and Soldal). Elephant poaching is very common in some African countries, such as Kenya. Elephants are killed for their rare meat, hide and the ivory in their tusks (EleAide). Rhinos are commonly killed in Asia. They are killed for the ivory in their horns.

Rhino horns are estimated to average about $18,000 a pound in value. Ivory is a substance used in pills, tablets, herbal treatments, and tonics in countries all over Asia. Over 388 rhinos were killed in 2012. So far this year, 278 were killed. There are only five species of rhinos left in the world due to poachers. (World Wildlife Fund). In Tanzania, shellfish are captured alive and are killed for their shells. The hollow shells are illegally sold to vendors and are then sold to tourists as souvenirs. The Japanese government consents to dolphin, whale, and shark hunting.

Even though their meat is filled with toxins, dolphins and whales are sold in markets for human consumption. Sharks are often captured to have their fins amputated then are thrown back into the ocean to die. The fins are then sold to restaurants for shark fin soup. (Blue Voice). These helpless animals are left to drown or bleed or to death. Poaching is one of the main causes for species becoming endangered and extinct. The polar bear population has gone down two-thirds due to poachers hunting them for their pelts. Only 20,000-25,000 are estimated to remain. (Czartoryski).

By 1936, the Thylacine, also known as a Tasmanian tiger, became extinct because they were killed by farmers that believed they were responsible for attacking their livestock. They were also hunted and sold to a textile supply company called Van Diemen’s Land Company who used the incredibly rare pelts for rugs and coats. (Czartoryski). The Northern Right Whale has been recently put on the list of endangered species. There are only 350 left in the entire world. They are named as such because they are considered the “right” type of whale to hunt because of the amount of oil they possess.

(All About Wildlife). The skin of the Chinese Baiji Dolphin was considered highly valuable and was used for handbags and gloves. They were last spotted in 2002 when they became listed as endangered. They were officially declared extinct in 2006 after scientists failed to detect any living in the Yangtze River. (Moss 3). Poachers are the reason animals are going, what some environmentalist call, “The Way of the Dodo,” a species of bird that were flightless and fearless of humans, hence making them easy targets for poachers. They went extinct in the early 17th century.

There are many laws that protect all endangered species and give justice to those that were wiped out by prosecute poachers who treated them inhumanely. Here in the United States, the Endangered Species Act was established to prohibit the importation, exportation, or commercialization of fish and wildlife in interstate or foreign commerce. (Kurpis). Kenya has strongly enforced a law that criminalizes wildlife poaching, importing, exporting, and transferring animal trophies. The penalties consist of prison terms and fines. They must also forfeit the instruments and tools they used to capture or transfer the animal. (Library of Congress).

The Central African Republic possesses laws that allow hunting activities in certain areas and only with government authorization. It is prohibited to hunt elephants and other animals used for ivory. Any individuals that violate these restrictions can face fines or imprisonment. (Library of Congress) The government of the Republic of Botswana, a country in Southern Africa, bans all means of poaching. These include animal trading, trophies, meat, and clothing made without the proper permits or licenses. These also would penalize the offenders with revoking their hunting licenses or any licenses pertaining to trade.

Any offenses that involve a specific animal or a repeat offender would result in even greater consequences. (Library of Congress) Despite the many poaching groups around the world, there are also many organizations that were created to help stop poaching and help protect the rights of animals. The World Wildlife Fund for Nature is an international non-governmental organization that works on helping conserve, research, and restore the environment. It works in more than 100 countries with over five million supporters, making it the world’s largest independent conservation organization. (World Wildlife Fund).

The International Anti-Poaching Foundation helps create global awareness of environmental issues that include decreasing animal populations and lead research in sustainability balanced ecosystems. (International Anti-Poaching Foundation). The Humane Society of the United States is an animal protection organization. They help advocate for better laws that protect animals. They help create rescue facilities, wildlife rehabilitation centers, and mobile veterinary clinics. Their mission is to stop the exploitation of animals and end animal cruelty. (The Humane Society of the United States).

All of these organizations have helped educate society on what animal poaching is. They have helped spread awareness on what products are made by poachers, such as meats and furs. They also encourage people to buy food that are free ranged and products that were made with environmentally friendly materials. They are helping save many animals from becoming extinct and even taken off the list of most endangered species. For example, the World Wildlife Fund obtained a petition with 38,000 signatures from 127 countries to save the Vaquita, a previously endangered species of porpoise.

They worked with Mexican President, Enrique Pena Nieto, to create regulations against capturing the Vaquita while fishing. (World Wildlife Fund Global). They have successfully saved this animal before it became erased from existence. They have truly made a difference on the environment and all wildlife. Poaching is a very serious epidemic that affects the entire world in different ways. Many species of animals, like tigers, polar bears, elephants, and rhinos, are quickly becoming endangered and even extinct because of hunters and poachers.

They illegally capture, torture, and often kill animals to obtain their skin, fur, pelt, meat, and other parts of their bodies, such as horns, tusks and fins. These helpless animals are killed for profit and sport. They are made into ornaments, rugs, clothes, and are even sometimes stuffed and mounted to walls as decorations and trophies. These animals are unable to fend for themselves and are most often wounded and abandoned to bleed to death. Poaching is an illegal, deadly crime against nature, endangered species, and all wildlife and it needs to be put to an end.

Animal poaching. (2017, May 21). Retrieved from https://studymoose.com/animal-poaching-2-essay 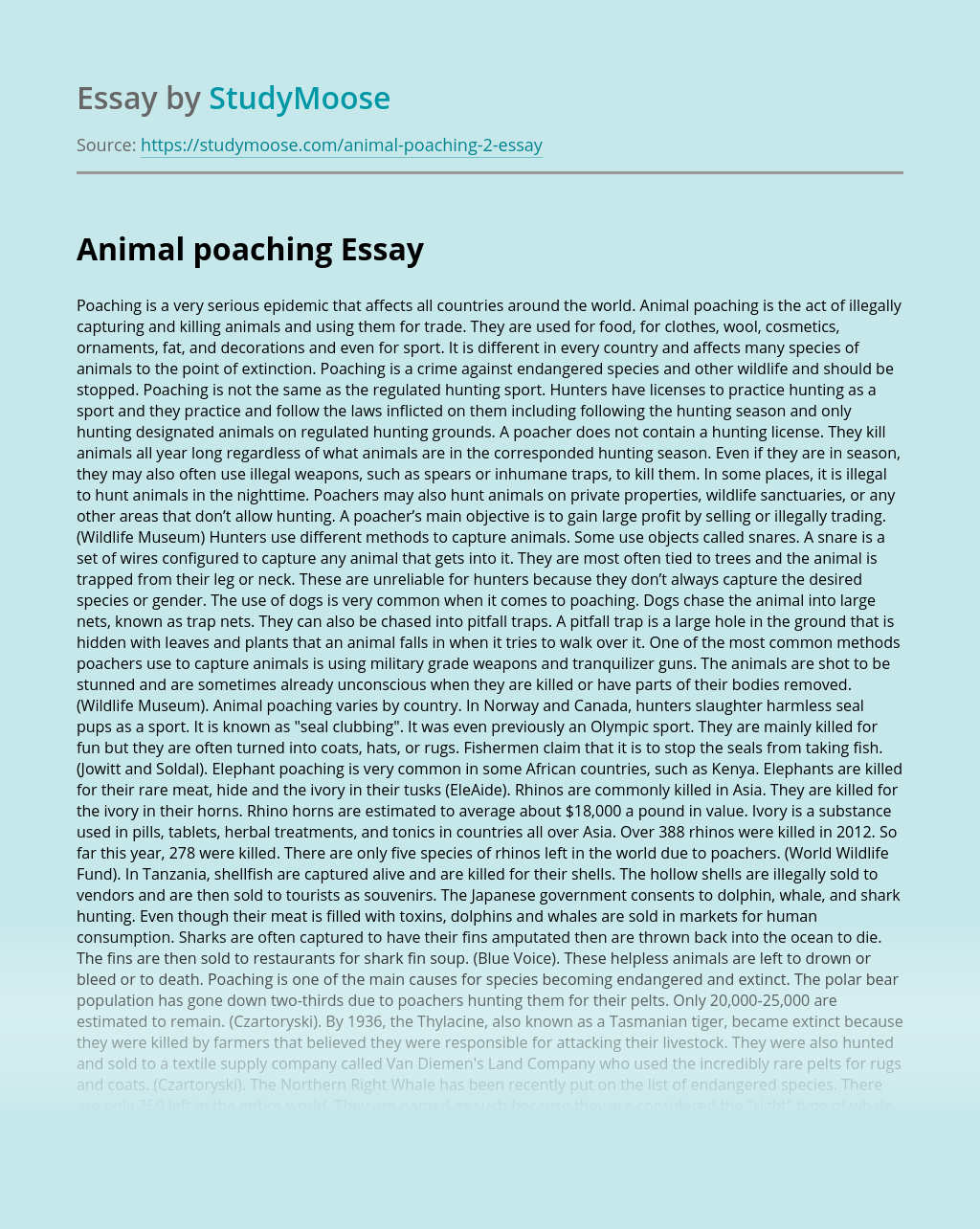