‘The only thing necessary for the triumph of evil is for good men to do nothing.’ (Edmund Burke). In order to stop evil and malicious acts from occurring, the people whose responsibility it is to enforce the laws must step up and stop these terrible acts. By ignoring the evil and not attempting to stop the evil, the good can harm themselves or other innocent people. If there is no resistance to evil, it is just like a football team allowing a player to score a touchdown without trying to tackle the player with the ball.

Turn in your highest-quality paper
Get a qualified writer to help you with
“ Allowing Evil to Triumph ”
Get high-quality paper
NEW! AI matching with writers

In each case, it is extremely easy for one side to overcome the other. Therefore, by not exerting any effort to oppose the evil, the good are just inviting the evil to do as they wish.

Being one of the themes of the poem The Hangman, this quotation can be related to the actions of the Hangman and the people he killed. Once the Hangman began killing, nobody tried to step up and stop the Hangman (except for one person who was killed).

If the good men do nothing and make no attempt to halt the evil, then the evil will triumph as a result of this lack of action.

In today’s society, many people complain about all the political corruption that occurs in government, but none are willing to step up and take on this opposing evil. If one would look at the United States’ voter turnout in comparison with other nations, one would notice that the turnout is extremely low. This is a great example of how good men doing nothing allows the evil to triumph. If all of those people who talked about getting the evil politicians out of office actually voted, then they could possibly be removed from office by the voters. Therefore, if all of those good people acted upon their spoken words, the evil people of the government might be able to be removed from office.

In the life experiences of an average person, there are many things that occur that could be stopped if the good would try to stop the evil. Often times, two parents of a household work and do not spend enough time with their children. Because the parents do not act as a good influence in the child’s life, the child may begin to do drugs, get bad grades, and become involved in crime. Each of these things is evil but could have been prevented if the parent had done something and acted as a good influence in the child’s life.

This is an example of how the good doing nothing allows the evil to triumph in the life of an average person. Also, many times there are bullies within a school who threaten other students with physical actions or language. Many times, these bullies go unreported because the good who are violated by the evil are scared of being known as a ‘tattle-tale.’ In each of these above cases, the good has the chance to prevent the evil from doing any damages, but chooses not to based upon their actions.

By attempting to do nothing, the good shows little concern for what the evil is capable of doing. In the above paragraphs, there are examples of good allowing the evil to triumph that result in death. Also, there are examples of things in which the evil does not offer as horrendous a consequence. Within either extremity, there always has and always will be problems of evil triumphing to an easy victory. Perhaps one should think twice about whether to let something evil go without notice. One must remember that, ‘The only thing necessary for the triumph of evil is for good men to do nothing.’ (Edmund Burke) 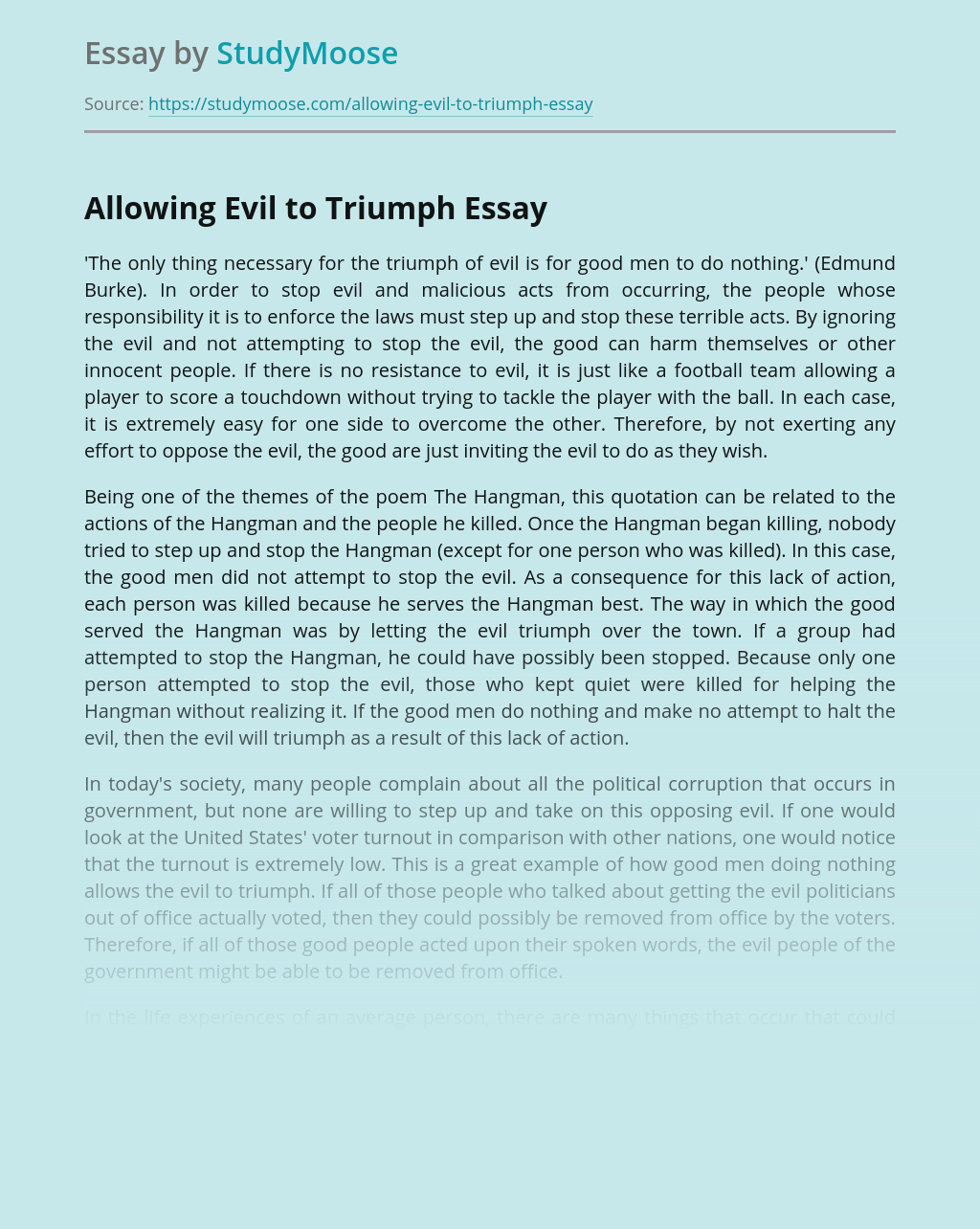 Turn in your highest-quality paper
Get a qualified writer to help you with
“ Allowing Evil to Triumph ”
Get high-quality paper
Helping students since 2015
Stay Safe, Stay Original