Wilma Rudolph Wilma Glodean Rudolph was born on June 23, 1940 to Ed and Blanche Rudolph. She was born in St. Bethlehem, Tennessee and raised in Clarksville, Tennessee. Wilma was born prematurely at 4. 5 pounds, the 20th of 22 other brothers and sisters. She and her mother were not permitted to be cared for at the local hospital, because of racial segregation. The hospital was for whites only and there was only one black doctor in Clarksville. The Rudolph’s budget was tight, so Wilma’s mother spent the next several years nursing Wilma.

Turn in your highest-quality paper
Get a qualified writer to help you with
“ Biography of Wilma Rudolph ”
Get high-quality paper
NEW! AI matching with writer

She was a sick child that had many childhood diseases, one illness after another: measles, mumps, scarlet fever, chicken pox and double pneumonia. Wilma is a miracle child, she wasn’t expected to live a long life. Her parents were hardworking people, but were very poor. Mr. Rudolph worked as a railroad porter and handyman. Mrs. Rudolph did cooking, laundry and housecleaning for wealthy white families, but when Welma was born she had to stay home nurse her child.

Millions of Americans were poor in 1940.

They were out of work and homeless because of the Great Depression. In the good run the Rudolphs managed to make ends meet by doing things like making the girls’ dresses out of flour sacks. Wilma was finally taken to the doctor when she was six years old, that is when her left leg and foot became weak and deformed. It was discovered that she was suffering from polio, a crippling illeness. The doctor told her family she would not walk again because polio was a crippling illness Williamson 2/English Class and Group (A1)] without a cure.

When they found out that horrible news Mrs. Rudolph did not give up on her ill child, she found out that Wilma could be treated at Meharry Hospital. Meharry Hospital was a black medical college in Nashville, Tennessee which was 50 miles away from their home. Mrs. Rudolph took Wilma there twice a week for two years, until she was able to walk with the aid of a metal leg brace. They couldn’t afford to take her there anymore, so the doctors taught Mrs.

Rudolph how to do the physical therapy exercises at home. By age 12, she could finally walk normally, without the crutches, brace, or corrective shoes. All of her brothers and sisters did everything to encourage her to be strong and work hard at getting well, which motivated her to become an athlete after she did. Her older sister was on a basketball team, and Wilma vowed to follow in her footsteps. While in high school, Rudolph was on the basketball team when she was spotted by Tennessee State track and field coach Edward S. Temple.

She had played for the first time in her sophomore year of high school, but she had been on the team ever since she started junior high. Since her high school didn’t have the funding for a track team, coach Temple invited Wilma to Tennessee State for a summer sports camp. Being discovered by Temple was a major break for a young athlete like Wilma, he knew he had found a natural athlete when he seen her play that day. While she was still attending high school, she became a basketball star, setting state records for scoring and leading her team to the state championship.

When she was 16, she earned a berth on the U. S. Olympic track and field team and came home from the 1956 Melbourne Games with an Olympic bronze medal in the 4 x 100 metres relay. After graduating from high school, Wilma received a full scholarship to Tennessee State. Because of all the celebrity she received from her track career, she took a year off from her studies to make appearances and compete in international track events. She returned and received a Bachelor’s degree in education, graduating in 1963. 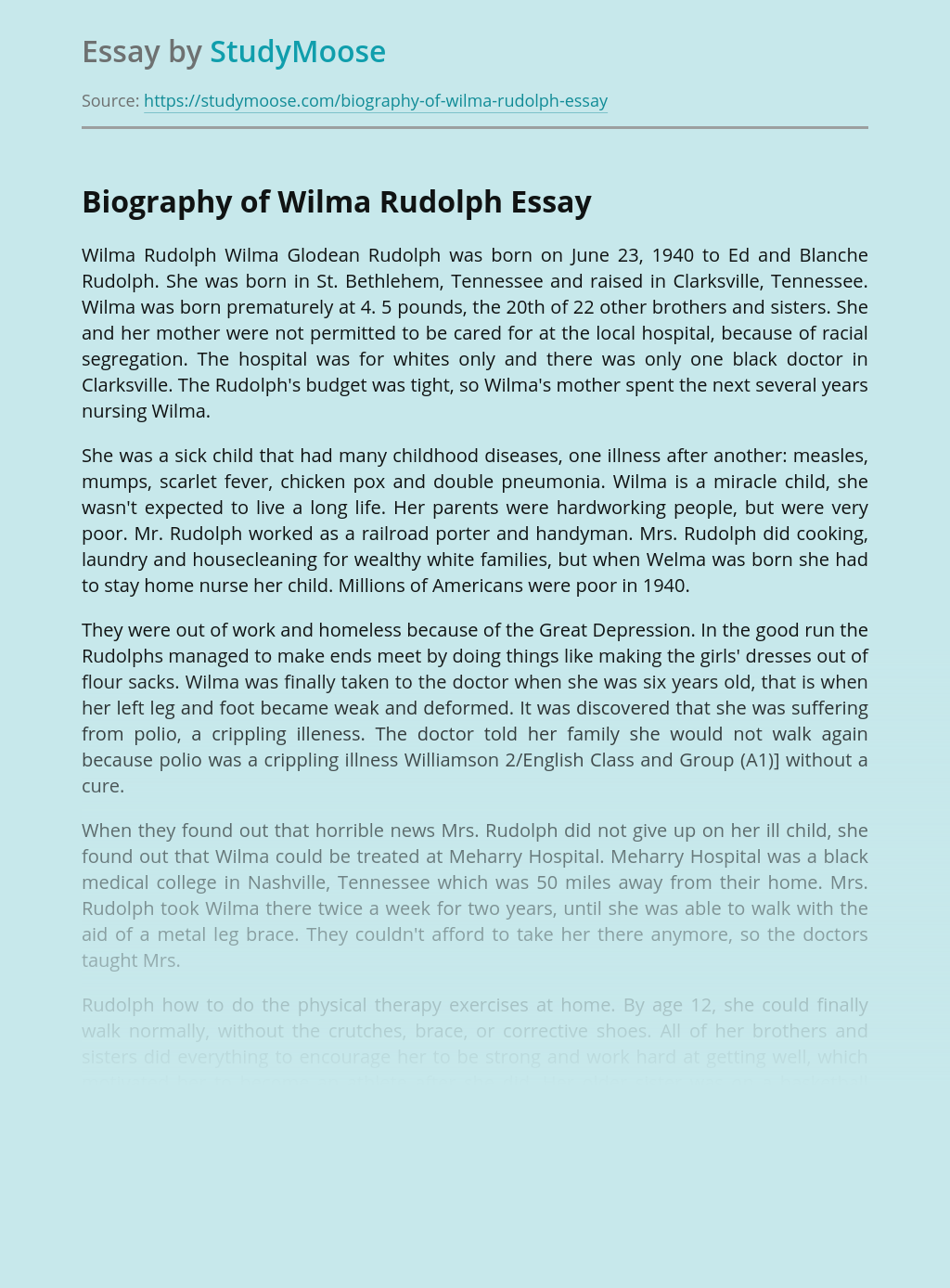 Turn in your highest-quality paper
Get a qualified writer to help you with
“ Biography of Wilma Rudolph ”
Get high-quality paper
Helping students since 2015
Stay Safe, Stay Original