Analysis of Men of Honor

Men of Honor, is based on the life story of a black man named Carl Brashear, played by Cuba Gooding Jr. , who though sheer determination reached a goal he’d always dreamed of and proved society wrong. This film thoroughly displays the determination Brashear has throughout tough times and the honor he gains from others who presented those tough times, also displaying the adversity Brashear overcomes because of the color of his skin. Men of Honor is about the life of Carl Brashear, and how he had always dreamed of becoming someone important.

Don't use plagiarized sources. Get your custom essay on
“ Analysis of Men of Honor ”
Get custom paper
NEW! smart matching with writer

As he loaded that bus for the Navy, he was determined to make a difference. When he saw the white men having fun swimming just off the side of the boat, he thought he? d enjoy himself too. A black man swimming with a white man was strictly prohibited and unheard of. When the captain of the boat saw how fast of a swimmer Brashear was, he offered him a better job working on the Navy boat, but Brashear wasn? t satisfied.

He decided he wanted to be a diver. Carl Brashear was the first black man to ever pass diving school.

The white men didn? make it easy on him, calling him a ? nigger? and not bunking with him. Although it may be difficult to believe that a man who was once pronounced dead on arrival could later become the first amputee diver to serve in the U. S. Navy as well as the first African-American to reach Master Diver status, Carl Brashear is the man who did just that.

The movie Men of Honor, released in 2000, starring Cuba Gooding Jr. and Robert DeNiro, only touches on the tremendous adversities that Carl Brashear has faced throughout his life.

His story is one of struggle and triumph, but his only goal was to follow his promise to his father, to succeed, no matter what obstacles were to overcome. The movie is stunningly close to the real life experiences of Carl Brashear, which is not really typical for a Hollywood movie. One reason might be that Brashear’s story is so incredibly amazing that a Hollywood storywriter could almost write it. Carl was born in 1931 and grew up with sharecropping parents, who lived in segregated Kentucky. He did not have the chance for a good education as whites had, and life in general was much harder for blacks anyway.

Analysis of Men of Honor. (2016, Oct 26). Retrieved from https://studymoose.com/analysis-of-men-of-honor-essay 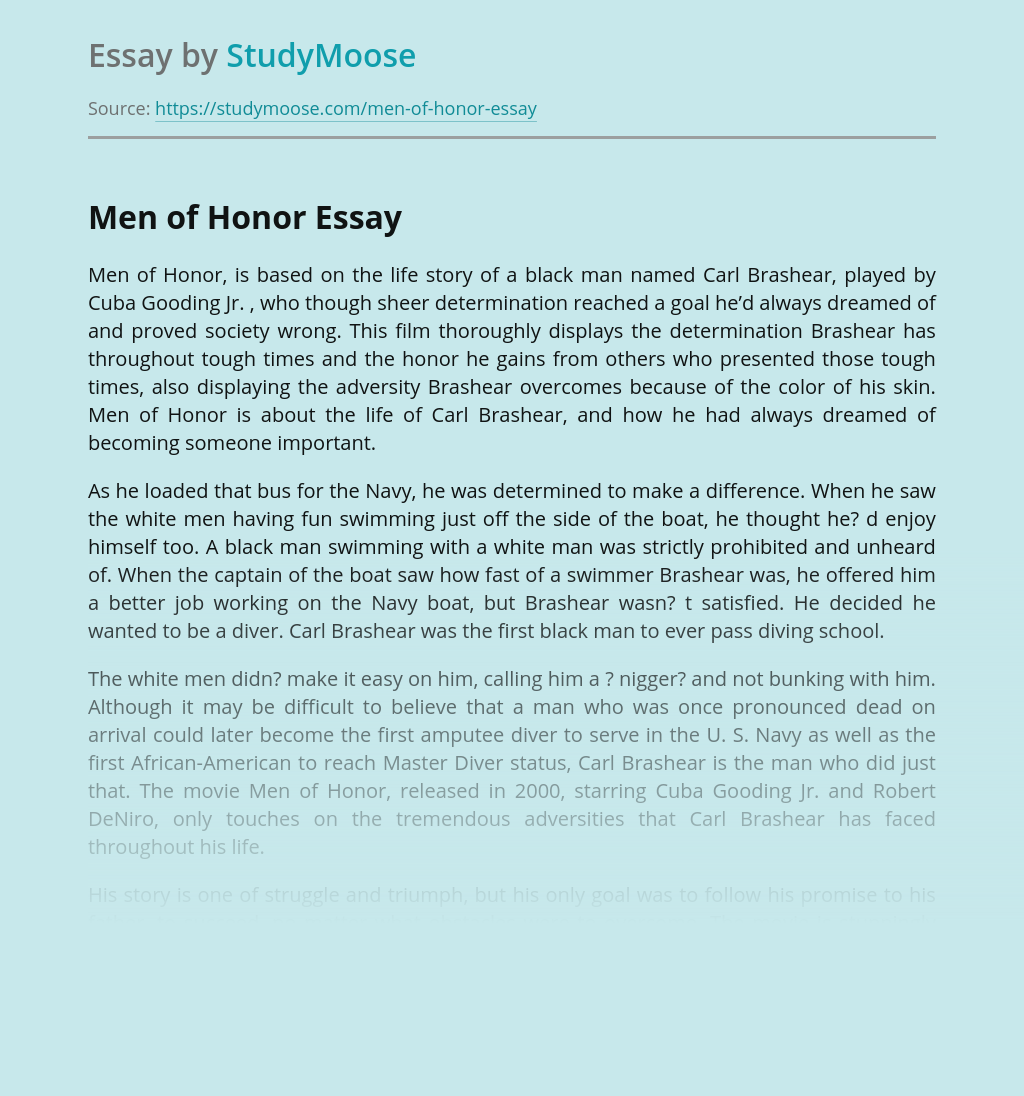