Do You Agree That People Should Be Allowed to Keep Potentially Dangerous Animals?

Since always people have kept animals as their pets. The animals like cats, dogs, fish or parrots have been considered as the most popular pets. However, recently people have become interested in an exotic animals. Keeping animals regarded as potentially dangerous is getting more and more trendy and this situation raises the question whether it is indeed dangerous or not. It is now a matter of public concern and debate. There are two the most popular arguments supporting the thesis that keeping the potentially dangerous animals is not a good idea.

Don't use plagiarized sources. Get your custom essay on
“ Do You Agree That People Should Be Allowed to Keep Potentially Dangerous Animals? ”
Get custom paper
NEW! smart matching with writer

The first of this is that the potentially dangerous animals may pose a threat to their owners’ life. Keeping an alligator or a snake in a house may have serious consequences. These animals can be extremely treacherous. Although such animals may seem to be tame, they still have their wild and unexpected nature and one day may seriously hurt or even kill an owner. The second argument refers to the life of these potentially dangerous animals.

These are animals which are taken over from their habitats often in an illegal way.

Not only the journey from their natural environment may be a traumatic experience but also their life in captivity later on. Their existence in cages or tanks can be simply called a suffering in a prison. On the other hand, people who keep an exotic animals learn a lot about them. They have many opportunities to observe their habits and routines. The more they learn, the more they can inform others.

They can for instance, counsel someone who considers acquiring such an animal.

In conclusion, it can be stated that there is many disadvantages of keeping an exotic animals. These animals are often potentially dangerous and yet they themselves suffer being basically imprisoned in cages. There is many discouraging arguments concerning keeping the potentially dangerous animals. Yet, there are also advantages of having such animals, but people should bear in mind that this kind of animals requires an extra care and safety precautions.

Do You Agree That People Should Be Allowed to Keep Potentially Dangerous Animals?. (2020, Jun 01). Retrieved from https://studymoose.com/agree-people-allowed-keep-potentially-dangerous-animals-new-essay 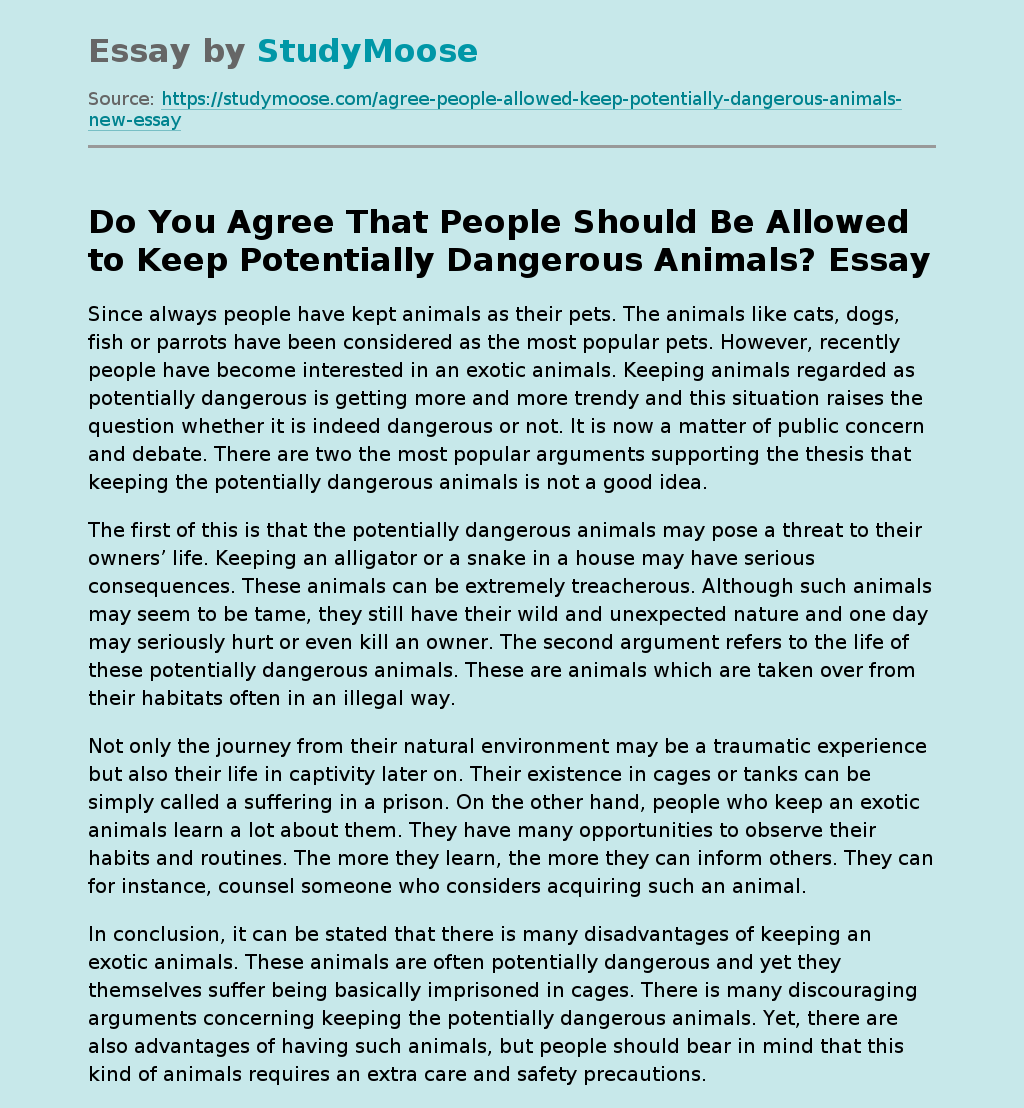