According to new research done in the field of linguistics and cognitive science, the balance is starting to tilt again in favor of linguistic relativity. This concept proposes that there is a systematic relationship between the nature of the language a person speaks and the way the person understands the world. Although, it is still not known how much influence language wields over thought, it is now agreed that it does affect the way we perceive and understand the world.

Don't use plagiarized sources.
Get Your Custom Essay on Culture and Communication Just from $13,9/Page

At an individual level, we take for granted the role language plays in our thought processes.

But, every time we formulate a thought, we almost subconsciously express it in a tongue we are most comfortable with. Language has, over our growth period (especially the formative early childhood years), become intertwined without cognitive faculties. A majority of our thoughts and memories employ language as an expression tool. As such, one must agree that it most influence our thought processes to a certain extent.

The intricate features of any language such as grammar and the role of gender to play a significant role on how we perceive the world.

Although this influence plays a lesser role when it comes to tangibles like objects for instance, it does have a significant influence on abstract concepts such as time, space and even political concepts. For example, Dan Slobin of the University of California in Berkeley tells us in Alison Motluk’s article You Are What You Speak that while a third of the world’s languages describe locations in absolute terms, many Pacific Islanders use phrases such as “north of that tree”.

Benjamin Whorf, one of the pioneers of linguistic relativity, in his famous analysis of the differences between English and Hopi language, claimed that a Hopi speaker would find relativistic physics easier to understand that an English speaker due to the structure of Hopi language. This facet of language becomes even more important when it comes to worldview and religion. As both of them are in essence, abstract concepts, it can be understood that language does have a significant relationship with them. One can for instance compare how the same religion is interpreted by groups with different languages.

Also, once we consider the use of metaphors in languages, we can see how they relate to people’s culture. As the worldview of a people is formed due to the shared experience of a people and the sharing of this unique experience largely employs language, it can be understood that language wields an influence over it. Coupled with the effect of language on an individual basis, one can clearly see the significance a person’s language plays on not only his/her own thought processes, but on the formulation of grander systems of thought. Therefore, one can conclude that language helps shape a people’s worldview and their understanding of religion.

The diversification in religion can then potentially create new religions due to conflicts with other prevalent interpretation. The extent of language’s influence can still be argued and should be argued until a conclusion can be reached. But all languages in general should be preserved as we never know when a particular language’s insight might come in handy for resolving modern problems. How has the internet changed global communication? What effect might this have on cross-cultural communication? The Internet probably ranks among one of greatest inventions man has yet made.

A relatively young invention, it has revolutionized global communication, and yet, its true potential remains to be seen. It has transcended geographical borders and provided people with a forum to convey their thoughts to the world, unfiltered and unregulated. It has led to the rise of new social groups, ones which have no need for proximity, and given rise to whole new cultures. Although global communication has existed for centuries, never before has it been observed at such an unprecedented scale. With the advent of the internet, rapid information sharing became possible and at virtually no cost.

Today, one can find material of any nature on the internet and can access it almost anywhere in the world. One can share information of any nature, be it audio or video or plain text. The fact that it’s unregulated allows people to channel their thoughts in the purest form possible. Social networking sites have created new online societies with their own set of rules and cultures. Instant messaging has provided us with a facility to engage in real time conversations with people from halfway across the world. Used in conjunction with webcams and microphones, we have in essence, the next best thing to face to face conversation.

As such, one can see that we are witnessing a new chapter in cross-cultural communication. The internet has the potential to bring people together, from diverse backgrounds, and to promote understanding regardless of geographical, religious, political and ethnic division. One can interact with people at an individual level and due to the vast spectrum of opinions that the internet holds, one can form a more neutral worldview. Hence, in theory, the internet should usher in a new age of global understanding and ultimately form a global worldview.

But there still is a catch to it all. Yes, in theory this should all be true, but there still are factors that hamper us all from achieving this. These begin with our own preconceived notions. The internet contains a lot of unregulated information. How do we decide what is true? We use our preconceived notions and hence keep our limited understanding of the world. Furthermore, the internet provides a highly selective information and communication tool, meaning that a person can choose what he/she wants to access and who he/she wants to talk to.

Furthermore, the vast majority of people in the world still lack access to the internet and of those that have access to it, a large number still lacks unregulated access. For example, countries such as China monitor internet content and limit access to sites which carry “inappropriate” material. As such, the internet is still far away from reaching its true potential. But this is no cause to lose hope. The internet is still in its infancy and it still has a lot more avenues to explore.

Also, if one is to consider the rate at which the internet has grown so far, one can conclude that it will grow a lot faster in the future. Perhaps ultimately, the internet will truly let us share our thoughts worldwide and finally transcend language and cultural barriers. If so, we can then truly reach a new era of global understanding and perhaps, create more than a global worldview; we can create a collective consciousness. In conclusion, the internet is an extremely powerful tool for global communication and will have far reaching consequences on cross-cultural communication. 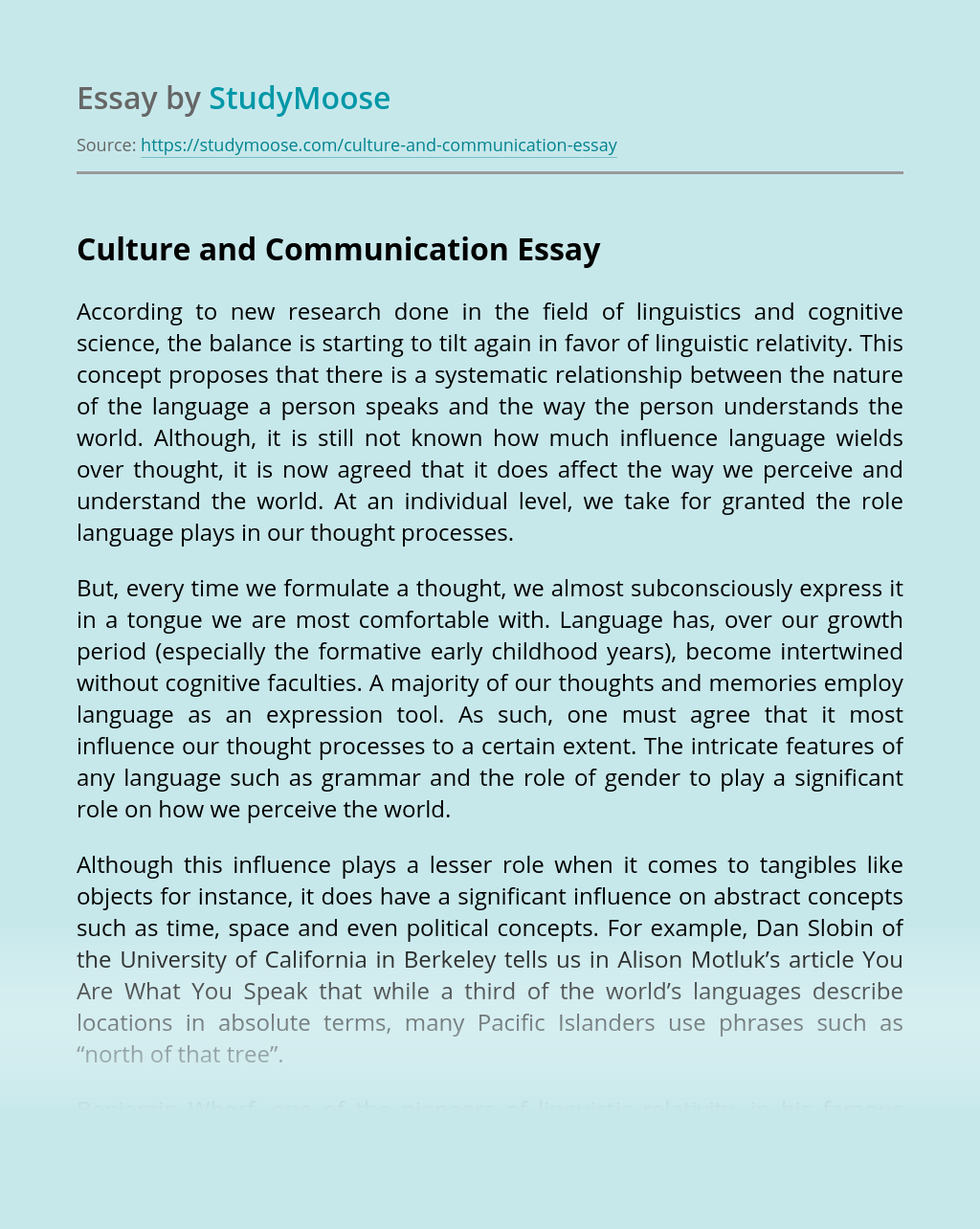 Rate this post Humanity has come far from its primitive beginnings. From sticks and stone wheels to the fantastic technology of today. Each tool made toward the betterment of life more wondrous – and many times more dangerous – than the next. Humans have come from stone tools to hydrogen bombs. Humanity has become so...

Rate this post D1. Develop productive working relationships with colleagues 4) How to identify conflicts of interest with colleagues and the measurements that can be used to manage or remove them A conflict of interest occurs when an individual or organisation is involved in multiple interests, one of which could possibly corrupt the motivation for...

Get Essay
Definition of Non-Verbal Communication

Rate this post Own working practice can affect children and young people’s development in many ways. Children learn trough impersonation, so it is important to always keep in mind that they need to have good role models. When I am working with children, I always remember to be encouraging and trust worthy. When working with...

Leading and motivating a team effectively