Communication and culture affect each other tremendously. Communication is about how people use a message to generate meanings within and across various contexts, cultures, channels, and media. For this essay, culture described as learned behaviors that are communicated from one generation to the next to facilitate individuals and social survival. Religion, history, values, social organizations, and language are the elements that compose culture. As we are born, we learn about the culture from our own group’s culture. We often learn the convention and traditions of culture from our parents.

Don't use plagiarized sources. Get your custom essay on
“ Culture in Verbal and Non Verbal Communication ”
Get custom paper
NEW! smart matching with writer

Besides, We also share beliefs, ceremonies, traditions, rituals, and assumptions with people who live in similar cultural backgrounds. As we all know, cultural background influences people’s views of other people, events, and things. Generally, people respond more to how we talk than what we say. So, culture plays an important role in shaping our communication styles.

Malaysia has three major races which are Malay, Chinese, and Indian. Malaysian Malays make up the majority of the population of Malaysia.

Therefore, our official language is Bahasa Melayu. The Malaysian Chinese also speak Chinese dialects such as Mandarin, Hokkien, Hakka, and Cantonese among their group. Besides that, Malaysian Indians speak Tamil and Hindi with each other among their group. Almost all Malaysian tend to use indirect communication as an extension of the need to preserve harmonious ties in verbal communication. We think first before deliver our messages to avoid offensive. We would choose the word that looks more respectful instead of the word that looks impolite before conveying our opinion.

For instance, I would say my friend looks chubby instead of fat in order not to make her feel inferior when she asks my opinion about her body size. Moreover, we are concentrating more on attitude, gesture, and tone of voice when conveying meaning and less focused on the word. The goal is to preserve the friendliness and respect during the discussion.

Furthermore, Malaysians will never give a direct “no” or a sarcastic response even though they do not agree with you as they worry about reputation and politeness. For example, when a friend who I feel uncomfortable with invited me out for lunch, I will hesitate, yet still agree to go out with her. Thus, we should rely more on hints of hesitation, listen carefully and double-checking our understanding for what others don’t say during the conversation. Also, speaking loudly usually considered disrespectful in Malaysia. Instead, we are expecting that people speak softly with our elders regardless of how the situation is. My parents had taught me that we should speak softly when converse with the elder to show our respect when I am a child. As a result, most Malaysian will always show their patience to the elder during the conversation. All shown above are the example of the culture of Malaysian in verbal communication.

Next, there are some examples of non-verbal communication for Malaysian’s culture. Firstly, Malaysian tend to focus on body language when communicating with others. For example, most of us would place our hands in our pockets or on our hips to indicate our fury. Secondly, we would not use our left hand to waving, eating, or offering a product to others. It is because the left hand considered dirty and used for cleaning after going to the toilet. Other than that, keep silent and listen to what others say would show our respect to them during the discussion. Also, pausing ourselves before giving others a response indicates we have put the question to proper thought and consideration. 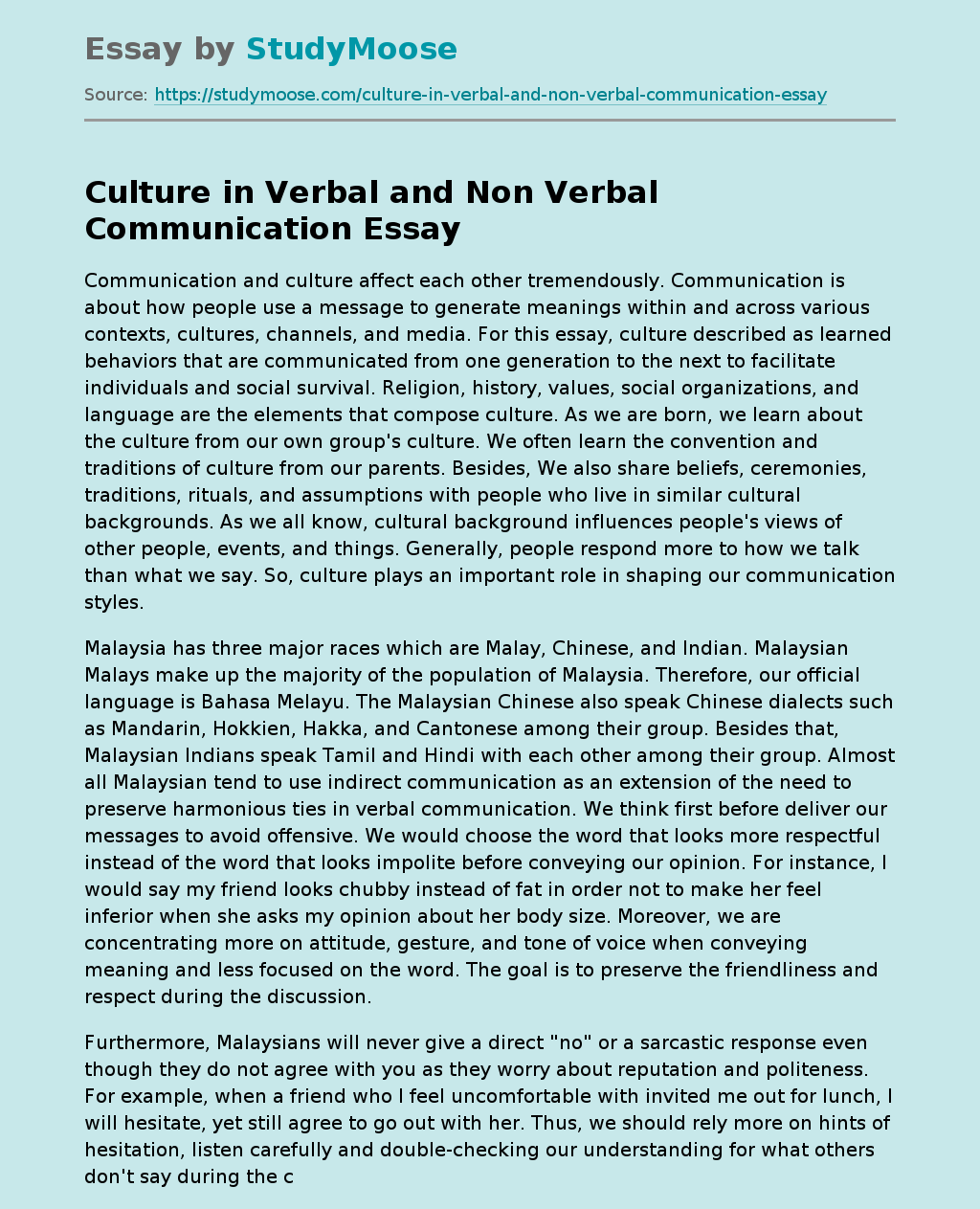