A few days ago I took a trip to my local mall and took a seat at the food court. My objective was to observe individuals engaging in non-verbal communication and document what I witnessed. After only a few minutes I became aware of a couple sitting within public distance, about 15-20ft away from me. They were having an argument about how the male was being cold and unaffectionate. While observing them I realized they were using various gestures while arguing.

I will inform you of what type they were and what they were conveying. During the argument, both individuals demonstrated affect displays.

These are facial expressions motivated by emotion such as a smile or frown. The female had a frown on her face to demonstrate that she was sad and discontent while informing the male that she was feeling lack of affection him. The male had what I can best describe as a half smile; imagine half of the mouth engaging in a smile while the opposite half stays normal.

He also kept looking around and rolling his eyes. These indicate that he believes that the female’s thoughts are unimportant or that they may be incorrect and he believes that he indeed is affectionate. Illustrators were used by the female.

Illustrators are gestures that complement our words such as pointing when giving directions. While talking about the male’s lack of affection, she constantly pointed at him with her index finger to further enhance the fact that she was talking about him.

When describing how she felt, she would put her hand over her chest for the purpose of indicating that she is talking about how she feels. When the male finally decided he was going to speak, he used regulators. Regulators are gestures that may prolong or terminate the conversation such as looking at your watch, walking away or nodding and leaning forward.

He raised his hand with the purpose of making the female stop talking so he could say something. The female felt that the gesture was disrespectful and noted it verbally, then continued talking about the issue as if what he had to say could wait. The male used another regulator; he leaned forward and opened his mouth. The purpose of this was to communicate to the female that he would like her to stop talking so he could say something. After the male verbally communicated that he doesn’t believe that he is being cold and unaffectionate, the female used an emblem.

Emblems are gestures that have a direct verbal translation and can stand alone such as the “ok” sign. She twisted her head to the right and then to the left repeatedly indicated “No, I disagree with you”. The male put his hand out in front of him, palms facing up and tilted his head up, this combination of gestures is usually translated into “what? ” or “why? ”, in this situation, it means “why? ”. Near the end of this argument, a couple of adaptors were utilized. Adaptors are gestures that make you feel more comfortable in a communication situation such as twirling your hair or tapping your fingers.

While the female mentioned various situations where the male is unaffectionate she puts her elbows on the table and massages the sides of her head with her hands, I believe she did this to relief tension she was feeling from the argument in order to feel more comfortable. The male decided that her reasons for feeling that he is unaffectionate are legitimate. While verbally communicating that he agrees with her and he will make changes, the female reaches her hand out and holds his, further seeking comfort now that the argument has been settled.

In conclusion, it is evident that non-verbal communication is constantly happening around us, all we have to do is look for it. As you read, by simply sitting down at the local mall’s food court I was able to observe a couple using the five different types of gestures which are: emblems, illustrators, affect displays, regulators and adaptors. Most of them occurred multiple times during the argument I was observing. After understanding that different types of gestures, it is very easy to identify them in everyday life. 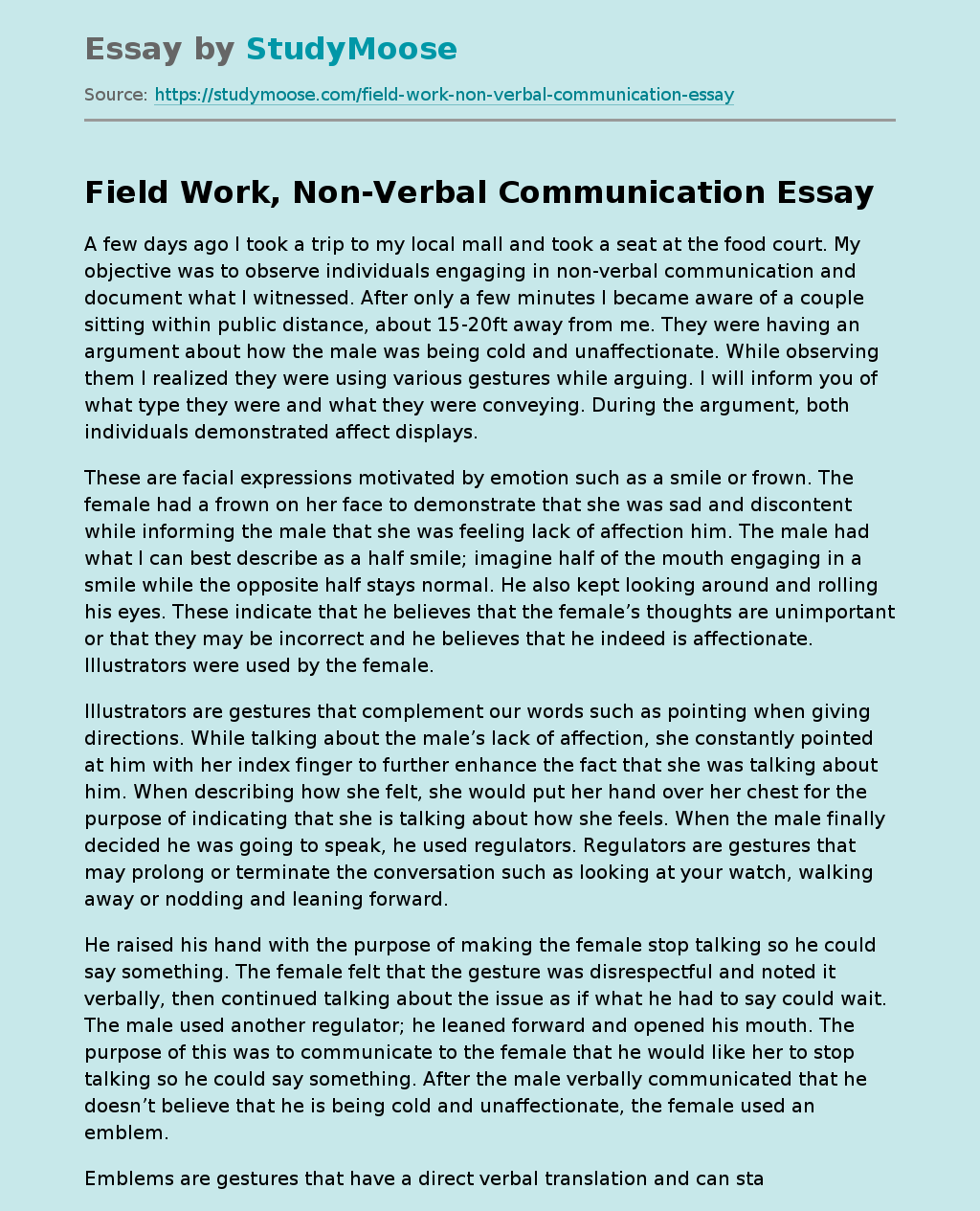