Non-Verbal Behaviour and Gestures in "A Streetcar Names Desire"

Task: Tennessee Williams uses very specific and detailed stage directions to indicate the emotions, thoughts and actions of his characters. Select a character from the play and discuss how his/her gestures and non-verbal behaviour serves to further reveal his/her personality traits. You might also add how his/her behaviour relates to the surroundings and cultural setting. The essay is based on Scenes 1 and 2. Word limit: 800

Tennessee Williams uses very specific and detailed stage directions to indicate the emotions, thoughts and actions of his characters in his famous play “A Streetcar Named Desire”.

Turn in your highest-quality paper
Get a qualified writer to help you with
“ Non-Verbal Behaviour and Gestures in “A Streetcar Names Desire” ”
Get high-quality paper
NEW! AI matching with writers

We communicate with much more than words. Most of the messages we send other people are nonverbal, these include our facial expressions, gestures, eye contact, posture, and tone of voice. The ability to portrait nonverbal communication in a play, or body language, is a powerful tool which can be utilized by any author to enhance the reading experience and give the play, even though it is just on paper in words and not enacted a deeper setting and a more natural interaction with the character.

It acts like an unconscious language that broadcasts the character’s true feelings and intentions at any given moment.

Blanche DuBois is no different in this respect to the extent that her actions speak more for her than she does verbally, considering her being a very talkative person. In the first Scene Blanche arrives at Elysian Fields to visit her Sister Stella, here the first sign of non-verbal behaviour can be observed.

Blanche gives Eunice, the co-owner of Stella’s house and up-stair neighbour, a peculiar look as she enters the house, which she first doubted to believe was in fact her Sister’s due to its weathered grey and raffish appearance.

This immediately causes a reaction on Eunice’ part resulting in a defensive tone of voice. “EUNICE [defensively, noticing BLANCHE’S look]: It’s sort of messed up right now but when it’s clean it’s real sweet.” – pg. 4 The defensive tone and the knowledge of Blanche’s “look” reveals that Blanche is used to living in a clean home, perhaps a bigger one with no neighbour on the second floor. It gives the reader the impression that she feels she has entered a house not up to her standards. This awareness directly influences the way the reader reads the next line, Blanche’s reply. “BLANCHE: Is it?” – pg. 4

Even though the author has not indicated a particular tone, the reader automatically may jump to a sarcastic one, developing the reader’s first impression of Blanche further solely due to the non-verbal message sent by Eunice through her tone of voice.

The next instance is fully described by Tennessee Williams in one of his many stage directions right after Eunice leaves to hustle up Stella and tell her that her Sister Blanche has arrived. Alone in the house now, “Blanche sits in a chair very stiffly and her shoulders slightly hunched and her legs pressed close together and her hands tightly clutching her purse as if she were quite cold.” – pg. 5 Her posture exposes her inner feeling towards the situation and new environment she currently is in. She feels awkward in this estranged, messy house; her hunched shoulders and pressed legs expression anxiety and uneasy adaptation to the location. Her clutching her purse, valuable belongings, may also display intimidation or mistrust to a certain extent, but this is not directly hinted by the author.

Perhaps it is her next action that plays a crucial part in understanding Blanche or having a better idea of the kind of person she really is. “…she begins to slowly look around. (…) Suddenly she notices something in a half-opened closet. She springs up and crosses to it, and removes a whisky bottle. She pours a half tumbler of whisky and tosses it down. She carefully replaces the bottle and washes the tumbler at the sink. Then she resumes her seat in front of the table.” – pg. 5 This short action tells us a number of different things about Blanche; she is a secretive and cautious person, she washes the glass and replaces the bottle to its original place as if nothing had happened. She does not feel guilty of using the situation to her advantage, she enjoys it. And last but not least, the reader is hinted at that she is not the person she may seem to be from the perspectives of the other characters; she is the secret alcoholic, addict without a strong sense of self control.

Later on in Scene two Blanche reveals another facet to her character – she flirts with Stella’s husband Stanley Kowalski and later even tells her about it. But that is verbal; the non-verbal component to this is in the stage directions: “[She sprays herself with her atomizer; then playfully sprays him (Stanley) with it. He seizes the atomizer and slams it down on the dresser. She throws back her head and laughs.]” I am not sure whether one would describe “playfully spraying” as a gesture, but either way it is non-verbal and leads to the direct assumption that Blanch is in fact flirting with her Sister’s husband, quite openly. It is something that usually people simply don’t do; it tells the reader that she is a character with a weak moral stem and an interest for men which outweighs her social values and family relationships.

Her body language as she “throws back her head” also points towards feeling comfortable and not intimidated under Stanley’s presence and insinuates a further relation with him that may come out later on in the play. The significance of this is not yet known at the end of Scene 2, but it leads the reader to believe she may have an eye out for her Sister’s husband. The non-verbal behaviour and gestures throughout the first two Scenes of this play are more important than one may imagine. They give depth to every characters personality traits and have a direct impact on the way the reader categorizes them and in turns the tone the reader then reads their lines in.

Non-Verbal Behaviour and Gestures in "A Streetcar Names Desire". (2016, Oct 31). Retrieved from http://studymoose.com/non-verbal-behaviour-and-gestures-in-a-streetcar-names-desire-essay 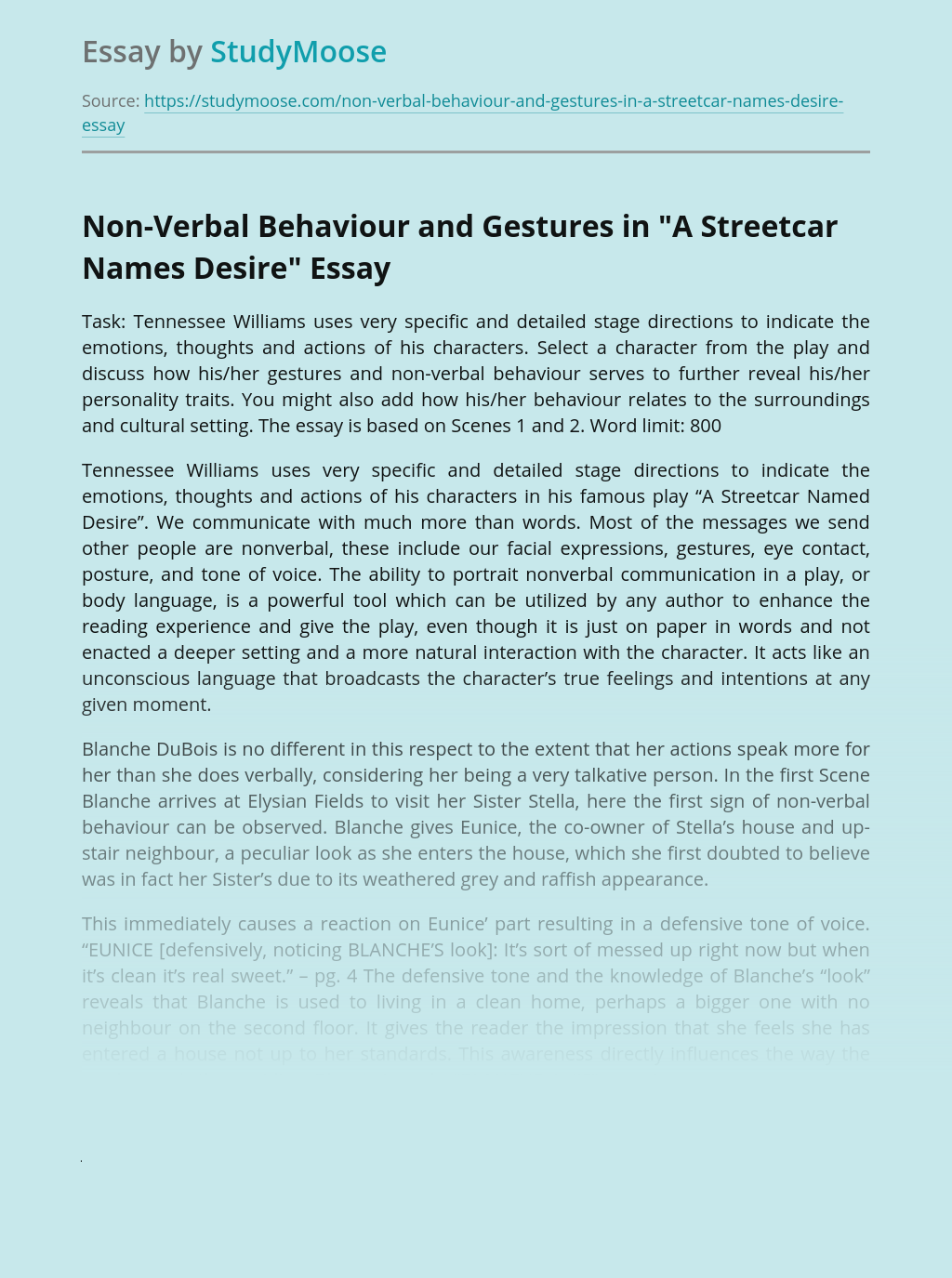 Turn in your highest-quality paper
Get a qualified writer to help you with
“ Non-Verbal Behaviour and Gestures in “A Streetcar Names Desire” ”
Get high-quality paper
Helping students since 2015
Stay Safe, Stay Original