The nonverbal communication is the process of communication by sending and receiving messages without words. These messages can be communicated through gestures, body language or posture, facial expression and eye contact, communication of objects such as clothing, hairstyles or even the architecture, symbols or graphics, as well as through an aggregate of above, such as communication behavior.

Don't use plagiarized sources. Get your custom essay on
“ Definition of Non-Verbal Communication ”
Get custom paper
NEW! smart matching with writer

Nonverbal communication plays a key role in the daily life of everyone.

In humans, the nonverbal communication is often paralinguistic i.e. verbal information accompanying the nuanced, extending it or by sending mixed signals.

According to experts, a substantial portion of our communication is nonverbal. Every day, we respond to thousands on nonverbal cues and behaviors including postures, facial expression, eye gaze, gestures, and tone of voice. From our handshakes to our hairstyles, nonverbal details reveal who we are and impact how we relate to other people.

Scientific research on nonverbal communication and behavior began with the 1872 publication of Charles Darwin’s The Expression of the Emotions in Man and Animals.

Since that time, there has been an abundance of research on the types, effects and expressions of unspoken communication and behavior. While these signals are often so subtle that we are not consciously aware of them, research has identified several different types of nonverbal communication. In many cases, we communicate information in nonverbal ways using groups of behaviors. For example, we might combine a frown with crossed arms and unblinking eye gaze to indicate disapproval.

Deliberate movements and signals are an important way to communicate meaning without words. Common gestures include waving, pointing, and using fingers to indicate numeric amounts. Other gestures are arbitrary and related to culture.

Paralinguistics refers to vocal communication that is separate from actual language. This includes factors such as tone of voice, loudness, inflection and pitch. Consider the powerful effect that tone of voice can have on the meaning of a sentence. When said in a strong tone of voice, listeners might interpret approval and enthusiasm. The same words said in a hesitant tone of voice might convey disapproval and a lack of interest.

Posture and movement can also convey a great deal on information. Research on body language has grown significantly since the 1970’s, but popular media have focused on the over-interpretation of defensive postures, arm-crossing, and leg-crossing, especially after the publication of Julius Fast’s book Body Language. While these nonverbal behaviors can indicate feelings and attitudes, research suggests that body language is far more subtle and less definitive that previously believed.

People often refer to their need for “personal space,” which is also an important type of nonverbal communication. The amount of distance we need and the amount of space we perceive as belonging to us is influenced by a number of factors including social norms, situational factors, personality characteristics and level of familiarity. For example, the amount of personal space needed when having a casual conversation with another person usually varies between 18 inches to four feet. On the other hand, the personal distance needed when speaking to a crowd of people is around 10 to 12 feet.

Looking, staring and blinking can also be important nonverbal behaviors. When people encounter people or things that they like, the rate of blinking increases and pupils dilate. Looking at another person can indicate a range of emotions, including hostility, interest and attraction.

Communicating through touch is another important nonverbal behavior. There has been a substantial amount of research on the importance of touch in infancy and early childhood. Harry Harlow’s classic monkey study demonstrated how the deprivation of touch and contact impedes development. Baby monkeys raised by wire mothers experienced permanent deficits in behavior and social interaction. Touch can be used to communicate affection, familiarity, sympathy and other emotions.

Our choice of color, clothing, hairstyles and other factors affecting appearance are also considered a means of nonverbal communication. Research on color psychology has demonstrated that different colors can evoke different moods. Appearance can also alter physiological reactions, judgments and interpretations. Just think of all the subtle judgements you quickly make about someone based on his or her appearance. These first impressions are important, which is why experts suggest that job seekers dress appropriately for interviews with potential employers. 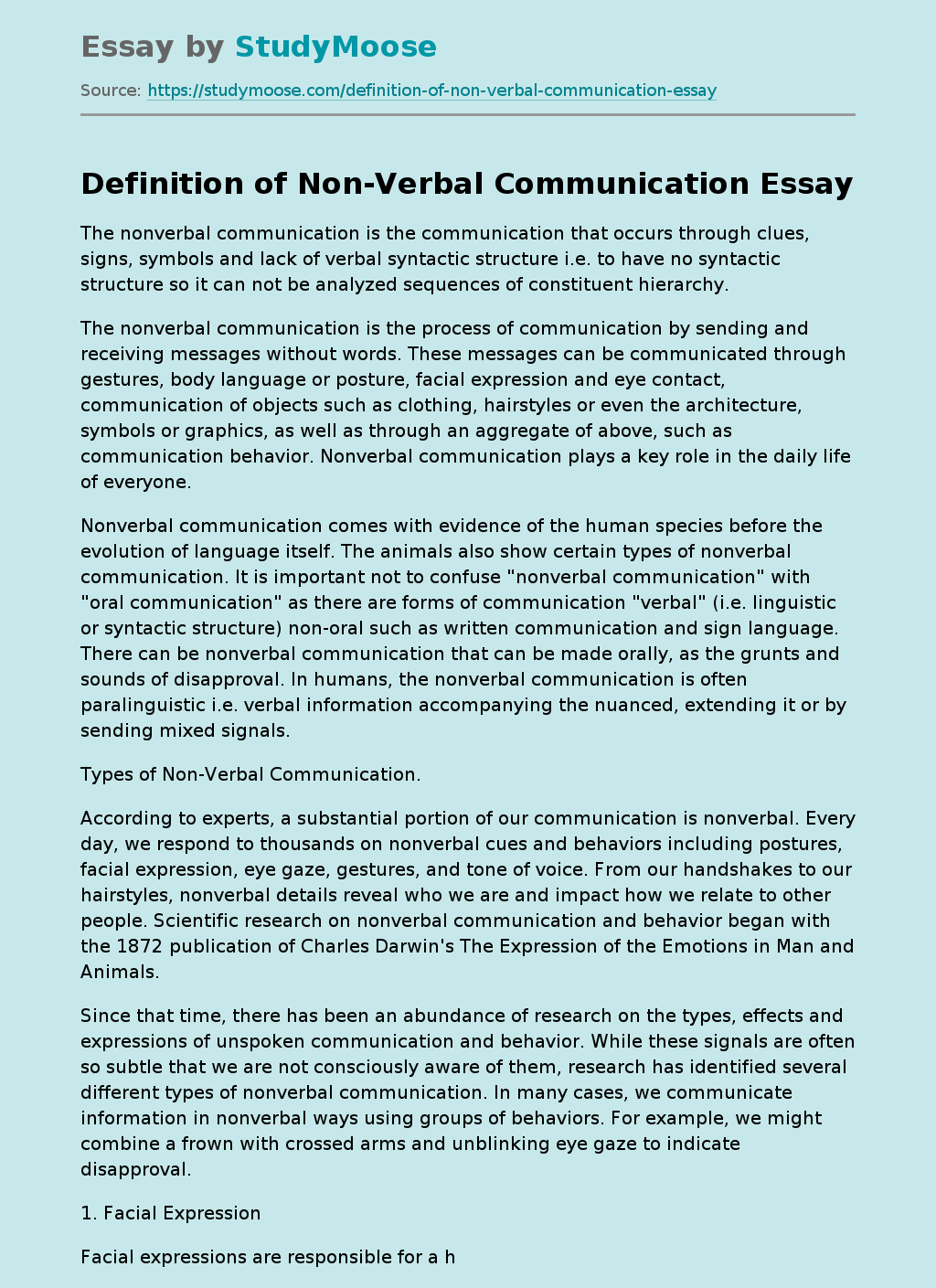